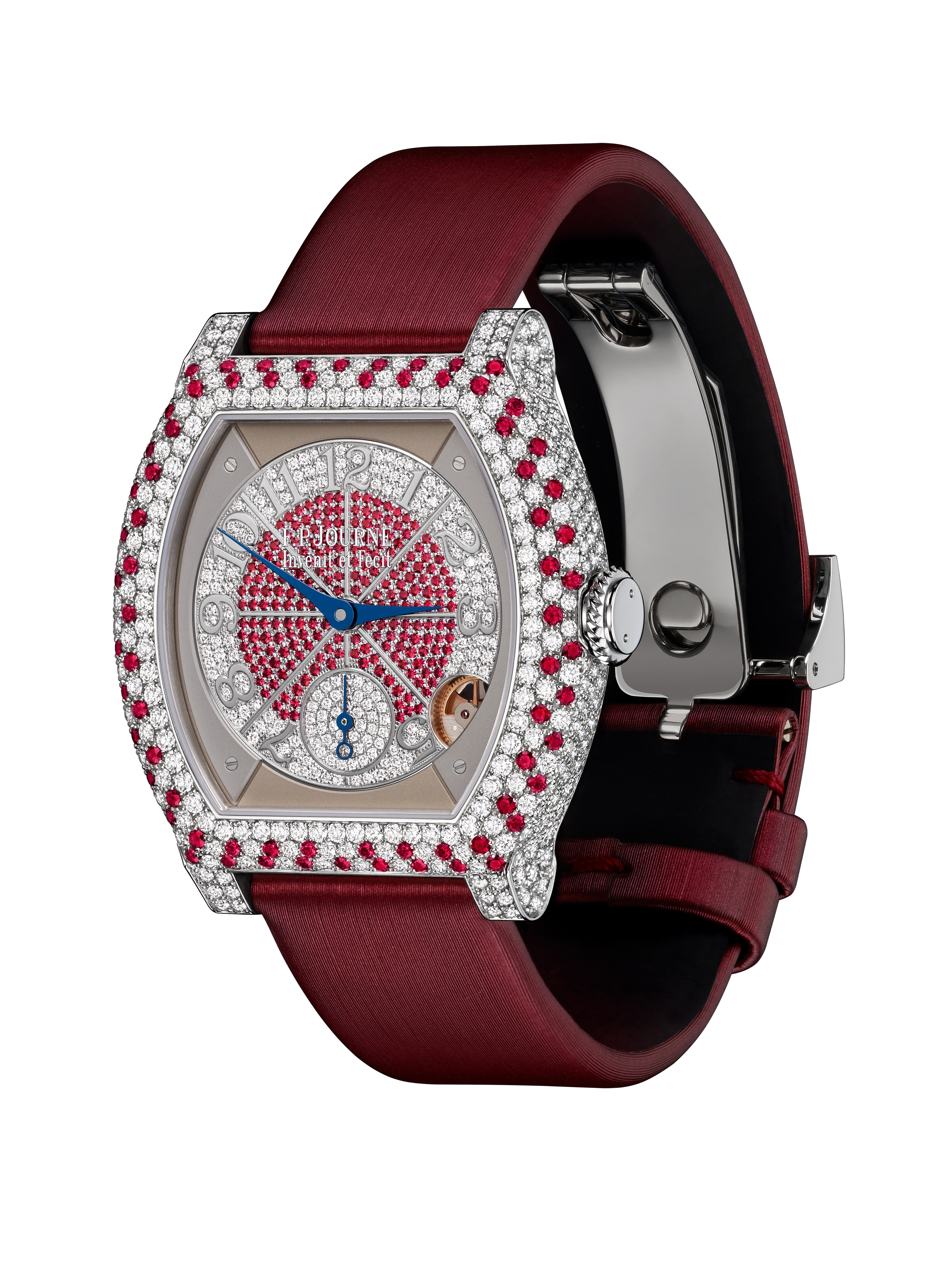 F.P. Journe introduces a new feminine and sensuous version of the élégante Joaillerie set with diamonds and multi-color precious stones to sublimate women’s wrists.
It took eight years of research for F.P. Journe to develop this horological concept with extremely precise requirements, leading to this gem of innovation, technical performance, precision and comfort.

The 40 mm Platinum patented flat Tortue case is pave-set with diamonds intertwined with rubies, blue sapphires, tsavorites or black diamonds. The dial is also set with similar stones and a diamond hour circle. The black diamond version features an opposite setting which makes the numerals in this version stand out more than in the coloured ones. The functions include central hours and minutes and a small seconds at 6 o’clock.
The case is made from platinum, features a transparent sapphire back and is water resistant up to 3 bar. 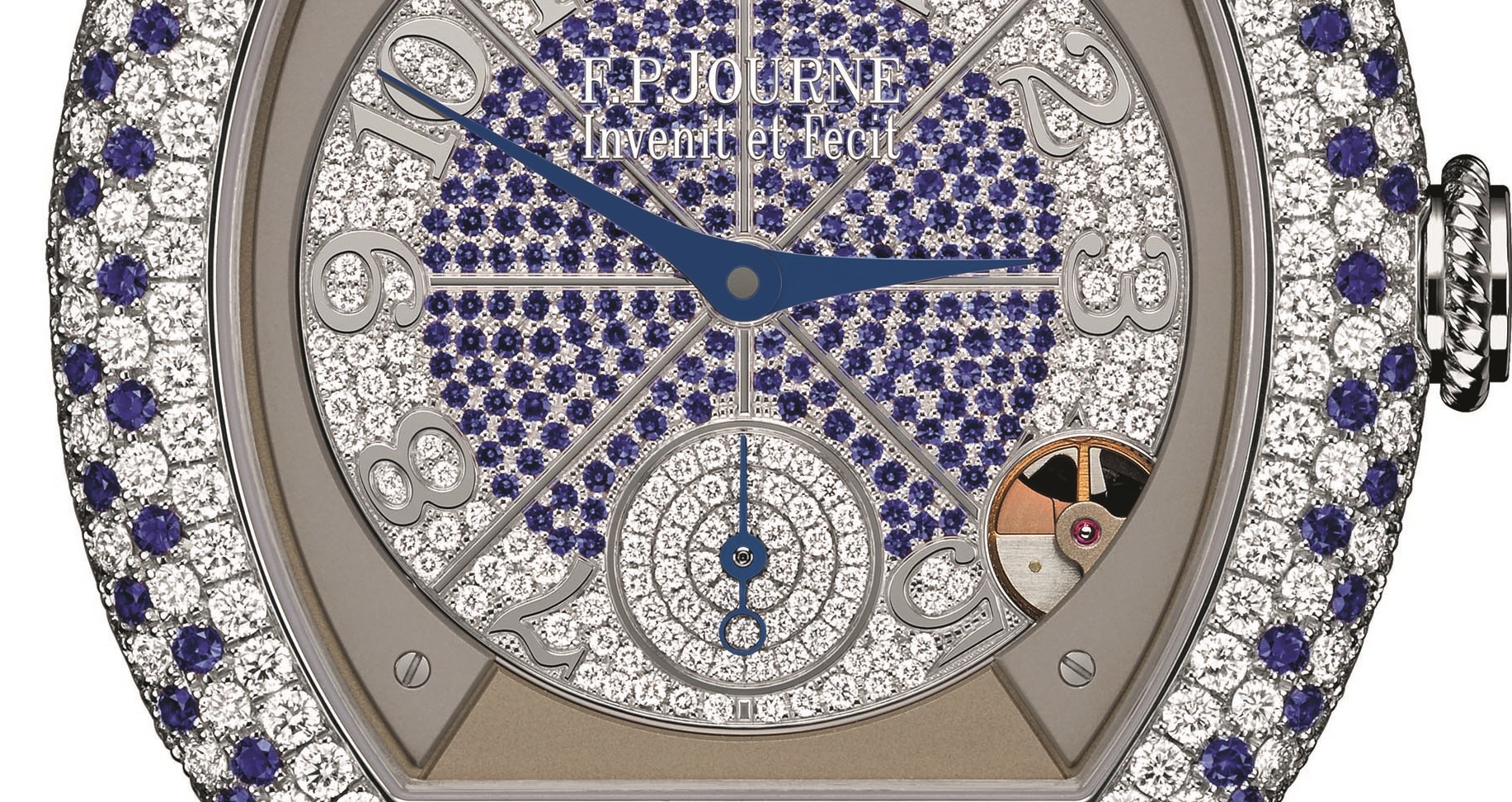 The élégance by F.P. Journe was designed and conceived to provide this watch with a very long autonomy of 8 to 18 years depending if in daily use or in standby mode.
The élégance embodies the intelligent watch. The electro-mechanical movement is fitted with a mechanical motion detector visible on the dial at 4.30. After 30 motionless minutes, the watch switches to standby mode in order to save energy and its hands stop turning. During the standby mode, the microprocessor continues to measure time, but the mechanical elements – gear train, rotors and hands, stop moving. As soon as the watch is worn again, the hands automatically set themselves to the correct time, taking the shortest path, whether clockwise or counter-clockwise. The movement, responsible for it all, is the calibre 1210, a quartz movement working at 32.768 Hz.

A watch that allows time to be stopped and started again is the dream not only of watchmakers but of watch-enthusiasts as well. Downright magic on your wrist. And the gems in this collection are a sparkly bonus.
The Élégante New Jewellery Collection is completed by powdered satin bracelets of matching colours. The folding clasps are also set with diamonds. 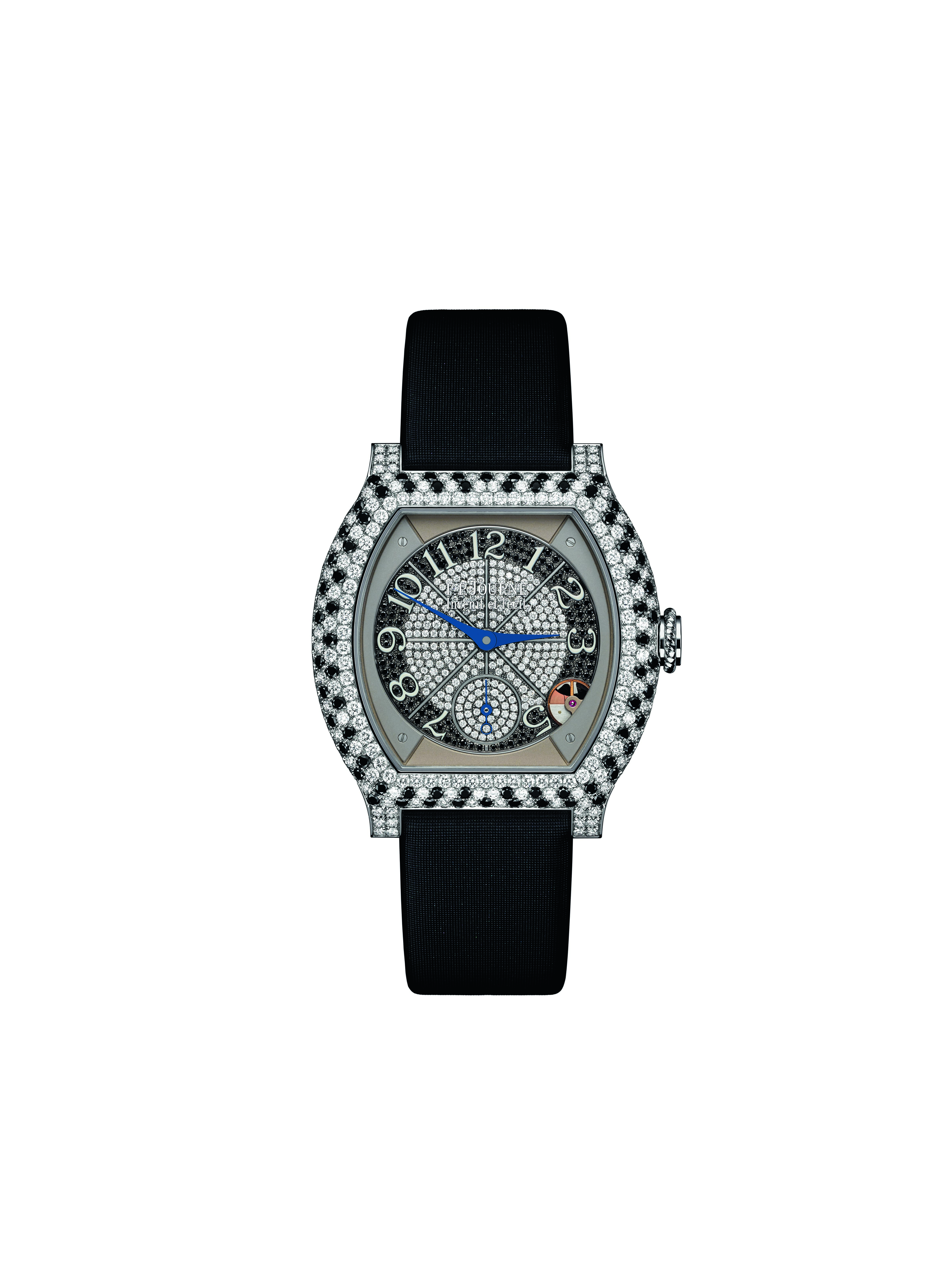 The dial of the new model is made of blackened silver with ample apertures and black-tinted, semi-transparent sapphire-crystal glass. The special clothing applied to the glass blocks most of the visible light but not the UV spectra that „charge“ the luminous pigments on the outsize-date mechanism and cause them to glow in the dark. The tens cross is coated with a white luminous compound and printed with black numerals. Conversely, the units disc, also featuring black numerals, is made of transparent glass and rotates in front of the luminous background of the date aperture.

Different from Lange’s previous moon-phase models with solid-gold lunar discs, the Grand lange 2 Moon Phase „Lumen“ has a disc made of glass. Initially, its surface is treated with a coating process. In a second step, a laser is used to cut out 1164 stars and the moon. Thanks to the luminous compound behind the lunar disc, they shimmer with vibrant radiance.
The large moon-phase display occupies a prominent position on the main dial. Once properly set, it only needs to be corrected by one day every 122.6 years. Between one and four o’clock A. Lange & Söhne placed a big power-reserve indicator, at five o’clock there’s a small second.

The watch is powered by he manually wound calibre L095.1. It is elaborately finished, the three-quarter plate made is decorated with Glashütte ribbing. The large mainspring barrel delivers power for 72 hours.
The calibre is housed in a 41-millimetre platinum case.

The Grand Lange 1 Moon Phase „Lumen“ is a limited edition of only 200 watches. 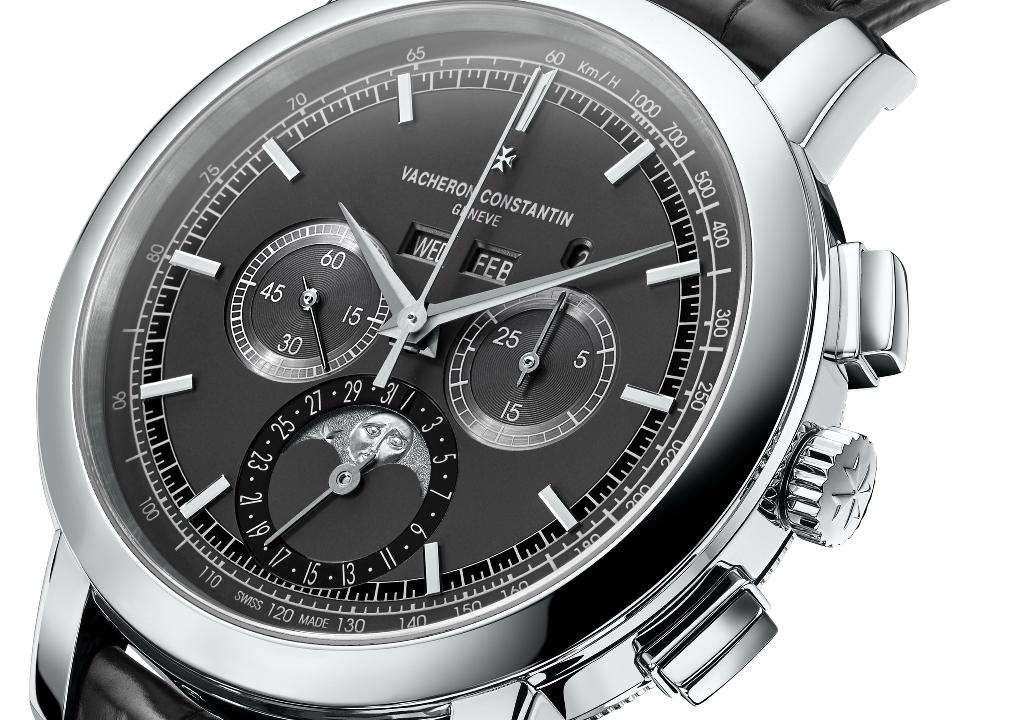 Vacheron Constantin has introduced a whole range of new models at this year’s SIHH. We cannot cover them all, but we just have to introduce the new interpretation of one of the manufacture’s most iconic timepieces: the Traditionelle Chronograph Perpetual Calendar.

The Traditionelle Chronograph Perpetual Calendar is one of the best-known models within Vacheron Constantin’s collection. The new version is available in platinum and pink gold and it combines two key complications – the chronograph and the perpetual calendar – and is powered by the new calibre 1142 QP. This watch leaves nothing to be desired.
The case hasn’t changed, it is still classically round and stepped while bearing the distinctive fluted pattern on its back. 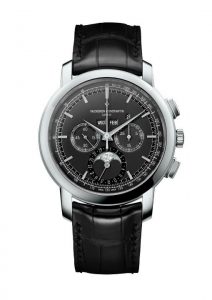 The dial is characterized by the dauphine-style hands and the railway-typed minute track. A white or black tachymeter scale surrounding the dial accentuates the technical nature of the watch.
Exemplifying a concern for legibility, the dial features various shades of grey with finishes that differ according to the functions, reflecting the layout of 1940s Vacheron Constantin chronographs. Standing out against a slate- or silver-coloured opaline base, the small seconds and chronograph minutes counters are distinguished by a circular-brushed ring with snailed centre.
The white or pink gold moon disc is hand-finished. Positioned in the centre of the date counter, it provides a symbolic depiction of a moon face that is alternately smiling or melancholy, depending on the path of the Earth’s satellite. This is a nod to historical pocket watches. 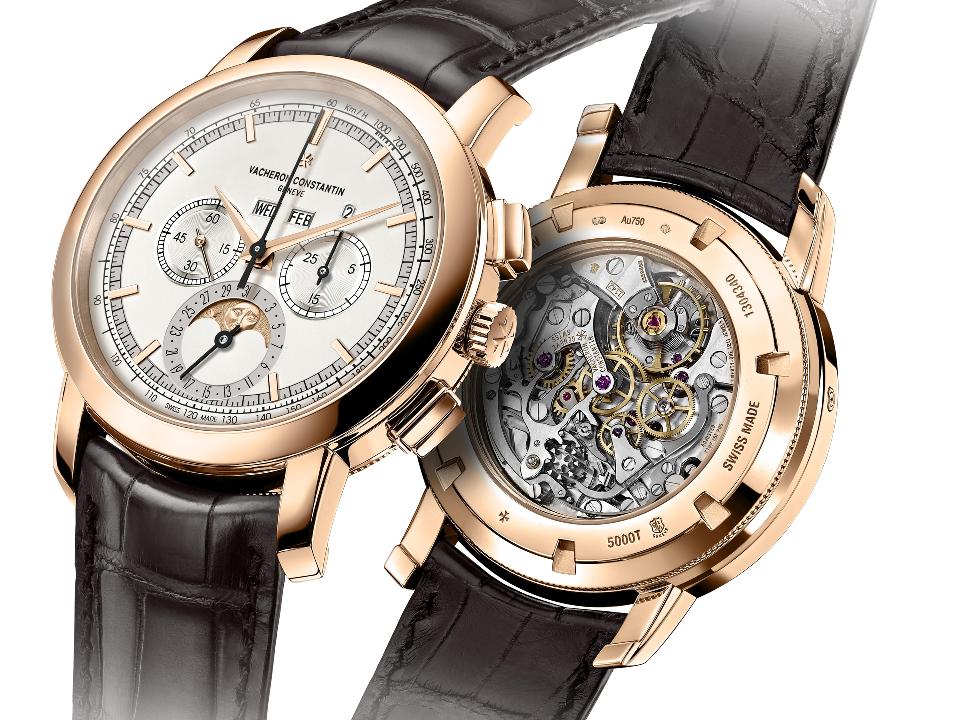 The sophisticated aesthetic approach is matched by the technical evolution embodied in the movement of the Traditionelle Chronograph Perpetual Calendar. The 1141 QP is replaced by the 1142 QP, a state-of-the-art movement entirely designed and developed within the Vacheron Constantin manufacture. The new movement drives the perpetual calendar functions – with indications of the days, date, months, leap years and moon phases – as well as the chronograph functions with a direct-drive seconds hands and 30-minute counter at 3 o’clock, positioned opposite the small seconds at 9 o’clock. This watch will be able to keep track of all the vagaries of the calendar without any need for adjustments until March 1st 2100.
With the development of this new caliber, the watchmakers and developers have been attentive to the energy constraints relating to the chronograph functions, in order to minimize their impact on the 48-hour power reserve.  The oscillation frequency of the balance has also ben raised from 2.5 Hz to 3 Hz so as to increase reliability and shock resistance.
The Traditionelle Chronograph Perpetual Calendar comes with a sapphire crystal caseback to allow a glance on the movement.

The chronograph comes with a leather bracelet. 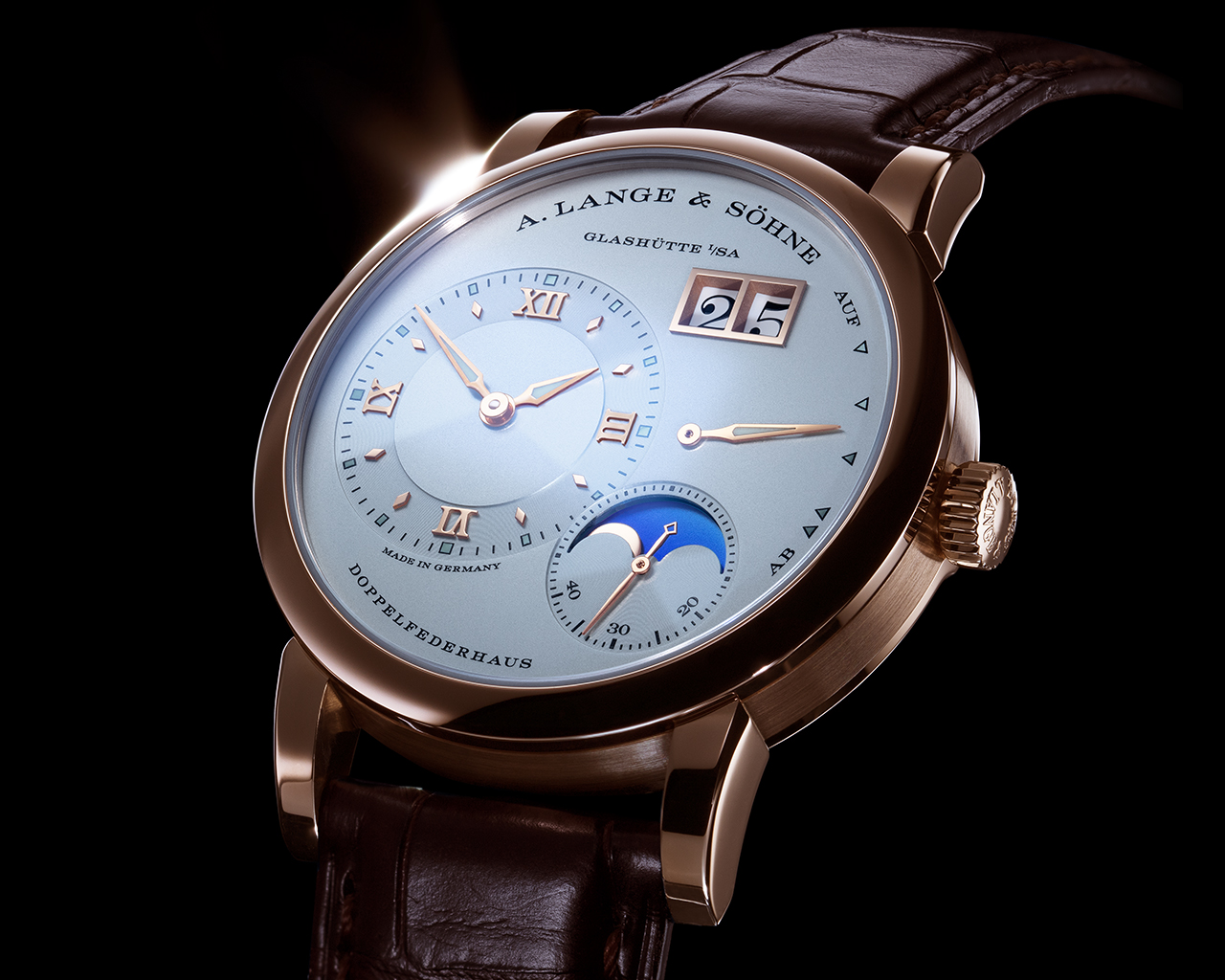 The arrangement of the moon phase display is based on a new, particularly realistic concept. A separate solid-gold moon pursues its orbit in the foreground. Behind it, a celestial dis – also made of solid gold – performs one revolution every 24 hours. On the disc, the different times of day are represented by varying blue hues caused by interference effects. During the day, it shows a bright sky without stars, while at night it depicts a dark sky with prominently contrasting laser-cut stars.
The lunar cycle endures 29 days, 12 hours, 44 minutes and 3 seconds on average. The Lange 1 Moon Phase displays it so accurately that it takes 122.6 years for the display to deviate from the true synodic period by just one day. 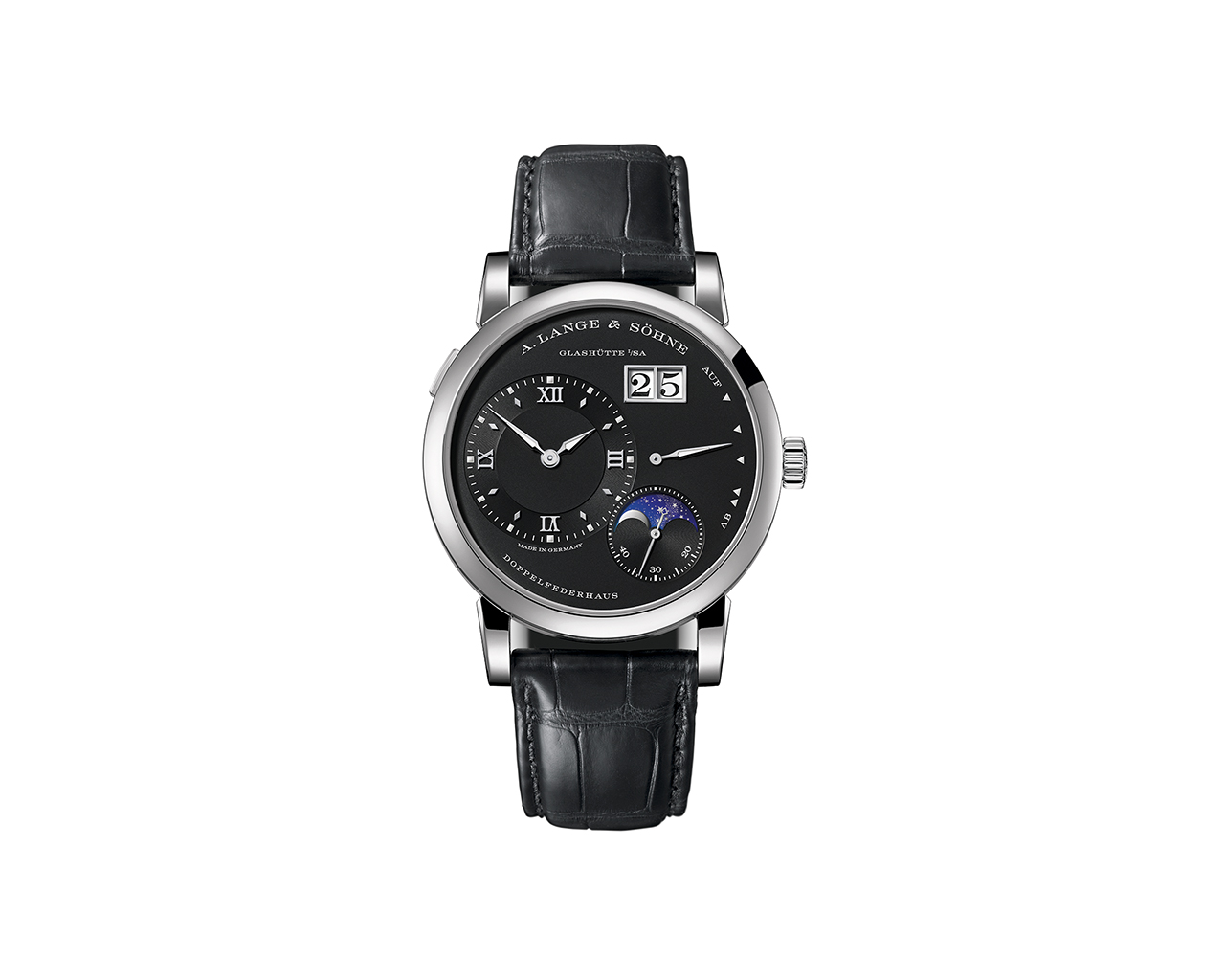 The asymmetric solid-silver dial sets a harmonious stage for the luminous time and power-reserve indications complemented with an outsize date, the moon-phase display, and the day/night indicator. Hours and minutes are displayed on a big subdial at 9 o’clock, the power-reserve indicator lies below the date at 3 o’clock. And A. Lange & Söhne incorporated the small seconds in the moon-phase display.

The now 20th (!) Lange calibre with a moon-phase display is based on the Lange 1 movement introduced two years ago, and it has the same performance attributes. This includes the maximum power reserve of 72 hours and the precisely jumping outsize date display. It beats with a frequency of 21,600 semi-oscillations per hour.
The 70 parts for the moon-phase display were so integrated in the L121.3 manufacture calibre that it is only marginally larger than the calibre L121.1 inside the Lange 1.

The Lange 1 Moon Phase is available in white gold with a black dial (39.500€), in pink gold with an argenté dial (35.900€) and in platinum with a rhodié dial (52.000€).
Also, A. Lange & Söhne can now be found on Instagram. Apart from news and new models the manufacturer wants to offer exclusive looks behind the scenes. 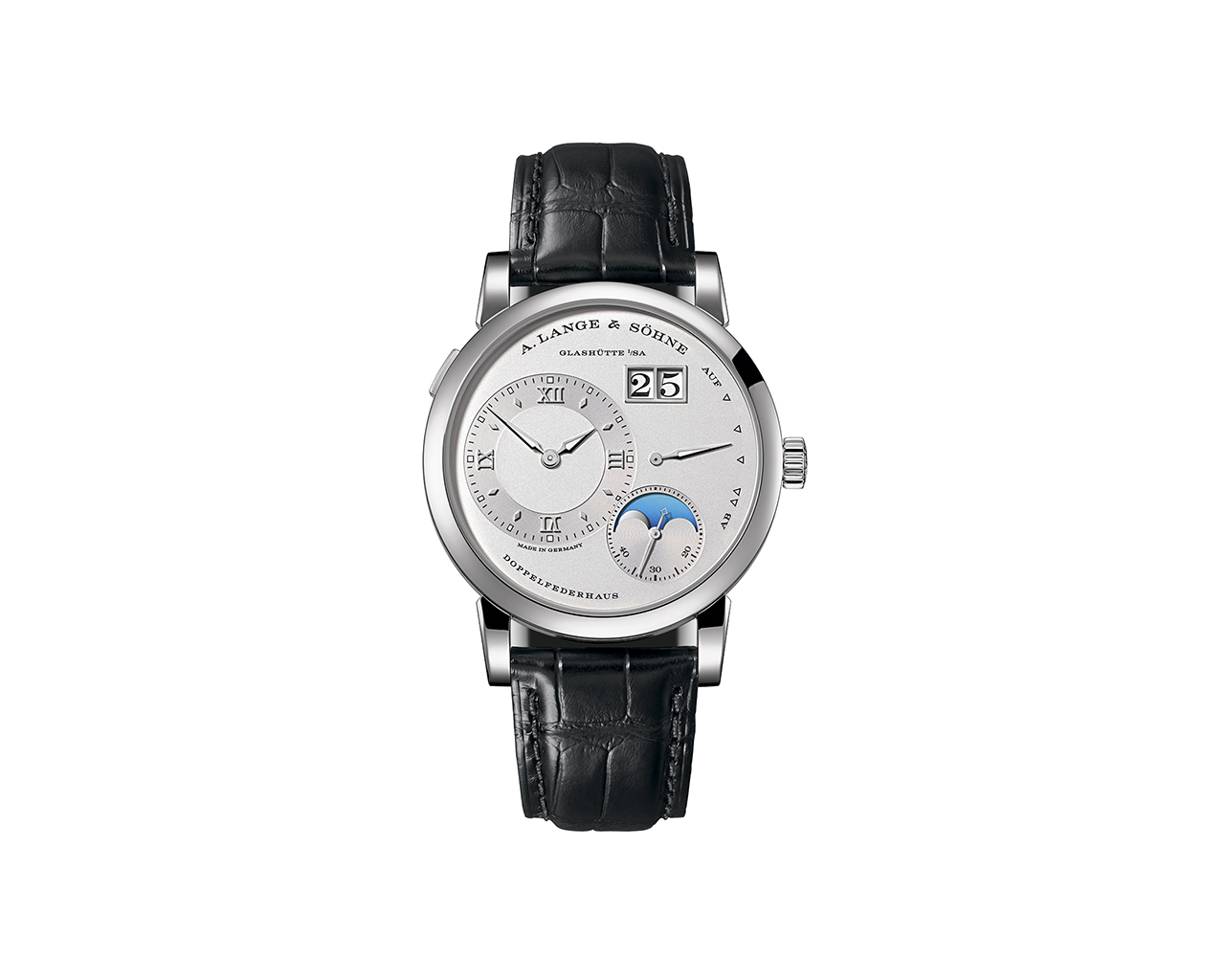 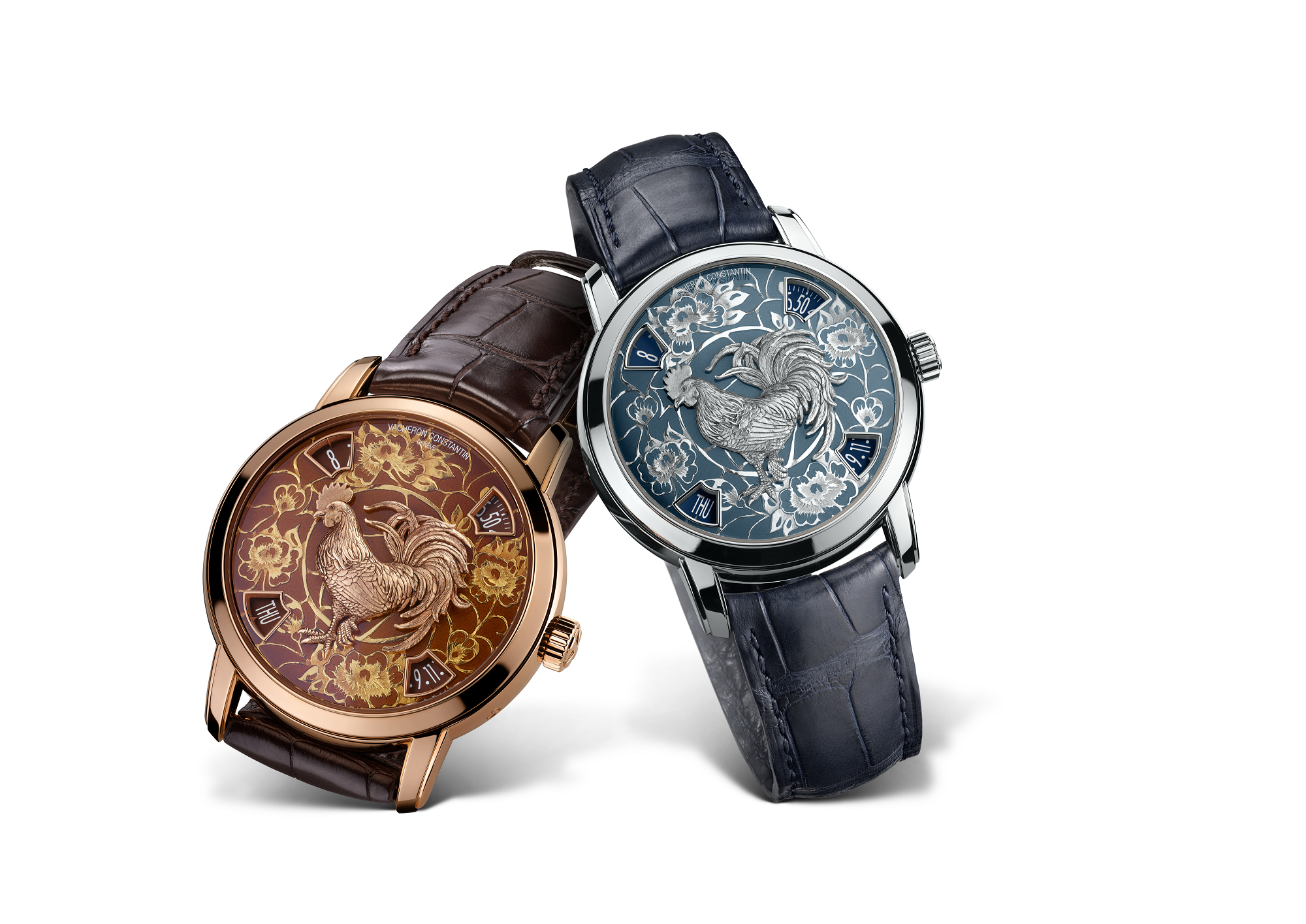 Vacheron Constantin is pursuing its dialogue with collectors and devotees of Haute Horlogerie by enriching its Métiers d’Art legend of the Chinese zodiac with the sign of the rooster. The latter will take over from that of the monkey at the Chinese New Year on January 28th 2017. Bearing the Hallmark of Geneva, these two new creations, realized in twelve models each, combine the technical excellence of the calibre 2460 G4 with the beauty of artistic crafts.
China is a nation with which the watch manufacturer has been cultivating its ties since 1845. 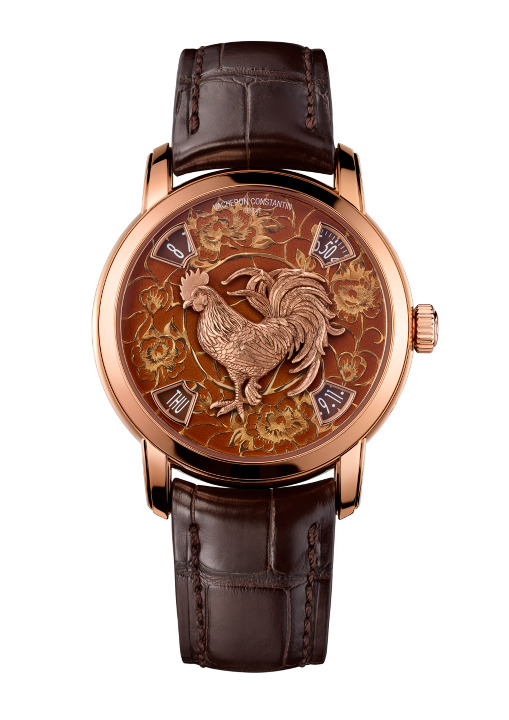 The foliage motif appearing on the dial and based on classic Chinese iconography is etched directly in the metal. The pattern remains semi-embedded and stands out from its gold bas by a subtle stage-setting of variously accentuating reliefs creating a depth effect. This makes the vegetation appear to be floating over the dial.
The enamel is applied on the surface in successive layers which enhances the intensity of the blue or bronze-toned dial. Achieving the necessary mastery of colour and of reactions to firing at temperatures between 800 and 900  degrees Celsisus calls for expertise that only can be acquired through years of experience.
The rooster, made of platinum or pink gold, is hand engraved and applied to the dial centre.

The cases are made of platinum or pink gold and measure 40 mm in diameter while being water-resistant up to 3 bar.
Inside the Métiers d’Art The Legend of the Chines zodiac – Year of the rooster works the calibre 2460 G4, a mechanical, self-winding in-house movement. It shows hours, minutes, days and dates completely hands-free but through apertures. These indications – the first two of the dragging variety and the last two of the jumping type – embody the longstanding savoir-faire of the Maison in designing and developing original displays.
Visible through the sapphire crystal back, the oscillating weight is adorned with a recurrent Maltese cross pattern. All movement components are indeed finely finished in accordance with the criteria of the Hallmark of Geneva. 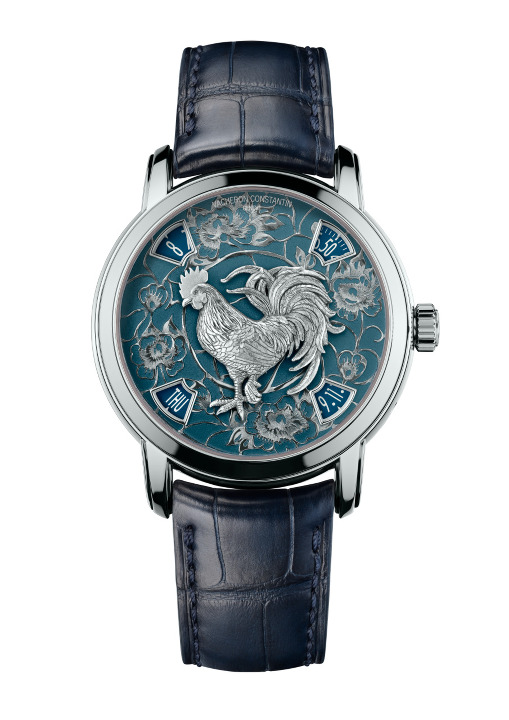 The Métiers d’Art The Legend of the Chines zodiac – Year of the rooster watches are equipped with a dark blue or brown, hand-stitched leather bracelets. Both models are limited to 12 pieces per reference.