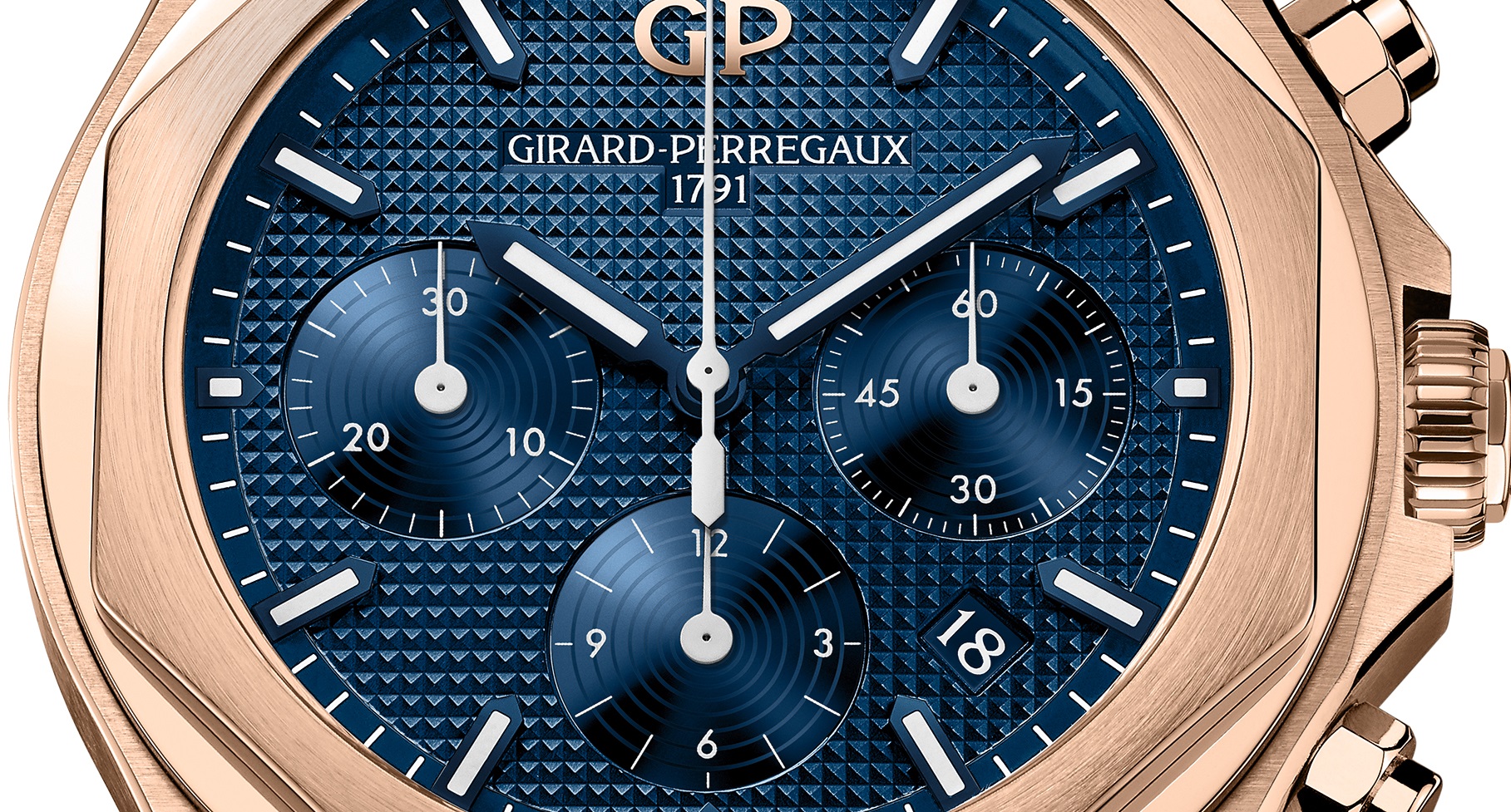 Two years after its return to the Girard-Perregaux collections, the Laureato is writing a new chapter in its history, with the introduction of an enriched range of chronographs. In this extension of an eminently sporting chic collection, the Laureato once again demonstrates the strength and relevance of the design of this iconic watch, born in 1975.
This timepiece is designed for daily use. Entirely clad in steel or pink gold, available with two different case sizes and interpreted in three dial colours, the Laureato Chronograph is a versatile watch. Equally at ease in smart or informal attire, it is capable of adapting to every daily circumstance encountered by an elegant man.

The dial, adorned as ever with the „Clou de Paris“ hobnail pattern, comes in a choice of silver-toned, black or deep-blue versions. The two counters and small seconds subdial all feature a snailed finish that ensures they stand clearly against the background. They bear simple and slender hands facilitating reading without overloading the dial.
At 6 o’clock you’ll find the small seconds, opposite, at 9 o’clock the 30-minute-counter and at 6 o’clock the 12-hour-counter. At 4.30 you’ll find a date window. 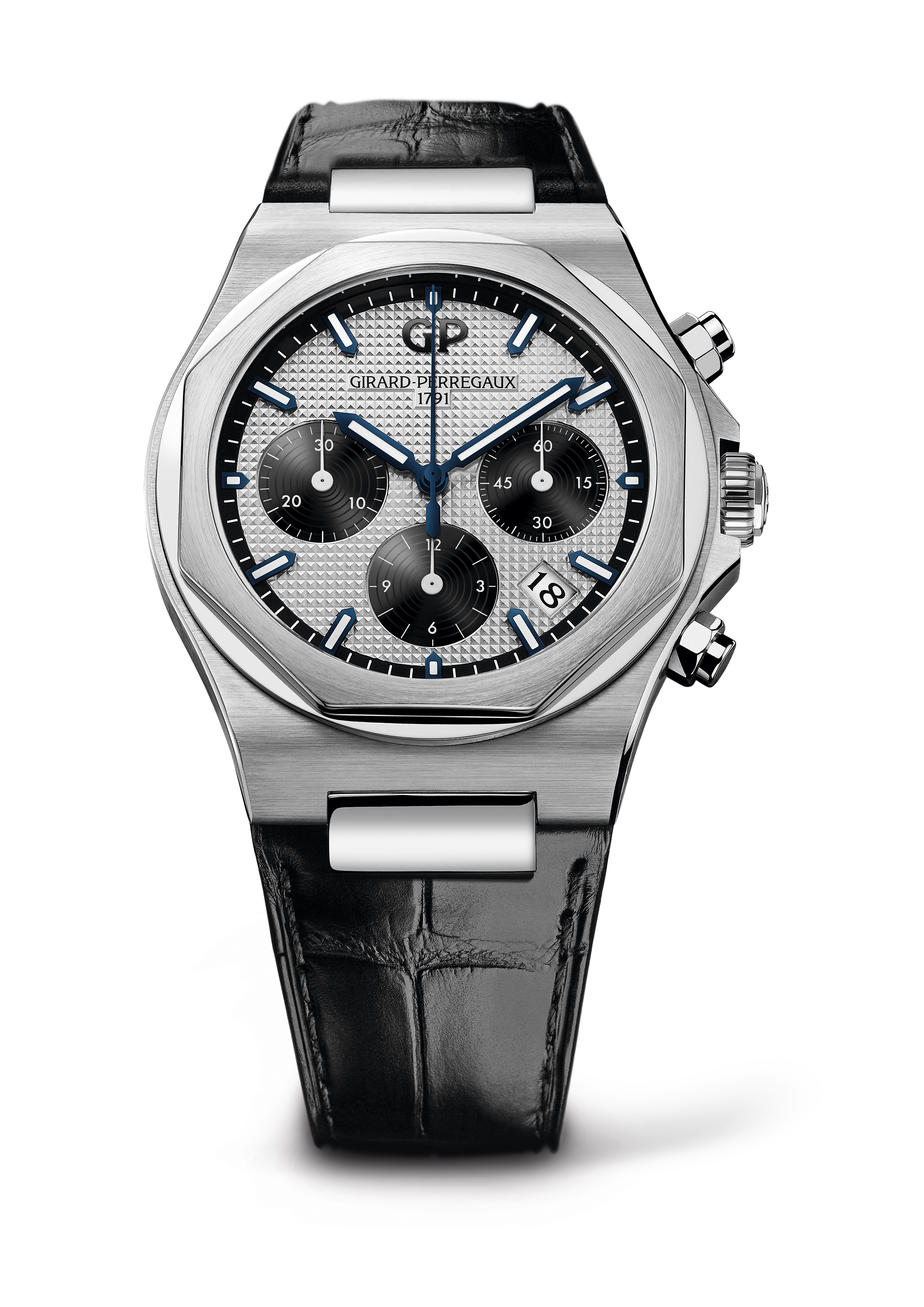 Girard-Perregaux has fitted the emblematic case with a chronograph movement. The Laureato Chronograph is endowed with the powerful identity of all Laureato models. This personality all its own is based on a genetic code that has been driving evolutions in its aesthetic details for the past 43 years, while never distorting its essence. The Laureato is defined by a polished octagonal bezel fitted on an integrated case, meaning with no lugs or loops; as well as by its metal bracelet forming a natural extension of the case and representing an original design element in its own right. The exterior of the Laureato case has evolved to incorporate a crown guard, a curve naturally imposed by the pushers themselves. The latter are octagon-shaped like the bezel, creating protuberances that the Laureato Chronograph incorporates with natural ease.
The stainless steel case is water resistant up to 10 bar, the one made of gold up to 5 bar. 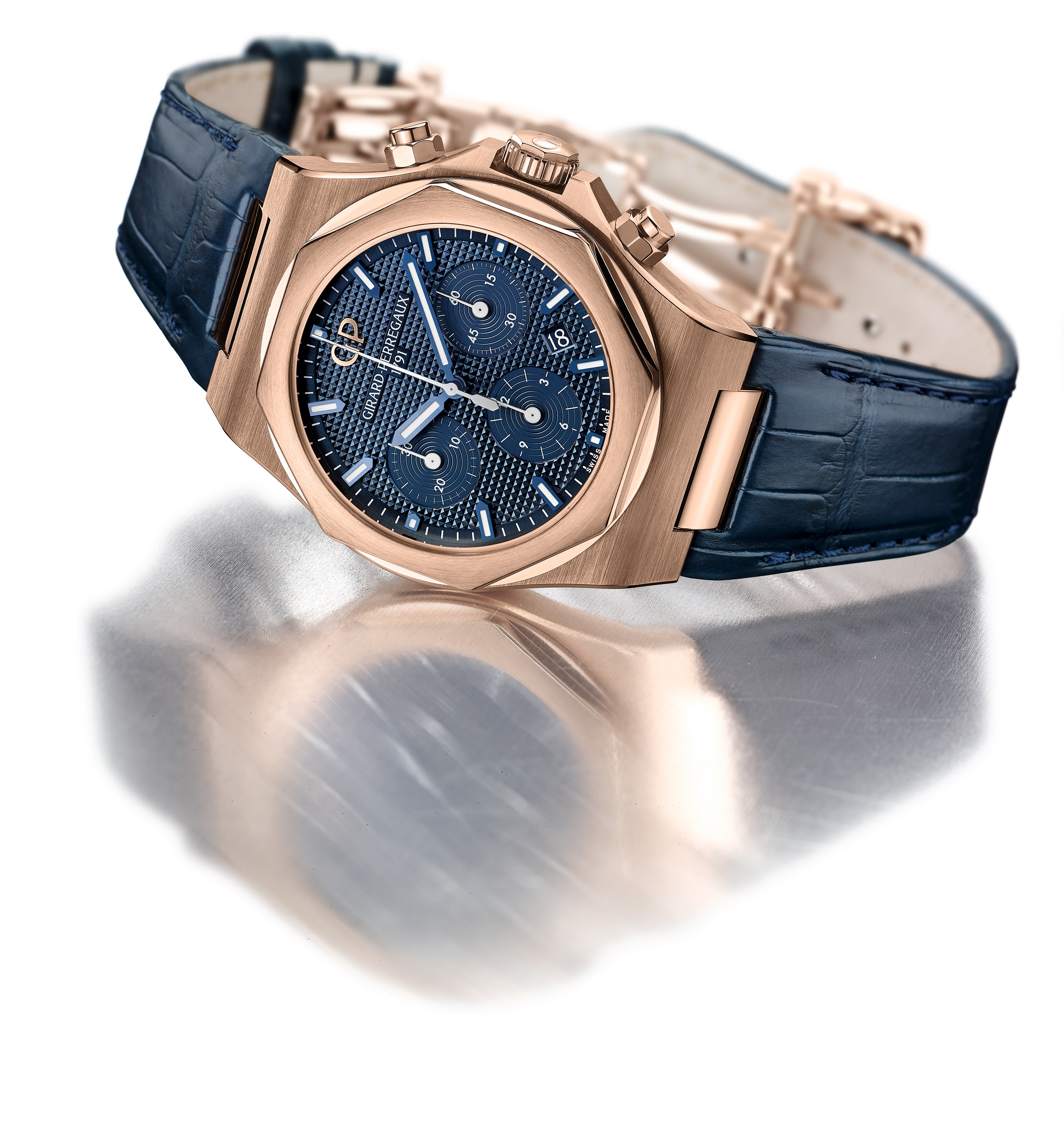 The new Laureato Chronographs are powered by the calibre GP03300-0122/0137/0138 (42 mm) respectively the GP03300-0134/0136/0137 (38 mm). the self-winding mechanical movement drives two counters, small seconds as well as a date display. As well as guaranteeing impeccably accurate timekeeping, the calibre provides a comfortable power reserve of 46 hours and works at a frequency at 4 Hz. Its horological qualities are complemented by exemplary finishing including Gôtes de Genève, chamfering and straight graining.

The metal bracelet is distinguished by wide satin-brushed H-shaped links as well as domed and polished interlink elements. The interplay of polished and satin-brushed surfaces creates heightened visual interest and enlivens the watch. The Laureato Chronograph can also be bought with a leather bracelet, in this case, Girard-Perregaux also delivers an additional rubber strap. 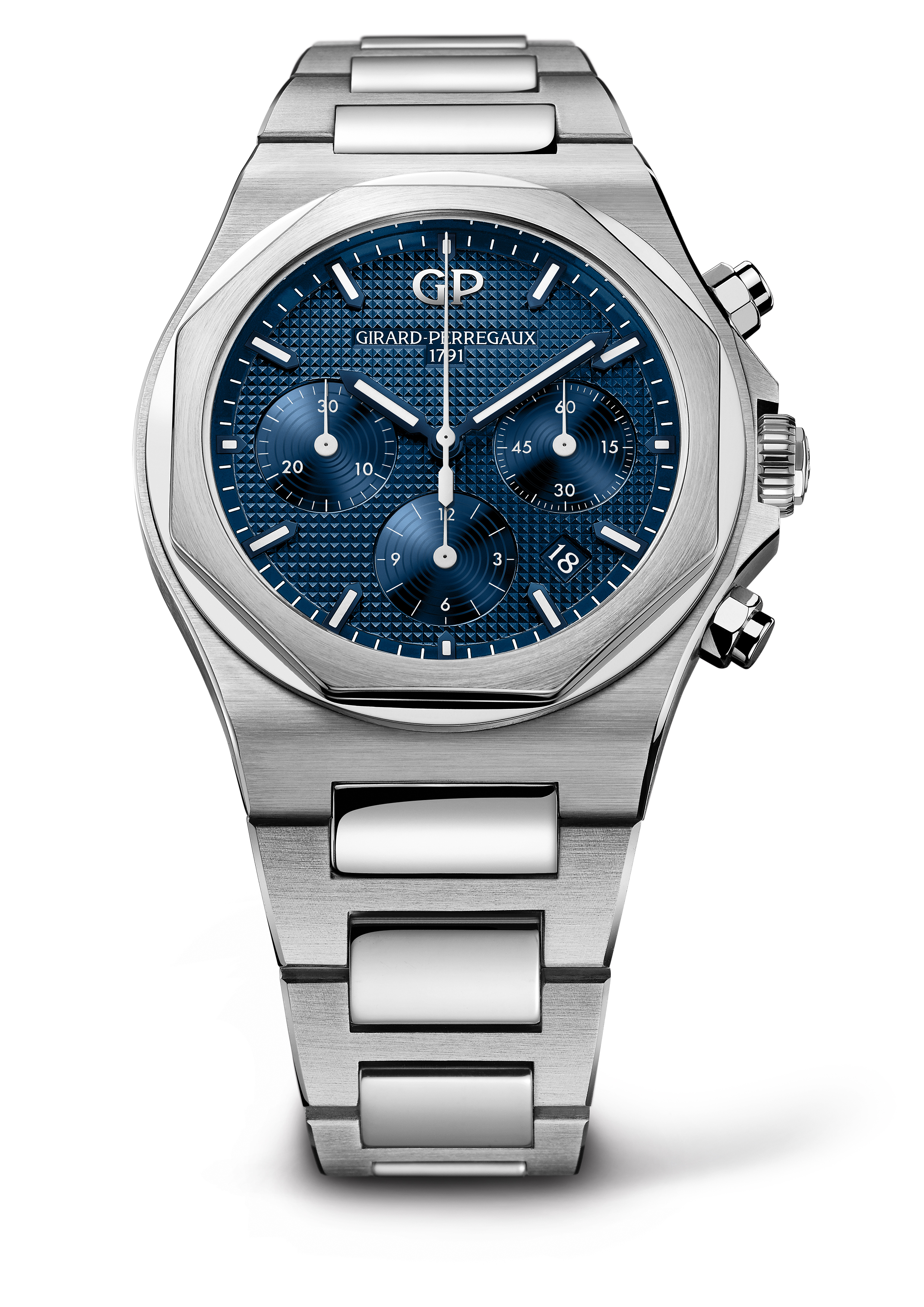 For the first time in its history, the Laureato is welcoming a new version entirely clothed in black ceramic: the Laureato 42 mm Ceramic. Thus attired, the iconic Girard-Perregaux casual chic watch takes a walk on the dark side, but only to further enhance its charisma and its strong presence.
Like fans already know, the Laureato has a personality all its own. Its genetic code drives evolutions in various details of its appearance, while never distorting its essence. 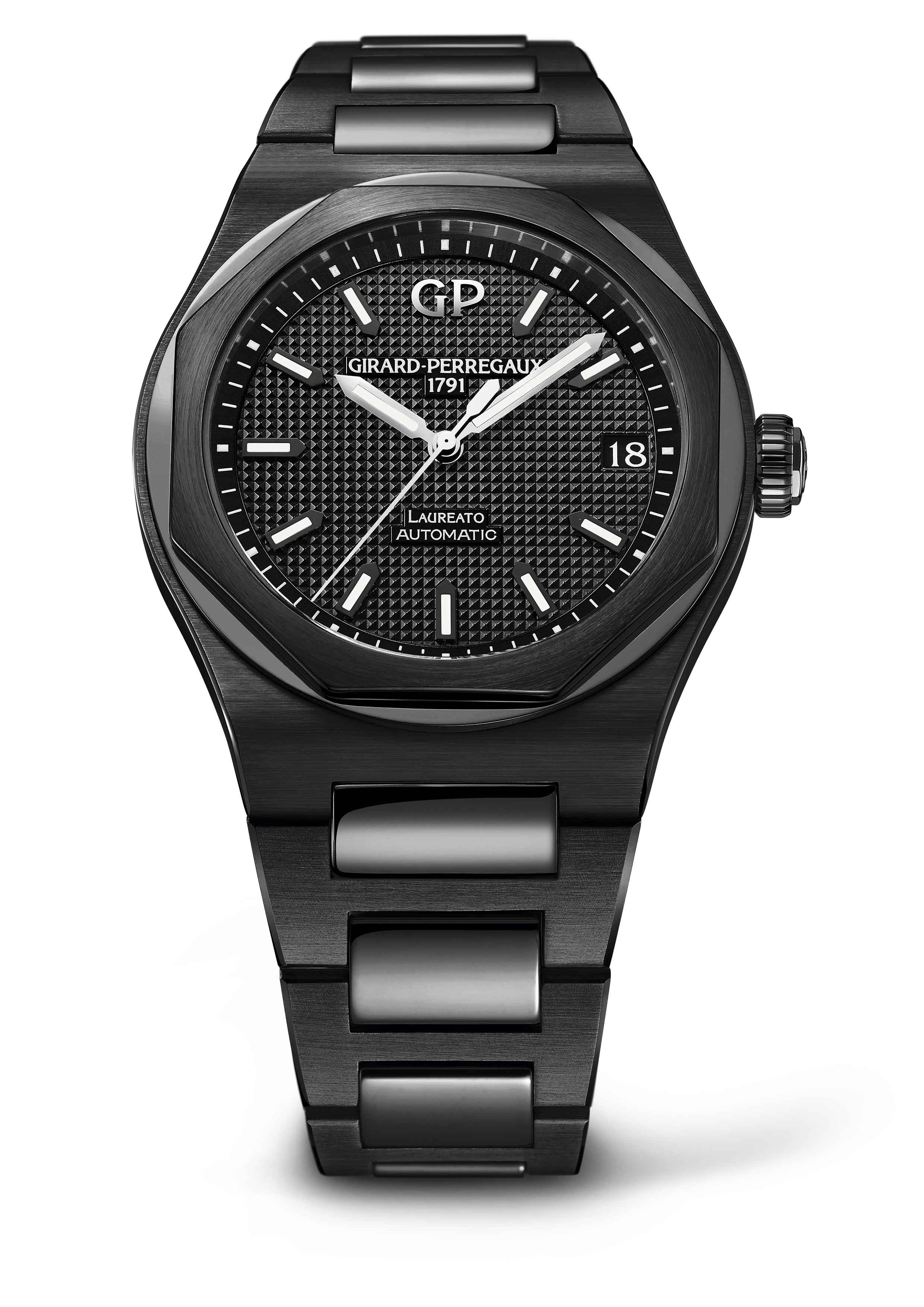 The Laureato is defined by a polished octagonal bezel fitted on an integrated case, meaning with no lugs or loops. The use of ceramic further enhances its ergonomic qualities. This high-tech material is at once light, scratch-resistant and extremely well tolerated by the skin.
As horological icon, the Laureato continues playing with contemporary codes. This architectural watch adopts this new material like a natural extension of its nature. It absorbs the structural and ergonomic benefits of ceramic and applies them to the service of wearer comfort. Black in watches is an absolute fashion color and manufacturers like to chose it for more robust models and it suits the Laureato as if it were born that way. The interplay of polished and satin-brushed surfaces creates fascinating depth effects and enlivens the watch even when such a deep shade of black.
The case is water-resistant up to 100 metres. 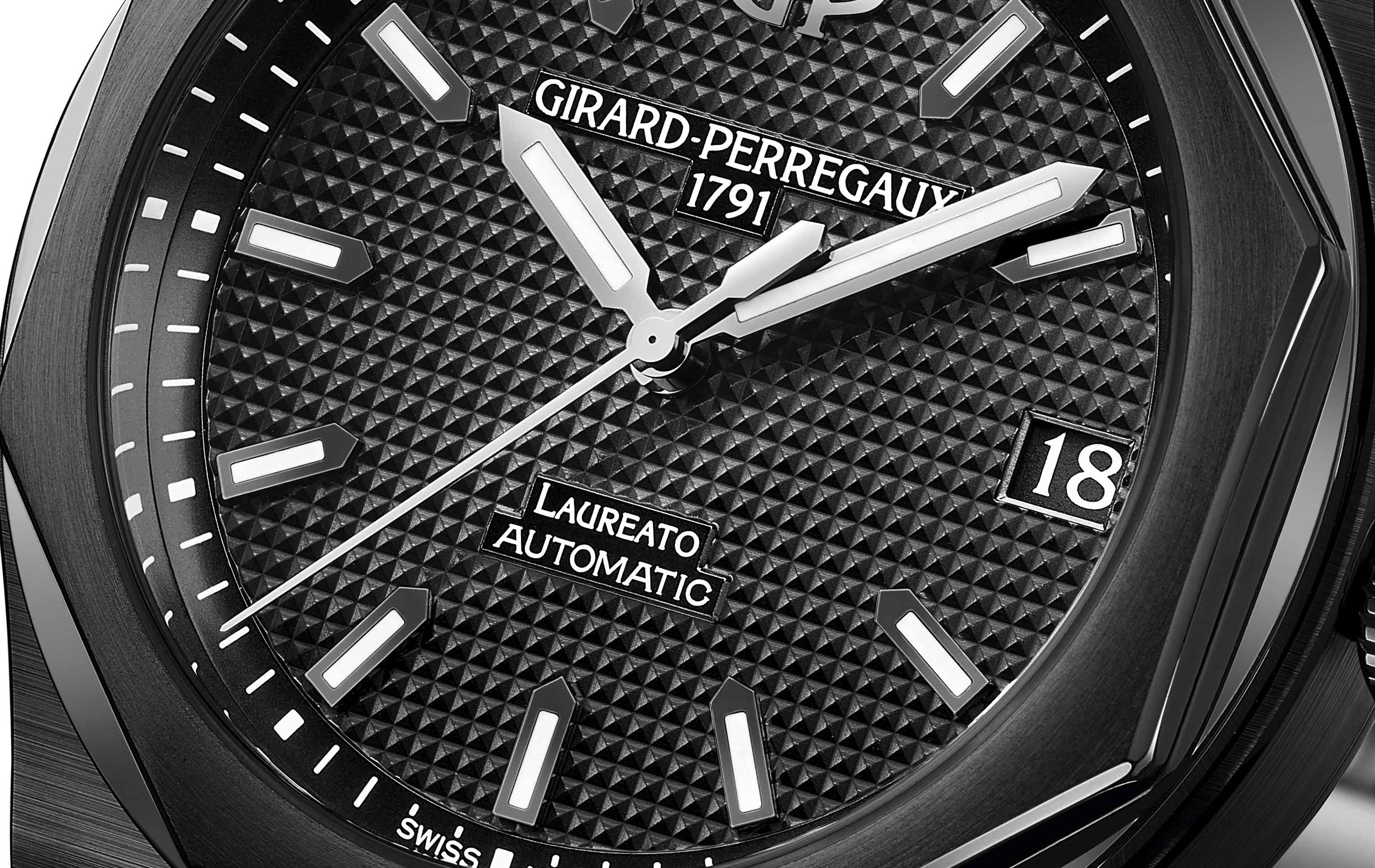 The also black dial of the Laureato deeply impresses with a stunning Clou de Paris-hobnail motif which adds a three-dimensional structure. Hands and indices are enhanced with luminescent material and the date on its black disc is also white, adding up to an ideal legibility. The dial is protected by a sapphire crystal.
The Girard-Perregaux is powered by an automatic movement, the GP01800-0025. This calibre works at a frequency of 4 Hz and provides a power-reserve of approximately 54 hours.

In donning a ceramic mantle in the darkest shade of all, the Laureato displays the strength and relevance of its design – leger, elegant and classic. And the quality Girard-Perregaux delivers is always beyond doubt. So what’s not to like?