Swiss watch manufacturer Mathieu Legrand is known for its extraordinary range of models and designs, which suit every taste. And today we introduce a crowd favourite from the current collection, a model with clear references to diving watches, but without actually being one. For those who are looking for a watch that doesn’t only look the part but is really up to the challenge, Mathieu Legrand offers the Immergée, which is designed as a serious tool and comes with a water resistance of 20 atm.

The Mathieu Legrand Marin features a classic, sporty and petty masculine design. The indexes are round except for the ones at 6, 9 and 12 o’clock, which are bar-shaped. The date window at 3 o’clock balances the design beautifully. Like the hour, minute and seconds hands, the indices are also equipped with a generous amount of lume, making the watch easily legible, even in the dark. The dial sports various structural details and is protected by a scratch-resistant sapphire crystal.

The stainless steel case features a combination of polished and satin finishes for an appealing look. The classic, slightly curved lugs are pleasantly short, so that the Marin can be comfortably worn also on smaller wrists. The case has a diameter of 42 mm and is waterproof up to 10 atm. As mentioned earlier, the Marin is not a diver’s watch; however with 10 atm, nothing stands in the way of swimming or snorkeling.
Mathieu Legrand has equipped the Marin with a beautifully serrated bezel. It is black in every version but in the blue one; in the latter it matches the dial.

The Mathieu Legrand Marin is powered by a reliable, hard working quartz movement.
The manufacturer has fitted the watches with soft, low-maintenance silicone bracelets. And the large selection of models (we especially love the blue one, but the bright orange one also has a lot of charme) should guarantee a favorite for everyone.

Since the first chronographs were introduced, they became hugely popular and with good reason. Some feature a tachymeter scale with which lap times can be calculated, some show chronograph hours and minutes, some only minutes. All of them feature subdials and a small second. Apart from these functions, chronographs are also popular because of there sporty looks – but many of them can also be worn to the office without difficulty – they are just gloriously versatile.
We are introducing five of them today. 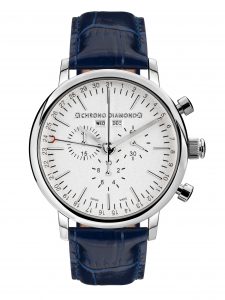 Two chronographs of Chrono Diamond made the cut. The first one is the Argos, named after the hero of the same name and fellow of Jason from the argonaut myth of Apollonios of Rhodos. And the watch ought to accompany its owner just as reliably. Its design is reduced and simply elegant. It shows hours, minutes, the running seconds at 9 o’clock, the chronograph minutes at 3 and the chronograph hours at 6 o’clock. The Argos shows day and month in two windows at 12 o’clock; the date is shown by a fourth central hand with a small crescent moon tip.
The Argos is powered by a quartz movement and you’ll have the choice between twelve different models: in stainless steel, with gold and pink gold PVD-coating and different coloured dials. All variations come with a leather bracelet. 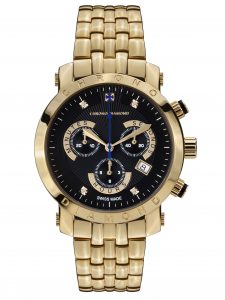 The Chrono Diamond Nestor stands out with a dial that accentuates the functions of the subdials extravagantly. At 2.30 o’clock you’ll find the running seconds, at 6 o’clock the chronograph hours and at 10.30 the chronograph minutes. At 4 o’clock a small date window is placed. The dial is textured and of course, it bears the for Chrono Diamond characteristic diamonds.
Chrono Diamond offers nine different versions of the Nestor; with dark and fair dials, in stainless steel and with gold PVD-coating, with a metal bracelet or leather strap. All of them are powered by a reliable quartz movement. All-Chrono Diamond watches are Swiss Made. 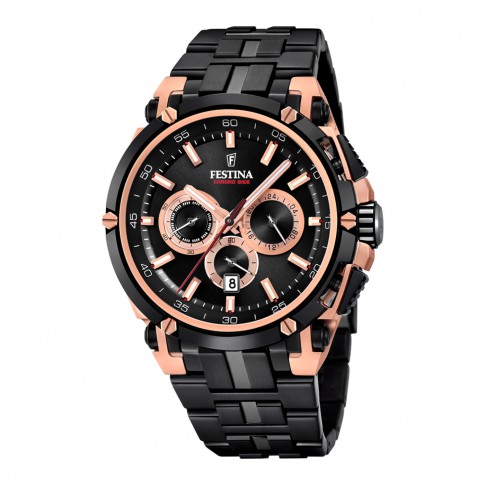 The Festina Chrono Bike-Line has a longstanding tradition and is a hommage to bicycle racing. So it is no surprise that the watch manufacturer could win Richard Virenque as ambassador. The french road racing cyclist was a climber, winning the King of the Mountains competition of the Tour de France a record of seven times. During his active time he was part of the Festina Team and the partnership between them remains to this day.
The Chrono Bike chronographs come in a variety of designs. The latest model features a stainless steel 44-mm-case, the dial is protected by mineral glass. The subdials for the running seconds, chronograph minutes and chronograph hours contrast sharply with the rest of the dial.

The Longines Conquest V.H.P. comes in many different colours and designs; some in stainless steel and some in black PVD-coating. The sober case is complemented by an articulate dial. Except for the big Arabic 12, Longines opted for plain indices which are equipped with the same greenish lume as the minute and hour hands. Red accents highlight the chronograph functions – the central seconds hand, the hands of the chronograph minutes at 3 o’clock and the chronograph hours at 9 o’clock. The subdial at 6 o’clock shows the running seconds.
The Conquest V.H.P. is powered by an reliable, high-quality ETA quartz movement. 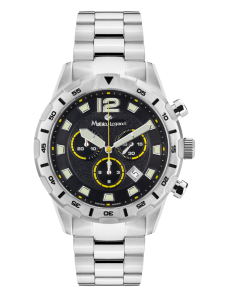 The last chronograph we’re introducing in this feature is the rugged Mathieu Legrand Avant-Garde. This model is for fans of larger, more masculine watches. The indices, the big Arabic 12, as well as the hour and minute hands are generously coated with lume, so perfect readability is given at all times, even in the dark. The chronograph seconds and the subdials are highlighted with colour. At 4.30 you’ll find a big date window.
The Avant-Garde is powerd by a Swiss made quartz movement and comes in four different versions – three with a black, one with a fair dial; in stainless steel, with a PVD-coating in gold or in a bi-colour design.

Mathieu Legrand is adding some serious bling-bling to its current collection with the new Mille Étoiles. The watch manufacturer is introducing this new watch in two different versions – in gold and rosé gold – both equally cool. We’ve heard there might be a third one in the making but we couldn’t get our hands on it – or confirmation by the manufacturer for that matter- just yet.
This women’s watch is a real head-turner due to the numerous zirconia on its dial and with one of these two you are definitely going to draw attention to your wrist – and yourself. The Mille Étoiles is not for the watch lover who likes an understated look because with one of these watches a place in the spotlight is guaranteed. 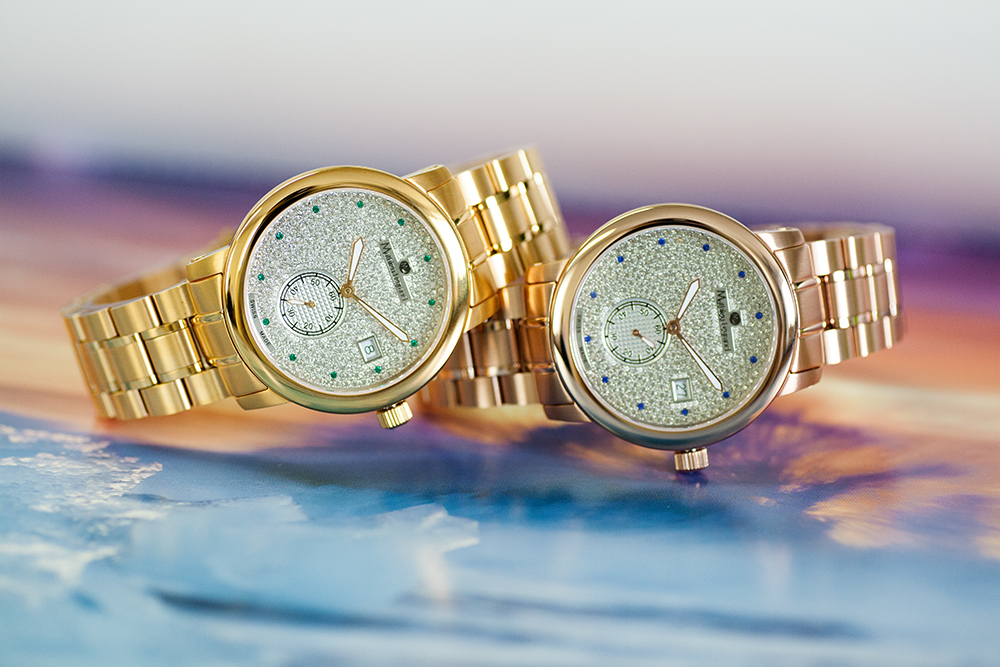 The Mathieu Legrand Mille Étoiles features a fully paved dial, a small date window at 3 o’clock and a big small seconds including a black railway minuterie at 6 o’clock. The manufacturer has decided against traditional numerals or indexes and opted for coloured zirconia. These are of a deep blue in the rose gold version and of a bright green in the gold version. The dial is protected by a scratch resistant sapphire crystal.
The bezel, the sides of the case as well as parts of the bracelet and the clasp are polished. This parts contrast nicely with the brushed parts, generating an overall charming look. The case measures 40 mm in diameter and is water resistant up to 10 atm.

The Mathieu Legrand Mille Étoiles is powered by a Swiss made quartz movement, providing great reliability combined with highest precision. It lies within a stainless steel case with PVD coating in gold or rosé gold. 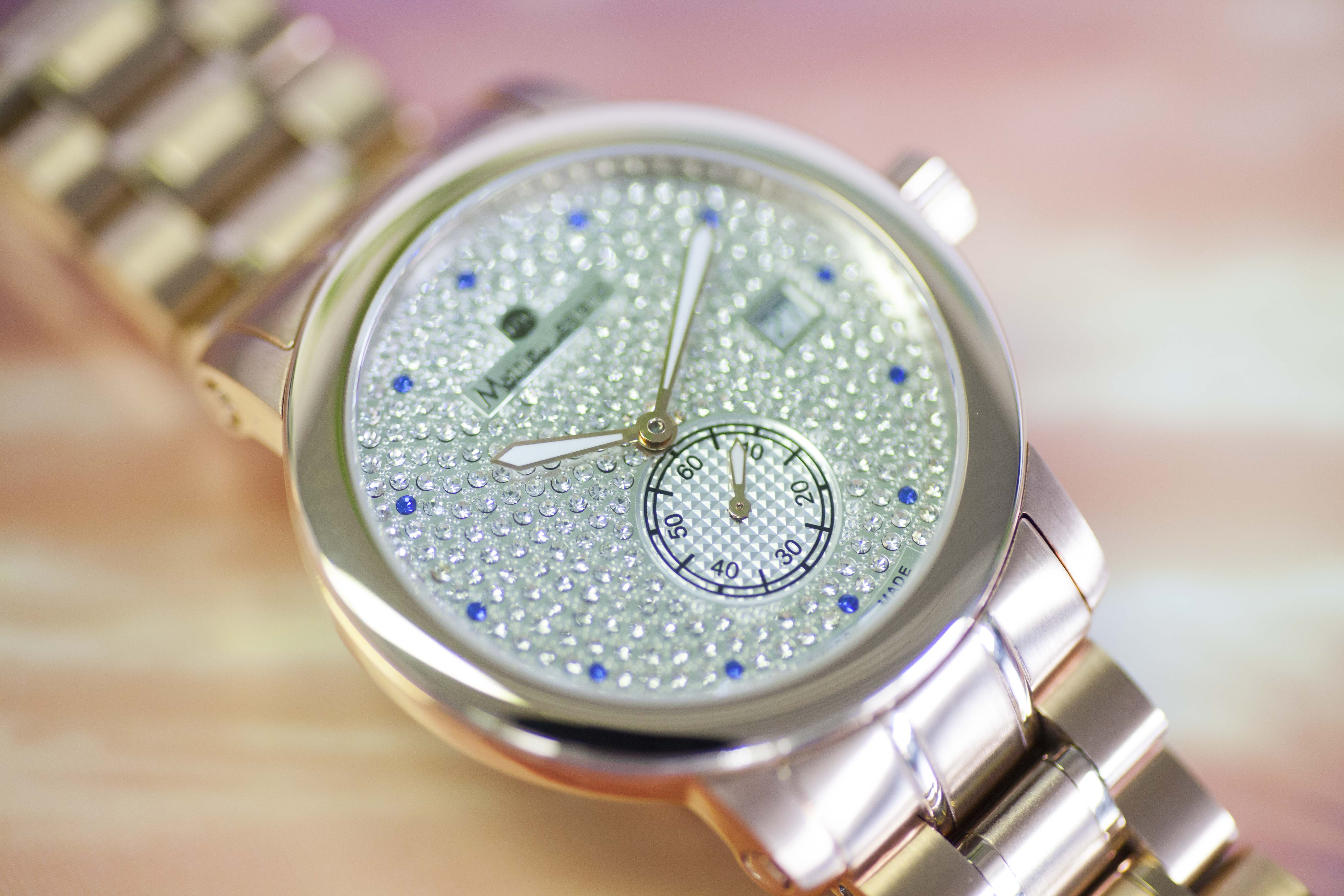 Overall, this beautifully balanced watch will make for a stunning, reliable companion. It can easily be worn every day as well as on special occasions, and with its moderate size it should fit on most wrists. We already love the Mille Étoiles and are sure, you will too.