RJ-Romain Jerome introduced a new Black edition of the emblematic Liberty-DNA timepiece. Following its initial launch in 2012, this new model pays tribute to the city that never sleeps and to the Lady of independence. 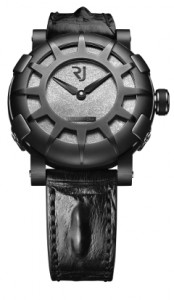 This original collection is the fruit of a collaboration between RJ-Romain Jerome, The Statue of Liberty-Ellis Island Foundation and The Gold Leaf Corporation. The result is a unique creation complete with a black PVD-coated bronze bezel, echoing the true nature of The Statue of Liberty. Loyal to Bartholdi’s original design, the vision of “Liberty Enlightening the World” shines through in each detail of the watch. Housed in a 46mm black PVD-coated steel case, the bezel of the timepiece has been designed to perfectly sit over and protect the dial, as if it was wearing Miss Liberty’s famous crown. The spikes of the crown, thought to represent our planet’s seven continents, are illustrated here as time indicators, replacing the numerals on the dial and allowing the tips of the hands to appear through the crown’s “windows”. The famous dial composed of copper from the Statue of Liberty is now available in light grey and has been oxidized to recall the statue’s famous aesthetic.

The black Liberty-DNA is limited to 125 pieces as a nod to its big sister, the original Liberty-DNA model that celebrated Miss Liberty’s 125th Anniversary in 2012.