In a 46mm case the watchmaker has recreated the original Super Mario Bros. game from 1985. Nintendo’s legendary character Mario is dressed in his recognisable red shirt and blue overalls with his famous 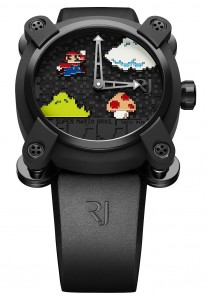 jump and iconic mushroom. These most symbolic elements of the game are eye-catchingly depicted on the dial and are all captured in the visual stye that captivaded more than one generation. And that’s hardly surprising, because Super Mario was one of the first video game characters that entered pop culture in a serious way while being „human“.

In order to accentuate the pixelation with perfect geometrical forms, the dial was built on a complex three layered plate with different finishes, either bead-blasted or drawn out for both the RJ-Romain Jerome monogram and the ground setting, which offers an overall 3D effect. All appliques, representing Super Mario, along with his mushroom, a cloud and bush, were hand-painted in cold enamel with the 30th anniversary colours and then set on the dial to add even more perspecitve to the ensemble. 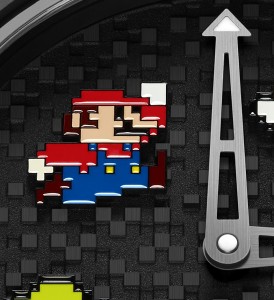 The timepiece is presented in RJ-Romain Jerome’s distinctive Moon Invader case in titanium grade 5 with a black PVD-coating. The lugs are fitted with safety screws for optimal wrist adjustment. The watch is powered by the mechanical self-winding movement RJ001-A. It provides a power reserve of 42 hours as well as central hours and minutes. Central and minute hands are all to distract the wearer from the Super Mario scene.

To echo 1985, the year the game launched, the Super Mario Bros. watch is limited to 85 pieces. It will be officially introduced at the end of 2015.