Over the past 20 years, MeisterSinger mechanical watches have revolutionised the display of time. They display the time with great precision and in an unusual way – using only one hand. In doing so, the manufacture takes inspiration from the first mechanical timepieces from the late Middle Ages. They literally point to that one fleeting moment in time, conveying a reassuring sense of time.
And to celebrate its 20th anniversary, MeisterSinger is celebrating in style – with a limited edition. We’re introducing The Astroscope: An astronomical spectacle.

The Astroscope Edition displays the weekdays in a way never seen before; in relation to the celestial bodies that have been attributed to the various days of the week since ancient times. Whereas the sun and moon divide our time into day and night and the twelve months of the year, the division into seven-day weeks does not follow an astronomical rhythm but has more of a mythological background. This method likely dates back to the Babylonians, who considered the number seven to be sacred and connected with seven celestial bodies: The Sun, the Moon, Mars, Mercury, Jupiter, Venus and Saturn. Just as most planets are named after Roman gods, most days of the week take their corresponding names from Norse mythology. Throughout history, the allocation of the days of the week to celestial bodies has endured the test of time. Accordingly, the symbols of the planets are found on the Astroscope. A bright dot indicates the current day.
The new version is equipped with a dark dial that represents the night sky. The numerals are depicted in a fine serif typeface and the astronomical symbols are designed in luminous orange. Together with the luminous hand, the time can also be easily read at night. An intimated horizon arches above the circular date window and the company logo, enhancing the impression that the viewer is looking up at the sky.

The MeisterSinger Astroscope is powered by a Swiss automatic movement, the Sellita SW 220, which provides a power reserve of 38 hours. It can be viewed through a screwed-down glass back – along with all the finishes and the continuously operating oscillating weight.
MeisterSinger has opted for a stainless steel case. It has a diameter of a slender 40 mm and is water-resistant to 5 bar.

This Astroscope is a limited edition of 100 pieces.
All models are equipped with a soft calfskin strap. Its orange colour picks up the colours of the dial and provides a continuous look.

German watch manufacturer MeisterSingers crafts mechanical watches for people who aren’t interested in counting seconds, but see the bigger picture and want so stay on track. MeisterSinger builds single-hand watches – and follows a longstanding tradition in doing so. Although the movement of the long, single hour hand is hardly noticeable to the human eye, it is as relentless as the passing of time on ancient sundials.
Our division and representation of time always followed the movement of the stars. Even back in the Middle Ages, tower clocks emulated astronomical models, preferring to recreate the mechanics of the heavens on Earth rather than wanting to show single minutes or even seconds. Now, the renowned watch designer is presenting its first astronomical watch – the Lunascope. 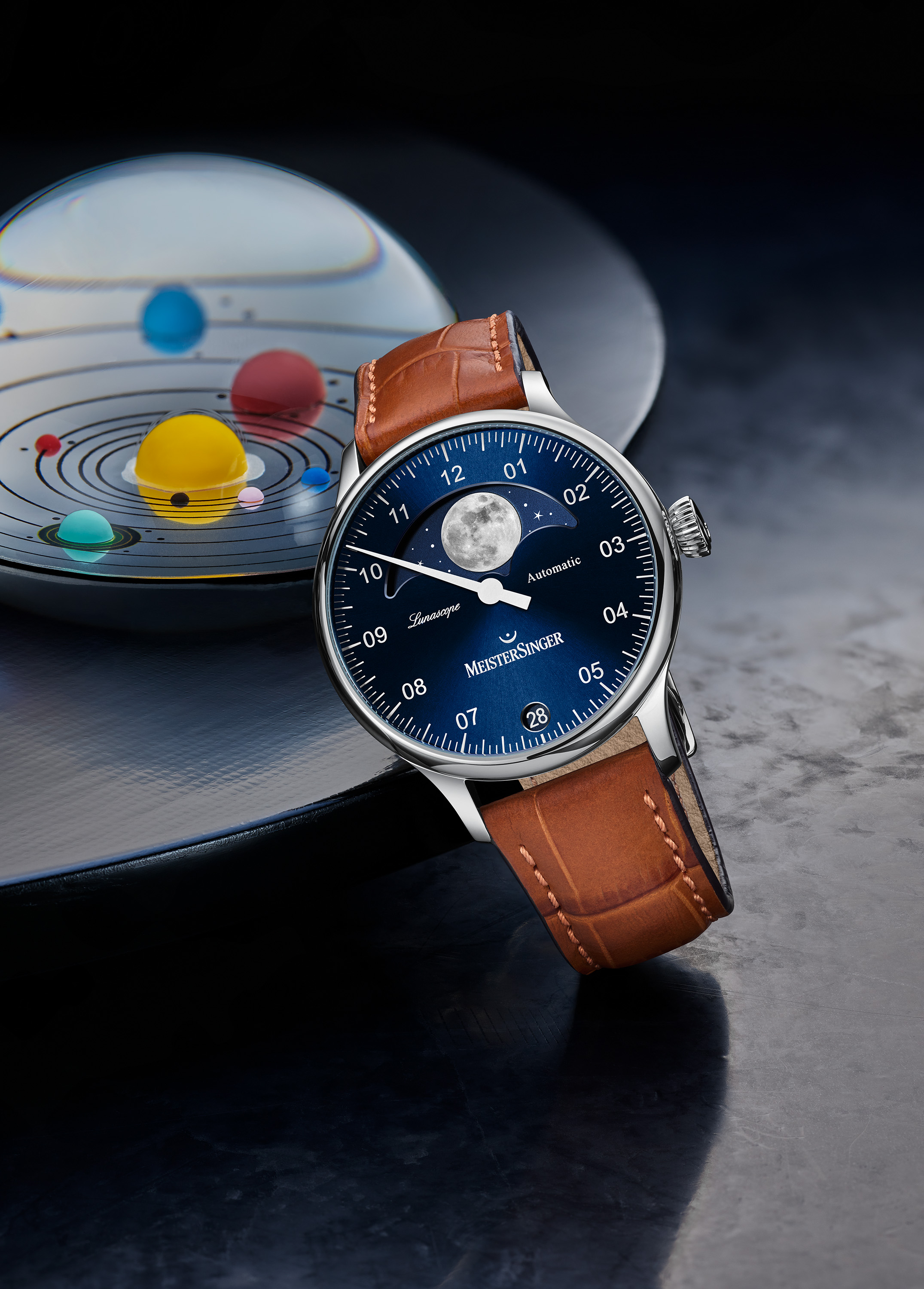 The slender 40-millimeter-stainless steel case of the Pangaea family forms the ideal backdrop for the dial with its unusually large moon-phase display. The upper half of the dial features a dynamic cut in which the moon moves across a dark blue, starry background. The generous diameter of this timepiece allows a realistic depiction of even fine details of the moon’s surface – just like when you’re looking up at the full moon on a clear night.

The natural impression of the Earth’s satellite corresponds to the astronomical precision with which the Lunascope presents the moon’s various phases. The moon takes 29 days, 12 hours, 44 minutes and 2.9 seconds to circumnavigate the Earth. A lot of watches round this figure down to 29.5 days, which means their movements deviate by eight hours per year and need to be corrected by one complete day every three years. The movement specially designed for the MeisterSinger Lunascope is far more exact. Its moon-phase indicator only needs a slight adjustment after 128 years – a short period of time in astronomical terms, but a very long time in the world of watchmaking.
Since the Lunascope comes with a glass back, the Swiss automatic movement ETA 2836 can be viewed. And it provides a power reserve of 38 hours. 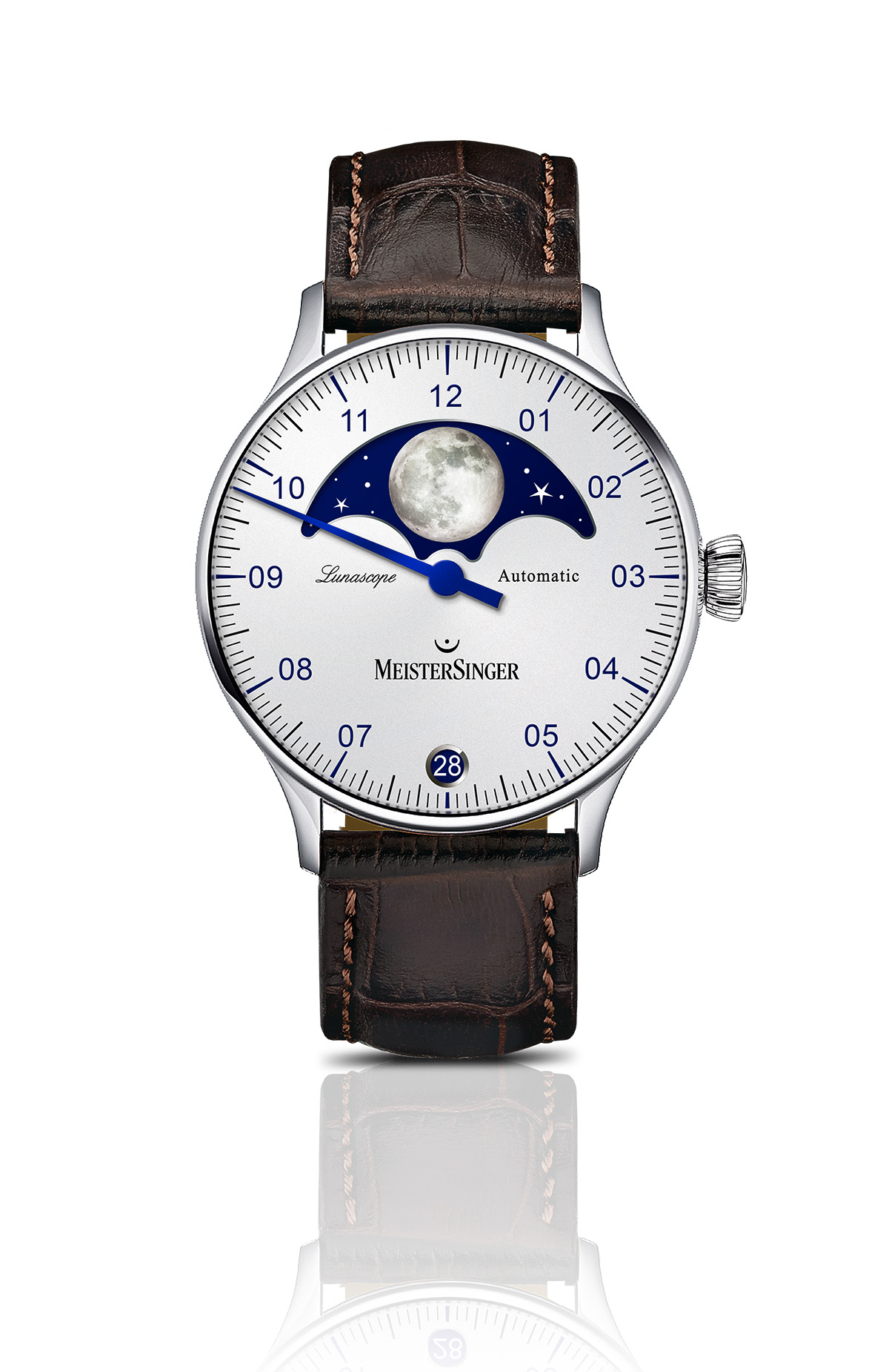 MeisterSinger offers the Lunascope in two versions: with a sunburst dial in the dark blue of the moon’s background or with a silvery opaline dial, on which the circular date window at 6 o’clock forms an optical contrast to the astronomical display. Both watches are completed by a calfskin strap.

Meistersinger specializes in manufacturing watches that feature one single hand – and only show what is really important. Mostly, a single, neele-thin hour hand rotates around the dial on which you can accurately tell the time to the nearest five minutes. However, the Salthora, which was first presented in 2014, features a minute hand instead – the hour is shown in a circular window positioned at 12 o’clock. As soon as the hand reaches the middle of the window every sixty minutes, the number denoting the next hour appears in the window like a flash.

The „jumping hour“ principle was first used in wristwatches during the 1920s. However, its perfection is quite a technical challange. The Salthora by Meistersinger should display the „jump“ exactly on the hour, show the hour in the window without wobbling or shaking, but jump to the middle of the window with immediate precision. The watch should also provide the power required for the jump without impairing the smoothness of the movement. 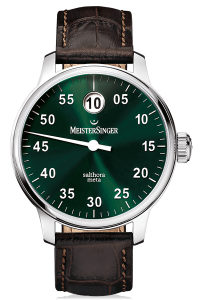 For all these reasons, Meistersinger had a module designed for the tried-and-tested ETA-2824-2 ans Sellita SW 200-1 Swiss movement, which ensures the punctual, exact jump using painstakingly balanced mechanics. The tension required for the actuating lever of the hour disk is built up by a snail attached to the minute whieel in the course of 60 minutes. Hence, power is not withdrawn suddenly from the mainspring barrel, but continually, which only influences the workings to a minimal degree.

The first Salthora is visually dedicated to the charm of watchmaking finesse. With the new Salthora Meta, however, Meistersinger has adopted a new style, paying tribute to the clear, powerful character of this 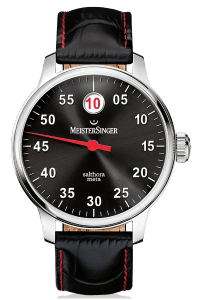 watch concept.
The Salthora Meta is 43 millimeters in diameter and has a striking, cylindrical stainless steel case. It is waterproof up to 5 atm and fitted with a six-screwed exhibition back. The digits of the minutes and of the hour display are depicted in a sans serif Helvetica typeface. The watch will be available in four versions. The models featuring a white or ivory-covered dial will be fitted with an hour disk in exactly the same colour. Here, the complication is not immediately obvious. However, the hour disk in the blue version is white, just like its hand. The black Meta with the hour digits and hand in signal red has an almost dramatic impact.