A timepiece shrouded in mystery. Its existence has eluded collectors and Zenith collaborators alike for decades, wondering whether it actually existed. As the legend goes, in 1970, shortly after Zenith debuted the groundbreaking El Primero calibre, the manufacture had produced a prototype of a manual-winding chronograph, housed in a blackened steel case. Only a handful of this prototype was made, but the model was never officially produced or marketed. Some of the watchmakers and longtime employees of Zenith had heard of the rare watch, and there were even sightings. But they were largely unconfirmed and so the watch remained a mystery.
After Zenith began celebrating the 50th anniversary of the seminarl El Primero chronograph calibre in 2019, the manufacture’s team set out ot find the prototype of the black chronograph, which hadn’t been seen since the early 1970’s. The time had finally come to complete the black watch project that had begun almost half a century earlier. The Chronomaster Revival “Shadow” does not directly reproduce a historical watch but reimagines what could have been.

The Chronomaster Revival “Shadow is heavily inspired by the obscure black chronograph prototype from 1970 and housed in a 37 mm case, a faithful reproduction of the very first watch fitted with the El Primero – the A384. But instead of the traditional choice of stainless steel with a superficial layer of black coating Zenith has opted for microblasted Titanium, bringing out the dark grey nuances of the lightweight yet highly durable metal with its completely matte finish. The case is waterproof up to 5 atm.

In spite of its dark demeanor, the Shadow remains a highly legible chronograph, with grey counters and tachymeter scale subtly contrasting against the deep, matte black dial. The hands and applied markers are filled with white Super-LumiNova that emits a bright green glow in the dark.
Hours and minutes are displayed centrally, and at 9 o’clock you’ll find the running second. The central second hand belongs to the chronograph, at 3 o’clock you’ll find the 30-minute-counter and at 6 o’clock the 12-hour-counter.

Unlike the prototype from 1970, which feature a manual-winding chronograph movement, the Chronomaster Revival “Shadow” features the most prolific automatic chronograph ever made, the El Primero 4061. It operates at a frequency of 5 Hz and provides a power reserve of at least 50 hours.
And of course, the watch is equipped with a display back, so the movement can be admired accordingly.

The Chronomaster Revival “Shadow” is delivered with a black rubber strap with a cordura-effect and a touch of white on the stitching.

Zenith embarks on the debut edition of LVMH Watch Week with a new kind of innovation in its Defy collection with the Defy Midnight, a uniquely conceived line of women’s watches with a cosmic touch. In addition, the new Elite collection redefines the codes of 21st century watchmaking for the ultimate contemporary elegance.

With its new creations dedicated entirely to women, Zenith is elevating both ends of the spectrum of women’s watches. On one side, the resolutely contemporary Defy Midnight and on the other, the timelessly elegant Elite collection.
For its first purely feminine watch, Zenith sought inspiration from the cosmos. The Defy Midnight is a versatile sporty-chic timepiece with a uniquely celestial dial. As much a jewel as it is a watch, the Defy Midnight is the perfect companion for the women of today: confident, expressive and with a style of their own.

Housed in a 36mm stainless steel case embellished with brilliant-cut diamonds, the dial of the Defy Midnight gives Zenith’s “time to reach your star” philosophy a literal, visual manifestation. Available in deep blue or grey colors, the dial features a glossy finish with a vertical gradient effect for an unprecedented depth. Portraying the night sky above the endless horizon, where the dark vastness of space gives way to the glimmer of starlight, the dial has an enchanting effect. Zenith’s faceted star emblem is the highest point in the depicted night sky. Completing the celestial landscape are stars of different sizes – some of which glow in the dark.
A third dial made of white mother-pearl with a vertical gradient effect evokes moonlight on a cloudy night. White diamonds are applied on every hour marker, except at 3 o’clock where the date window is placed.

Equipped with the automatic Elite in-house movement, the Defy Midnight provides dependable precision and autonomy of 50 hours. A star-shaped oscillating weight brings a galactic element to the case-back view.

The Defy Midnight features an assortment of bracelets and straps – the integrated stainless steel bracelet as well as a selection of colored satin and leather straps – that can easily be swapped by the wearer, allowing the watch to different looks and situations.

Since the dawn of precision timekeeping, watchmakers have sought to produce timepieces that offer unfaltering performance through the use of constant force. Zenith reinterprets the fusee and chain constant force mechanism in a modernistic style in the new Defy Fusee Tourbillon.

The Defy Fusee Tourbillon is available in two distinct editions in Carbon and Platin. The first version features a light yet robust carbon case, crown and buckle head. The carbon fibre treatment even extends to the open dial, with the central skeletal element and surrounding flange ring giving off the unique simmer of this material. The second version of the Defy Fusee Tourbillon is crafted in platinum. The exposed movement provides a vibrant, voluminous view, where the mix of materials and tones add visual depth, from the anthracite base of the movement to the blued chain and tourbillon cage topped with a set of geometrical bridges in two tones.

The spoke design of the bridges is amplified by their bicolor finish, where the top satin-finished surface is given a black treatment, while its polished sides are a lighter grey rhodium tone. The layout of the bridges offers a balance of the various functions and complications. On the top half of the movement, one can admire the uniquely conceived fusee and chain constant force mechanism. On the opposite end at 6 o’clock, a tourbillon cage with an entirely new construction featuring an off-centered balance wheel makes a full rotation every 60 seconds. Like the chain, the tourbillon cage comes in a striking blue color. Positioned at the edge of the dial between 4 and 5 o’clock, a red-tipped hand indicates the power reserve, a handy feature when manually winding the Defy Fusee Tourbillon with its 50-hour power reserve.

The Defy El Primero Fusee Tourbillon is housing the new El Primero 4805 SK calibre, a manual-winding movement that follows the Defy code of avant-garde movement architecture with an open three-dimensional impact. By combining the fusee and chain mechanism with a tourbillon regulating organ, Zenith places precision at the forefront of its unique take on haute horlogerie.

The Defy Fusee Tourbillon in carbon is limited to 50 pieces, the second version in platin will be available only 10 times.

Mr. Porter, one of the online destinations for men’s style, has announced that it has partnered with Swiss watch manufacturer Zenith and British watch customiser Bamford Watch Department in creating a new watch. Co-creating a project and product of this nature is a first for all three partners in this undertaking. Mr. Bamford and his team worked alongside Zenith in the design of the watch, which was then entirely developed and produced in-house at Zenith’s Manufacture.

Based on the Zenith Heritage 146 model, the Chronomaster El Primero Mr. Porter takes cues from several of the brand’s historical design elements. These subtle touches include the tachymeter inspired by a 1971 El Primero, a red seconds hand, aesthetic reminders of a vintage chronograph case and centric sub-dial rings hark back to the old Zenith recorder tell-tales and motion detecting clock.
Its unique dial comes in the colour “Solar Blue”, also sporting a terrific colour gradient. The Chronomaster El Primero Mr. Porter comes with a central hour and minutes hand, as with a central chronograph seconds. At 9 o’clock you’ll find the running seconds, at 3 o’clock Zenith has placed the 30-minute-counter of the chronograph. No date window disturbs the beautiful synchronicity and balance of the dial.
The most distinctive feature – and our favourite by far – are the unusual minute-markers and the internal tachymeter scale. The latter makes for a clean, sleek bezel. Above the dial arches a domed sapphire crystal with anti-reflective treatment on both sides.

The stainless steel case sports an universal diameter of 38 mm and is water-resistant up to 10 atm. The case back is transparent and engraved so the owner can observe the oscillating weight with Côtes de Genève motif.
The Chronomaster El Primero Mr. Porter is powered by the powerful calibre El Primero 4069. It works at a frequency of 5 Hz and provides a power reserve of at least 50 hours.

The Chronograph comes with a blue Alcantara strap featuring white stitching designed to complement the white dial markings.
Each of these 25 limited-edition watches will be exclusively available on Mr. Porter.

Renowned for their unique and dynamic designs, Zenith is soaring into the stratospheres of the luxury watch universe. This is a brand that exists to challenge, dare, follow and pioneer the pursuits of those who push the boundaries of possibility.
Inspired by such iconic missions as Felix Baumgartner’s Stratos sky-dive, Zenith has made its own mark on history. The El Primero calibre was the first integrated automatic chronograph movement beating at a frequency of 36,000 vibrations per hour. This is a brand that truly believes that for every goal achieved, there is another to work towards and this is what the watches reflect. 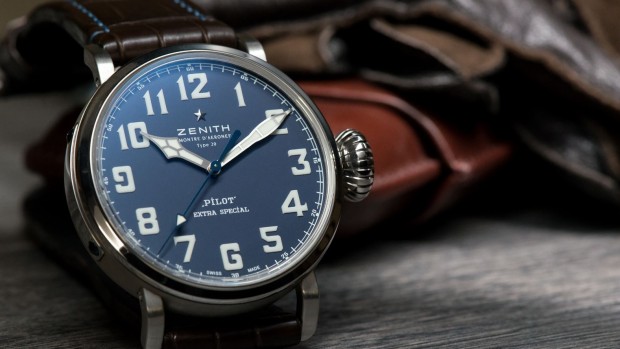 And now Zenith is marking an exciting collaboration with prestigious British luxury watch retailer, The Watch Gallery, bei the exclusive unveiling of the Zenith Pilot Extra Special, a 35-piece limited edition pilot’s watch recognised for its oversized onion crown and striking vintage Arabic numerals. Zenith, which has a relationship with aviation that goes back to the early days of heavier-than-air flight, remains the only Swiss watch brand with a licence to print the word “pilot” on a watch dial. 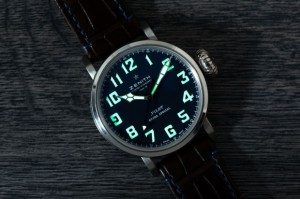 Powered by one of the brand’s suite of highly accurate in-house Elite Calibre 679 automatic movements and featuring hour, minute and central seconds hand, a minimum 50-hour power reserve as well as Arabic numerals shaped entirely from Super-LumiNova, the 45mm Zenith Pilot Extra Special with stainless steel case and crown offers a number of exclusive bespoke features in The Watch Gallery’s signature blue. These include a blue dial, blue stitching on the brown alligator leather strap and engraving on the case-back – thus clearly identifying the link to The Watch Gallery and the limited edition number.

Wearing the Zenith El Primero Stratos, Felix Baumgartner jumped out of a capsule suspended from a balloon in the stratosphere at an altitude of more than 39 km last summer.

The chronograph Baumgartner was wearing is actually available for anyone to buy. The stainless steel case displays Baumgartner’s motto, “Learn to love what you have been taught to fear.” The dial is protected by a nostalgically domed version of the second-hardest substance known to man: sapphire crystal. The automatic movement powers a flyback chronograph, which means that timing intervals can be reset without having to first start and stop—a necessary function when the short amount of time at one’s disposal under duress can mean the difference between life and death.

The fact that one of Zenith’s timepieces was the first to break the sound barrier in a near space environment with Felix Baumgartner once again proves the brands reliability under extreme conditions. 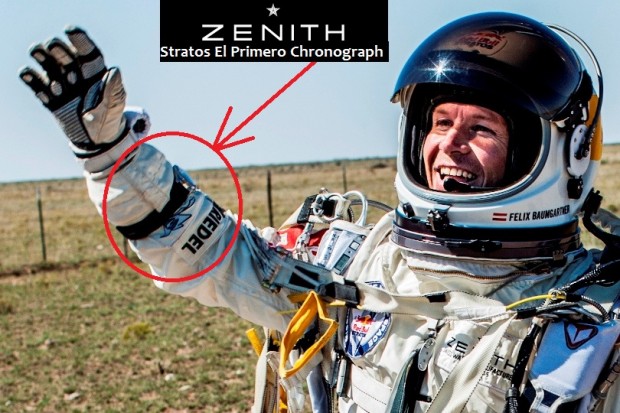 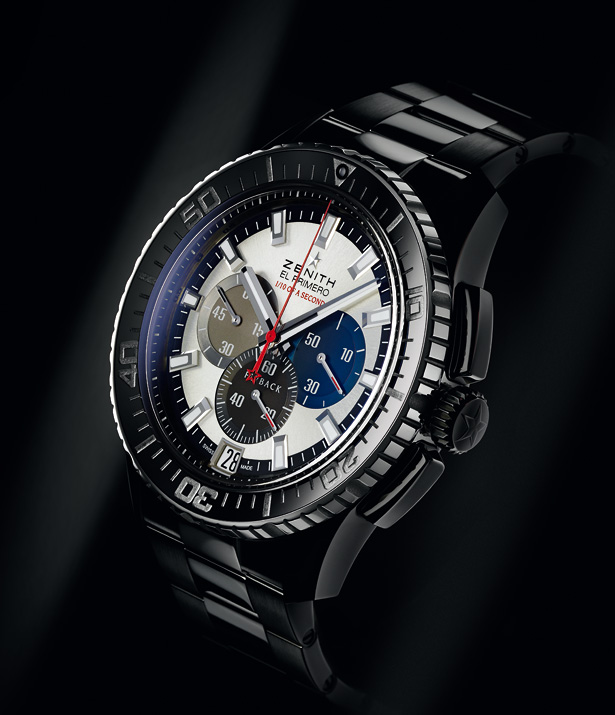