It’s been two years since RJ has introduced its last Spider-Man watch. That’s why we were pretty euphoric when we heard about the latest collaboration with Marvel – all the more when it became clear that not just one, but two Spider-Man models came out of this association: The ARRAW Spider-Man and the ARRAW Spider-Man Tourbillon.

The RJ ARRAW Spider-Man is an openworked watch that features many references to the comic book hero on its dial. Below that works the skeleton movement, which comes in the form of a spider’s web. The small second, which lies between 8 and 9 o’clock, sits in it in the form of a bright red spider.
The automatic movement operates at a frequency of 4 Hz and offers a power reserve of at least 48 hours. RJ built all of this in a robust black carbon case that comes with a water-resistance of 10 atm.
The RJ ARRAW Spider-Man is a limited edition of 100 pieces.

The ARRAW Spider-Man Tourbillon is the first complication that RJ developed and manufactured in-house. The tourbillon construction is entirely co-axial, with a peripheral display of the hours and minutes. This central tourbillon was developed by RJ not only because the manufacturer wanted an in-home complication, but primarily to increase the power reserve to 150 hours (or 6 days).
In order to maintain perfect symmetry, the RJ decided to design the case without a crown. The winding process is done by lifting a hoop found on the case of the back, then turning it like a key. To set the time, a concealed push button at 6 o’clock must be pressed. In order to provide maximum insight into the openworked movement, RJ opted for a sapphire crystal case back.
The case has a diameter of 45 mm, is water-resistant up to 10 atm and is made of black carbon or, in a second version, a red glass fibre composite and carbon. And it is equipped with RJ bumpers in rubber.
The RJ ARRAW Spider-Man is limited to 99 pieces.

RJ offers only 10 models of every version of the ARRAW Spider-Man Tourbillon.

So, today it begins, the World Cup championship in Russia. A lot of watch manufacturers have presented special editions for this event (or interchangeable bracelets in team colours. We will introduce the Limited Edition by JS Watch Co. Reykjavik, the COLLECTION WOЯLD CUP MMXVIII. Because it’s awesome and dedicated to everyone’s favourite underdog from the last UEFA Euro Cup: Icelands men’s national football team.
With a population of around 330,000, Iceland is by far the smallest nation ever to qualify for the World Cup championship – and it’s the first time, the team managed to do so. If that’s not a reason to celebrate with a special edition, we don’t know what is.

In this edition, JS Watch Co. Reykjavik has incorporated the colours of the Icelandic flag to honor the team. You’ll also find a lot of small details in the watch which reflect the spirit that has built up around the National team.
In the dial design you will find small details like “Fyrir Ísland” (which translates into “For Iceland”). The numbers 1 – 11 are in silver for the players on the pitch, the number 12 is in red and represents the fans, who are called “Tólfan” (“The Twelve”); due to their undying support the fans are considered to be the twelfth player in the team. The minutes in blue from 0 to 45 representing the Game Time and the 45 to 60 minutes in red saying Half Time. This idea originally came from a game time clock that was located on the National stadium “Laugardalsvöllur”. Since for battle a weapon is needed, JS Watch Co. Reykjavik designed the blue seconds hand in the shape of a viking spear.
The COLLECTION WOЯLD CUP MMXVIII logo sports a reversed R as a special memorandum for Russia, the nation hosting this years FIFA World Cup – and also to honor its special alphabet. 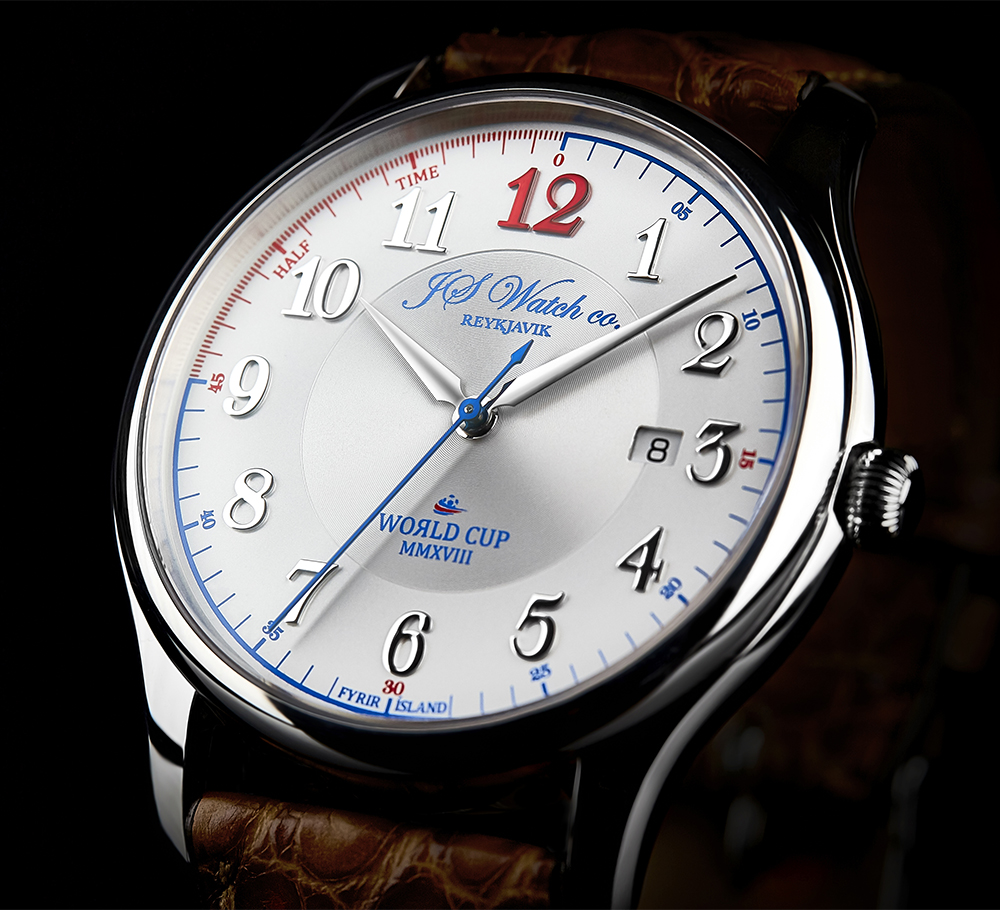 The back of the watch is engraved with JS Watch Co. Reykjavik,  COLLECTION WOЯLD CUP MMXVIII and VAR ÞAÐ EKKI – the celebration chant the team whispers in the locker room after victories. A small engraved soccer ball on the crown filled with ceramic blue colour completes the design. 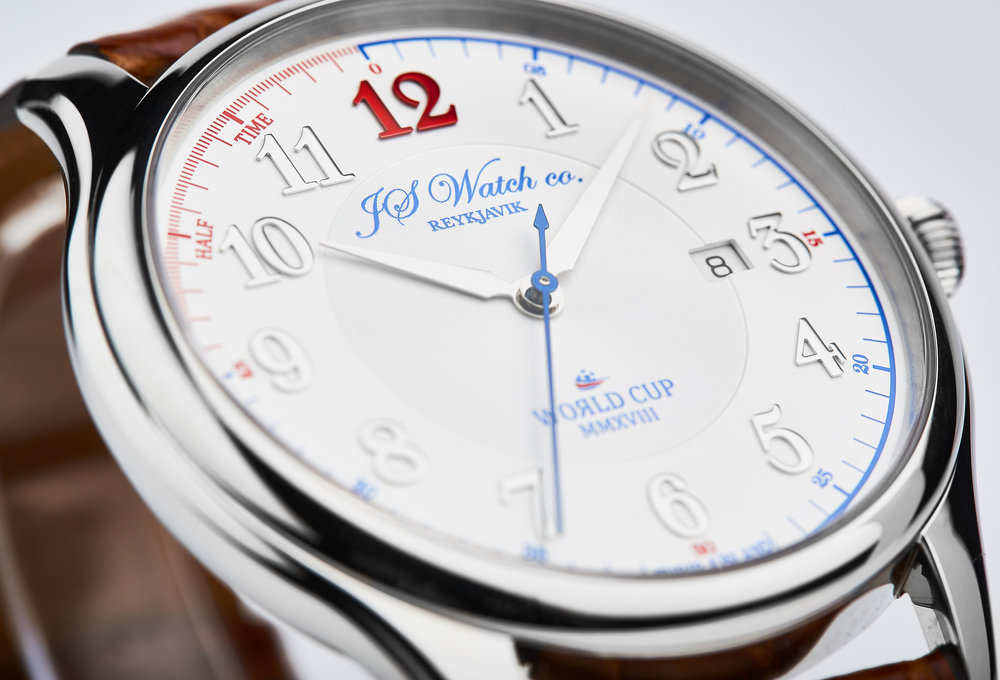 The watch comes in a 43.3 mm steel case with a curved anti-reflective sapphire crystal and see-through sapphire crystal back. The case is water-resistant up to 5 atm. Inside works a Swiss made automatic movement which assures a 38-hour power reserve when fully wound.
The watches are completed by a leather strap – calf, ostrich or alligator.

JS Watch Co. Reykjavik has limited the COLLECTION WOЯLD CUP MMXVIII to 300 pieces and the first 30 numbers are reserved for the National team members. 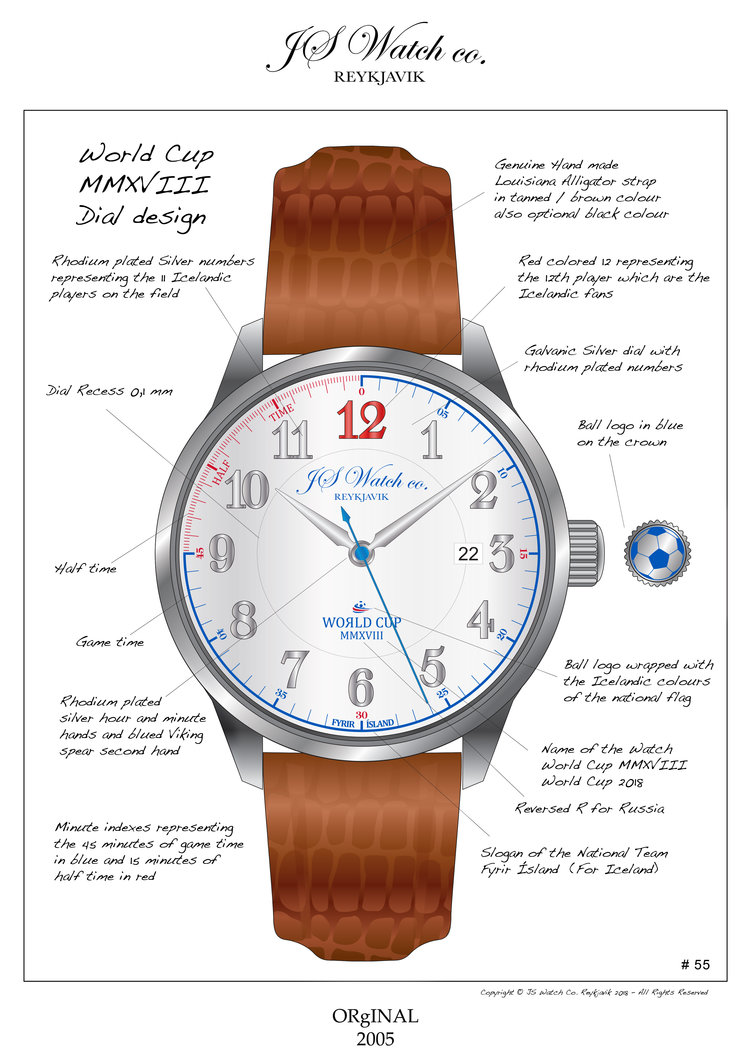 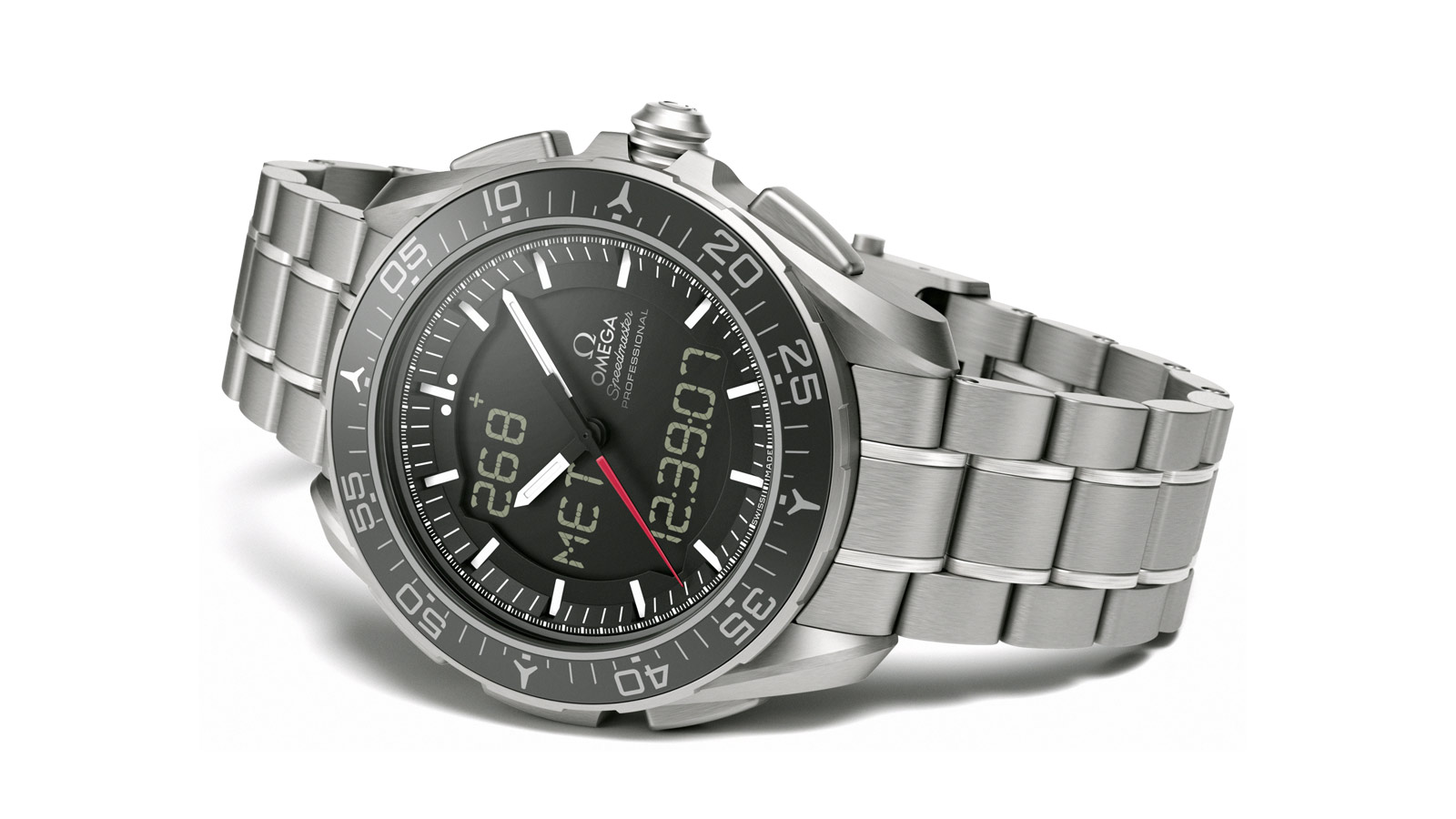 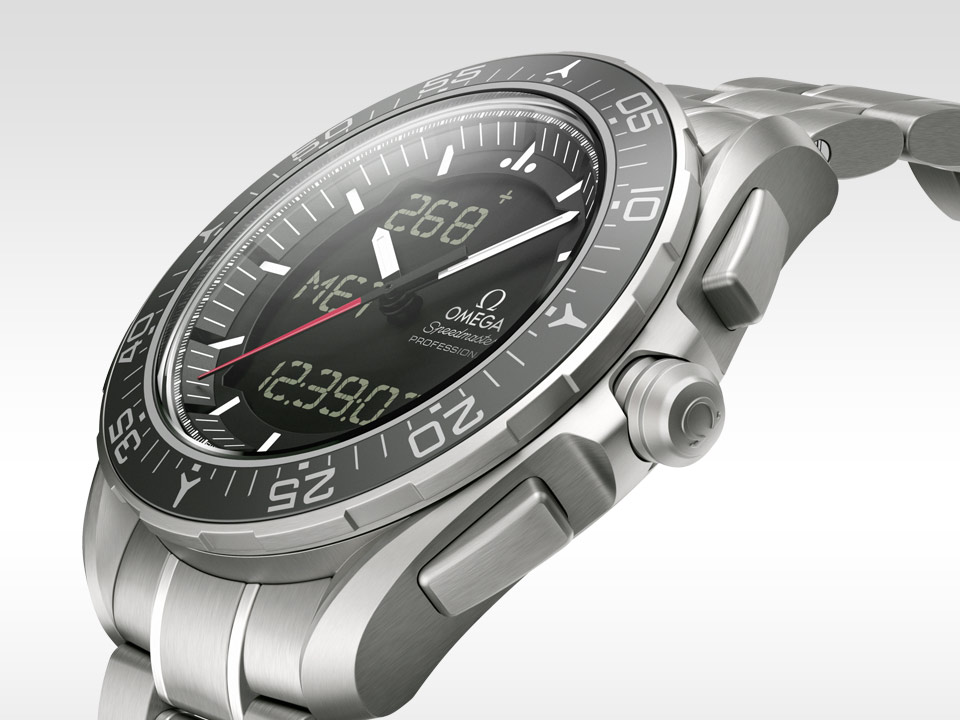 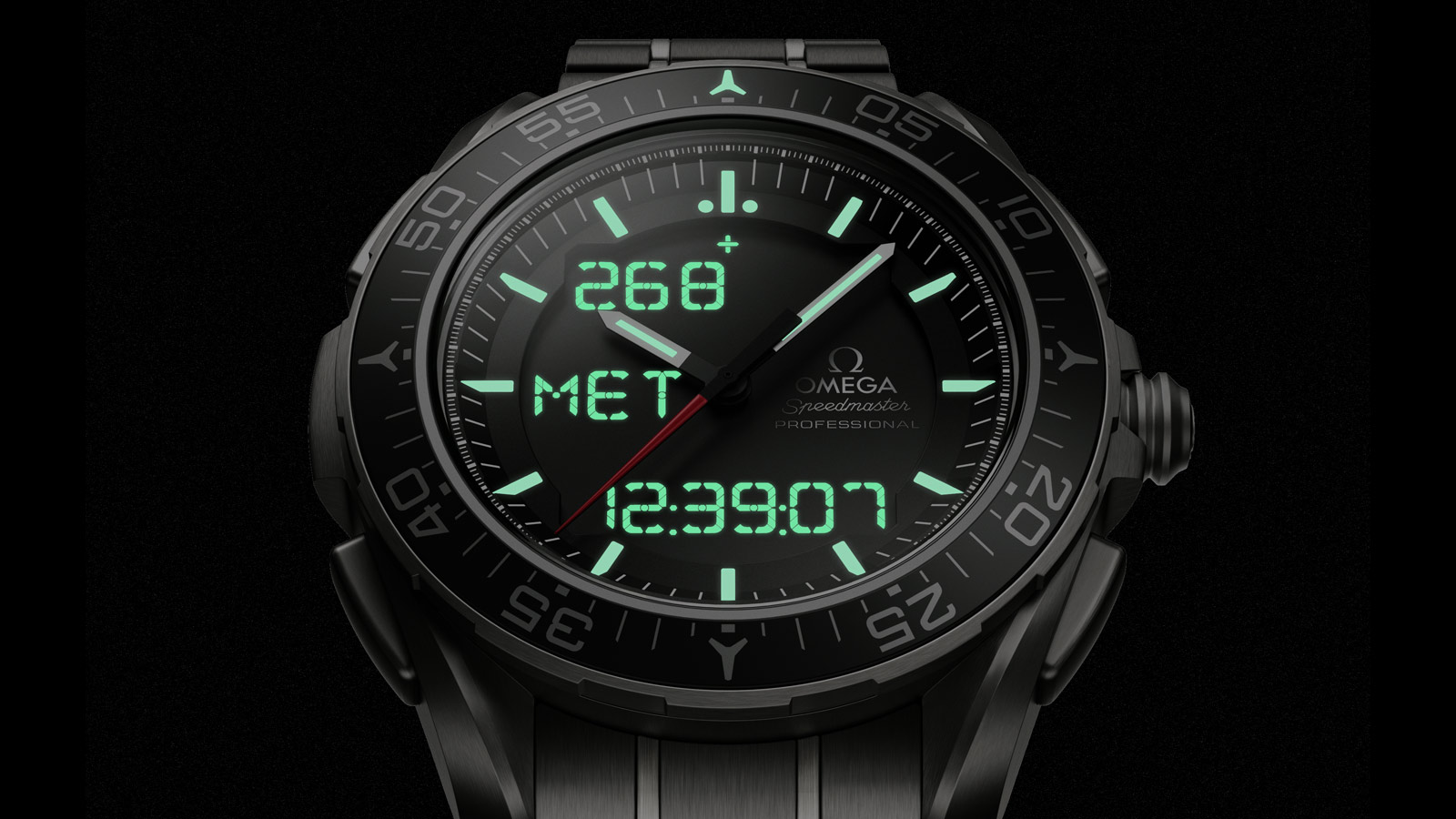 Graham has introduced a new piece, a no-nonsense tourbillon with classic good looks. The Geo.Graham incorporates the visible tourbillon at 6 o’clock, complemented by a classically styled dial. There are Arabic numerals outside a railway chapter ring marking the seconds, and Roman numerals on the inside marking the hours. The blued houre and minute hands stand in contrast to the white dial. The pink-gold case is 40 mm in diameter. 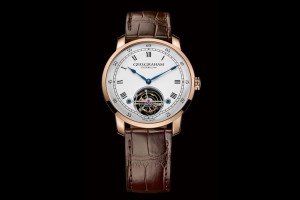 Inside the Geo.Graham Tourbillon beats a Swiss-made movement, the caliber G1796. The movement features a micro-rotor for automatic winding and a double-bridge construction of the 60-second tourbillon. The whole movement is under 10 mm thin and can be seen through the sapphire crystal back.

Now we’re waiting for Baselworld in march 2015 for a longer, more detailed look and more information on that georgeous watch. It is limited to 100 units.