In honor of the most prestigious yacht show in the world, Ulysse Nardin presented a new creation limited to 100 pieces with a Grand Feu enamel dial. It is part of the Marine Torpedo range, which reflects the brand’s maritime and military heritage and its mastery of this time-honoured craft.
This year’s Monaco Yacht Show once again welcomed lovers of magnificent yachts, dream destinations and luxury cruises to Port Hercule. An idyllic setting in which Ulysse Nardin, the main sponsor of the show, presented its latest creation: the Marine Torpillieur Monaco Yacht Show Limited Edition.
Since its very beginnings, Ulysse Nardin has focused its attention on the nautical world, and this partnership is fully in line with the manufacturer’s maritime heritage.

The new Marine Torpilleur Monaco Yacht Show Limited Edition reflects the full savoir-faire of Ulysse Nardin. The watches feature a Grand feu enamel dial. Ulysse Nardin benefits from the unique skills of Donzé Cadrans, who specialise in producing traditional enamel dials. Enamelling on the dial is a historical decoration technique for which there is no official training and which requires a great deal of sensitivity. The term “Grand Feu Enamel” refers to the vitrification of mineral materials. All of this work is carried out by hand and it is not unheard of for the dial to break during the various stages of production, which makes these creations all the more sought after.
For the Monaco Torpedo Marine, a copper base is first dusted with enamel in white and grey and then fired in an oven. In a second step, the indices and inscriptions are applied to the dial, which is then fired again, until the new enamel layer melts with the ensemble.

The dial is fitted a diameter to the case, then the openings of the two added subdials are fit to size. The chamfering and the two subdials is adjusted using a file in order to assemble the parts. The grey dials of the power reserve and the small second are then soldered to the white dial.
The hours are indicated by elongated blue Roman numerals and pear-shaped hands in stainless steel. At six o’clock, on the small seconds subdial, lie the date aperture and the inscriptions “Monaco Yacht Show” and “09.19” in red. The numbers 25, 26, 27 and 28 in red refer to the date of the yacht show.

The Torpedo Marine is perfectly adapted to the modern and urban lifestyle and convinces by its wearing comfort as well as by its aesthetics. The screw-down crown bears the engraved Ulysse Nardin logo.
The timepiece features a blue alligator leather strap with white reinforcement.

Ulysse Nardin has added a new version to its Classic Dual Time collection. As with many of its timepieces, this Classic Dual Time Enamel watch unites three fundamentals of Ulysse Nardin: technical avant-garde with the unse of Silicium in the movement, in-house manufacturing and excellent craftsmanship with its eggshell Grand Feu enamel dial. 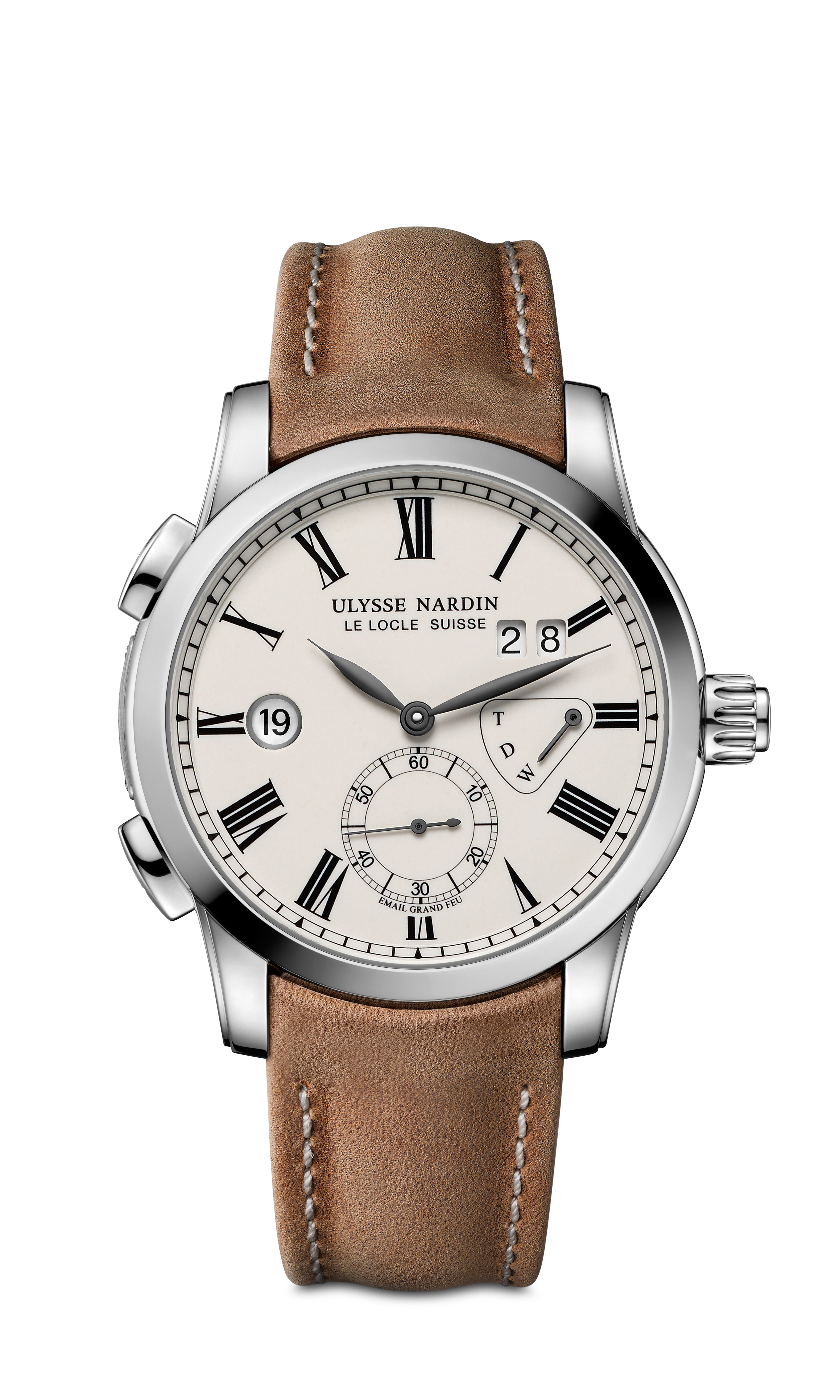 Grand Feu designates an enameling technique that goes back to the 17th century, and that is practiced today only by a handful of craftsmen, including those at Ulysse Nardin specialists Donzé Cadrans. its delicate beauty has an eternal quality. On the dial, oversized roman numerals and black hands set off the double date display at 2 o’clock, and the oversized small seconds at 6 o’clock.
Equipped with the patented Dual Time zone feature, this timepiece is instantly adjustable both forwards and backwards with a mere push of a button. These buttons feature at the 8 and 10 o’clock positions. When pressed, the pushers adjust the hour hand to a different time zone while the home indicator at 9 o’clock continues its 24-hour cycle. An impressive mechanical complication that is very easy to use. The time and date setting is another example of the watchmaker’s perpetual quest for innovation in action. The selector is integrated in the crown allowing to change settings without pulling and pushing the crown.

Inside the watch works a self-winding calibre, the UN-324. This in-house movement, entirely designed and produced by Ulysse Nardin, provides a 48-hour power reserve. It lies in a stainless steel case which sports a diameter of 42 mm and is water resistant to 30 metres. It is held on the wrist by a leather strap.

An enviable fusion of form and function, and a tribute to exquisite craftsmanship, the Classic Dual Time Enamel is a limited edition of 99 timepieces available exclusively at Ulysse Nardin boutiques.

Ulysse Nardin combines classical beauty with pure functionality in its Classic Sonata. With this watch, mechanical complications are designed with the wearer in mind, the goal being a perfection fusion of form and function. 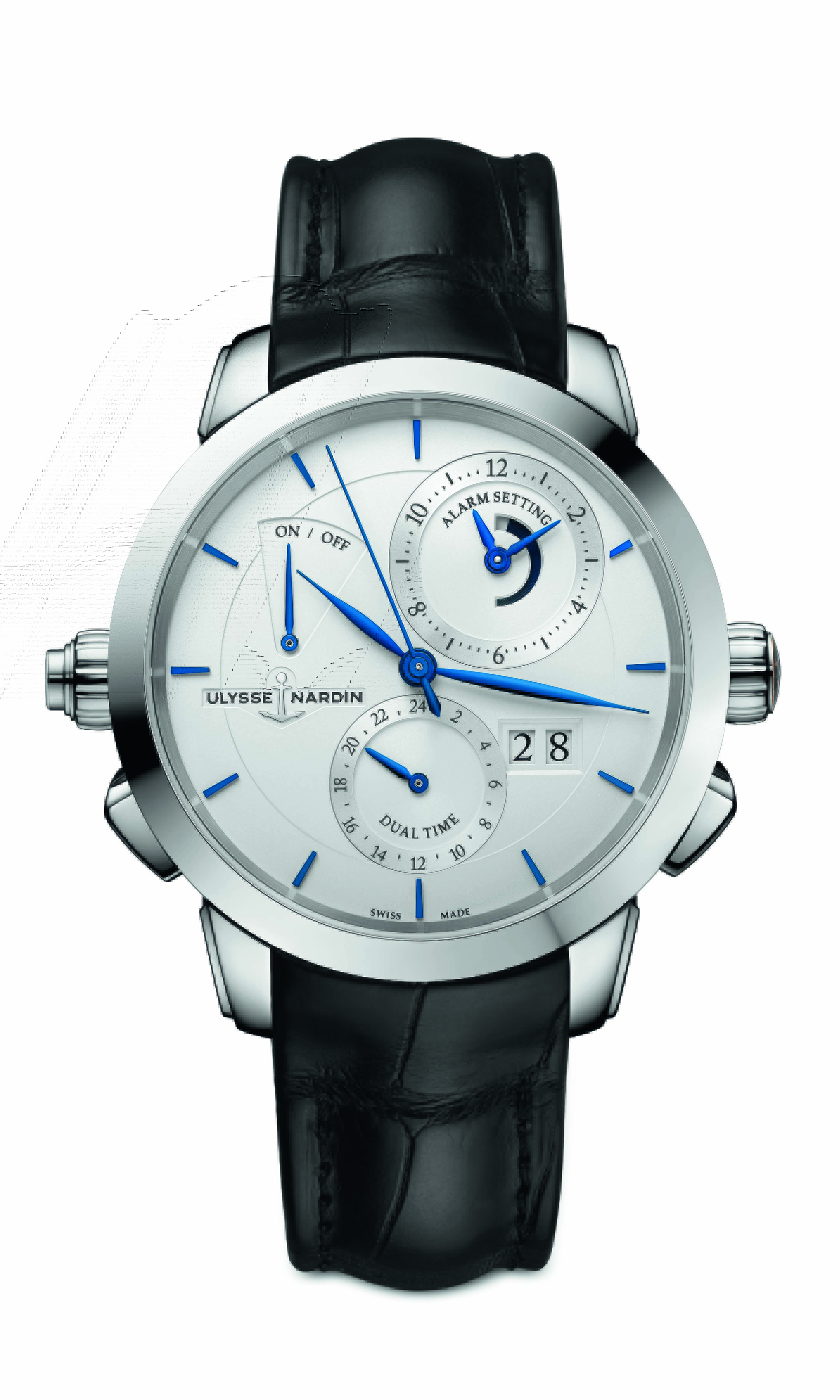 The Classic Sonata features a classic design, because isn’t simplicity the ultimative form of sophistication? And the mechanic complications this watch comes with are pared down to their most essential form which makes this timepiece an ideal travel companion.
On the dial between 12 and 2 o’clock the alarm function is placed which wakes the user with a pleasant cathedral cime – an obvious upgrade to your usual smartphone alarm. In the center of the counter, the “countdown” display of the last 12 hours allows to select a wake-up in the morning or in the afternoon. And a small display between 10 and 11 o’clock shows if the alarm is activated or not.
The Dual Time function ensures, that both home time and current time can be viewed simultaneously. Time zone adjustment can be made both forwards and backwards, just by using the pushers to change the position of the hour hand.
At the 4 o’clock position Ulysse Nardin has placed a big date in a double window. The dial is protected by a anti-reflective sapphire crystal.

The Ulysse Nardin Classic Sonata is powered by the in-house calibre UN-67. This automatic movement drives hours, minutes and seconds, the alarm function and the Dual Time function as well as the big date. It also guarantees a 42 hour power reserve when fully wound.

The Classic Sonata is available in two editions: in eternal black and a rose gold case or in stainless steel with blue markers. The cases measure 44 millimetres in diameter and are water resistant to 30 metres. The sapphire crystal case back allows to look inside the movement with its beautiful complications.
Bot versions feature  a black alligator strap.