Patek Philippe introduced a new wristwatch, the Calatrava Weekly Calendar Ref. 5212A-001, at the Baselworld, a new function for calendar watches: The weekly calendar is a semi-integrated mechanism. In addition to the day of the week and the date it also displays the week number.
Patek Philippe has developed a broad spectrum of calendar functions, from the simple aperture date to the extremely complex secular perpetual calendar that is preprogrammed into the 28th century. For quite some time, the perpetual calendar has established itself as a genuine specialty of the manufacture. In 1996, the manufacture introduced the annual calendar, which only needed to be corrected once a year (on March 1), and in 2013 came another innovation with a instantaneous day-of-week and date display. Now, Patek Philippe is taking a step forward by expanding its collection of “useful complications” with the addition of a weekly calendar that displays the current week number. It is a decidedly practical function in a globalized world, even in the smartphone era. 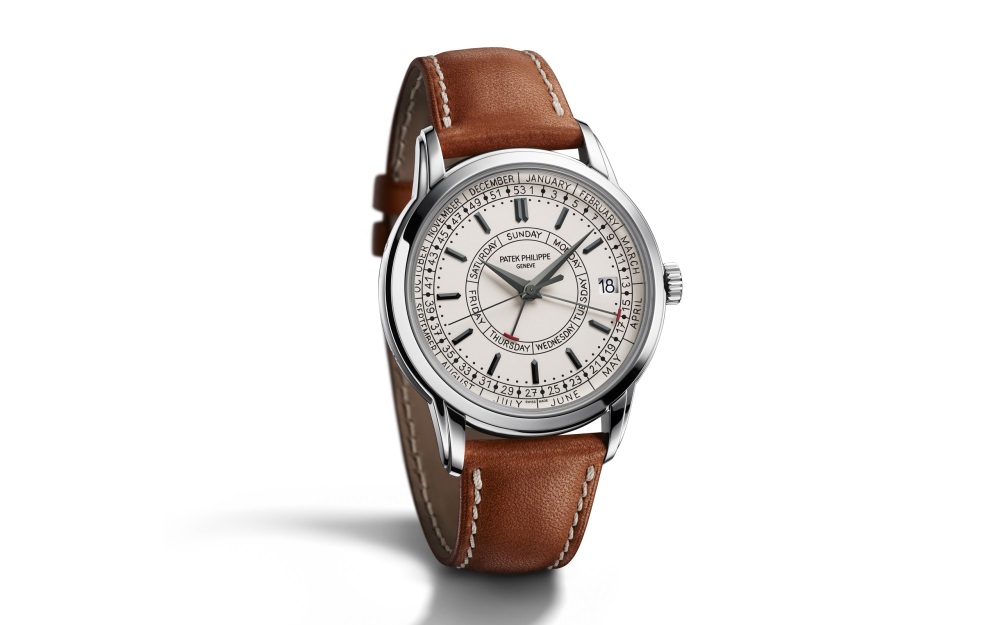 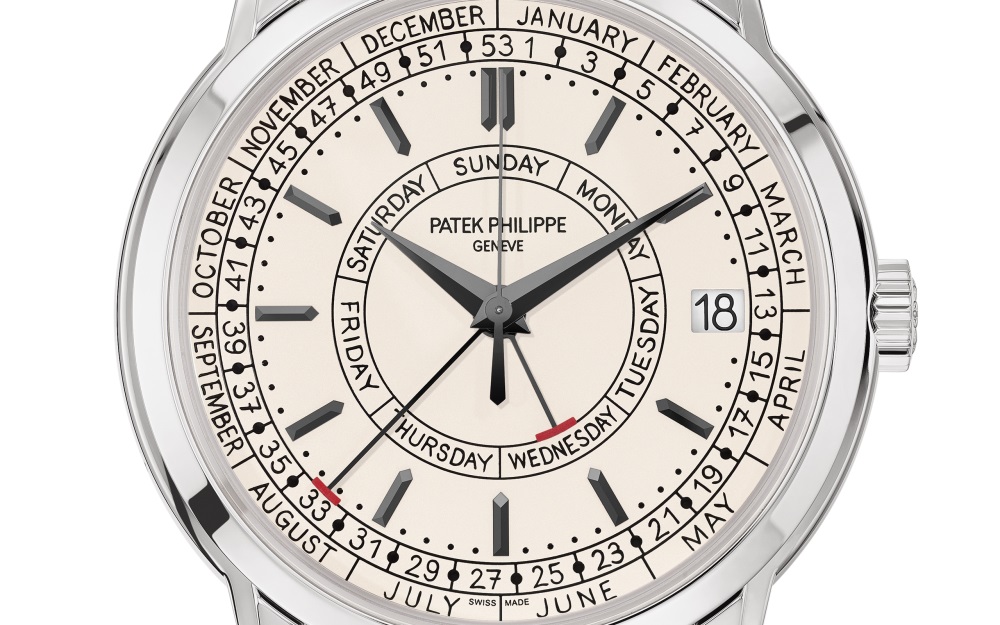 The new Calatrava Weekly Calendar Ref. 5212A-001 expresses its uniqueness with a silvery opaline dial and the unusual layout with five hands from the center – quite a rare configuration. The hours and minutes are indicated with Dauphine hands in blackened white gold. They feature two lapped facets, a perfect match for the applied baton indexes, also in blackened white gold. A slender counterbalanced hand tracks the seconds. The day of the week is displayed by a hammer-shaped hand with a red hammer head on a circular scale in the middle of the dial. A second hand of the same design delivers week number and month readings on two concentric scales at the periphery of the dial. these calendar indications are complemented by an aperture date at 3 o’clock. Another special feature: The typography created explicitly for this watch is based on the handwriting of one of the manufacturer’s designers and recalling an epoch in the not too distant past when notes were still written by hand.

With a diameter of 40 mm and a thickness of 11.18 mm, the new Calatrava is moderately proportioned. The case is made of stainless steel – a rarity a Patek Philippe. Also special is the ingenious construction of the bezel that extends over the two-tiered, gently curved strap lugs. The Calatrava Weekly Calendar Reference 5212A-001 features a box-type sapphire-crystal glass with a slightly cambered profile. The case is water-resistant up to 3 atm. 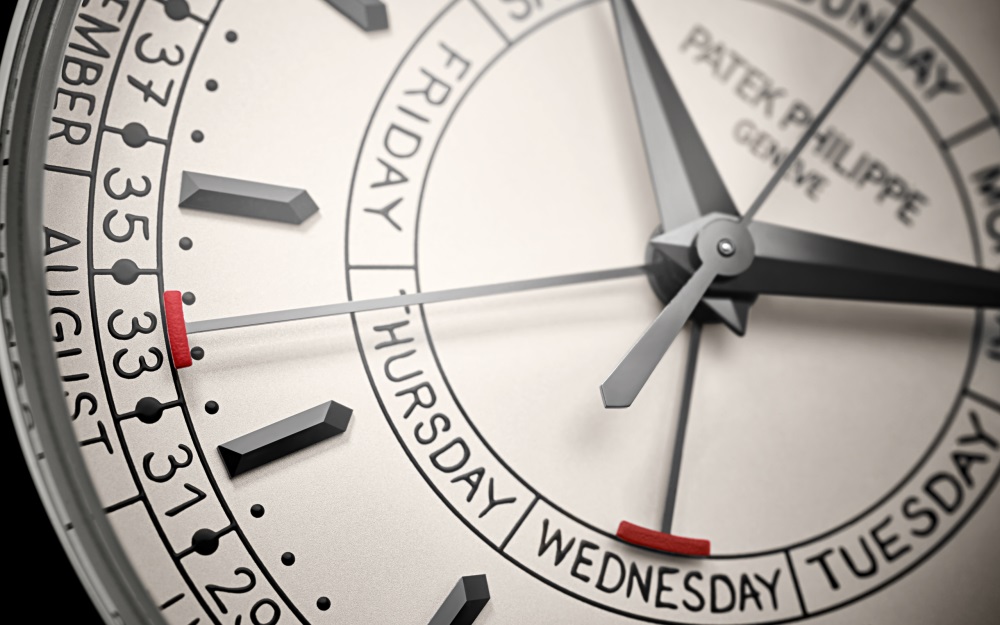 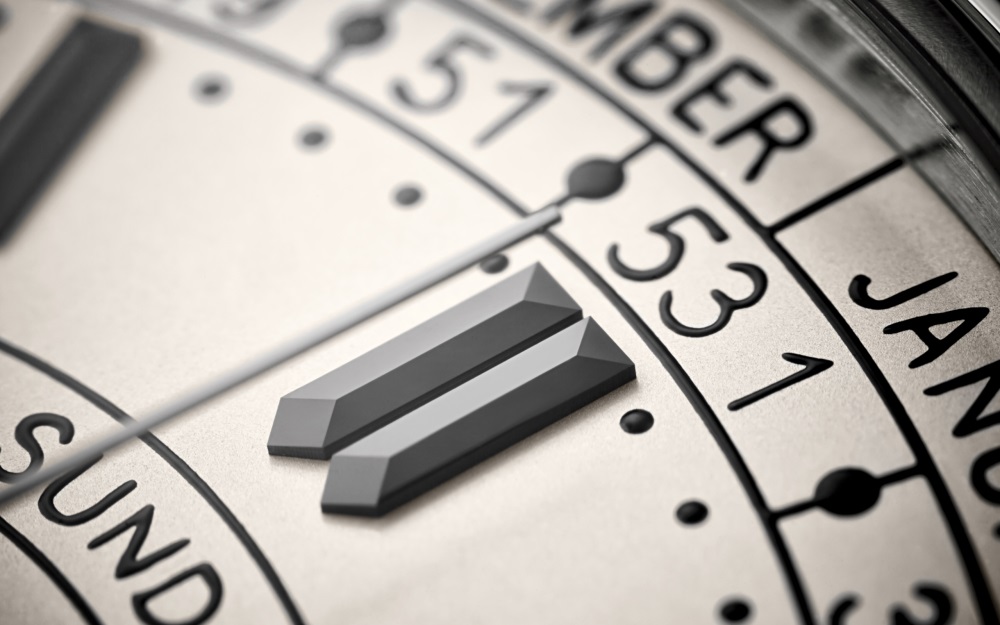 To display the day of the week and the number of the current week, Patek Philippe developed a totally new semi-integrated mechanism. The calendar displays advance semi-instantaneously in discrete steps to avoid energy consumption peaks. Corrections of the day-of-week and wek-number displays are performed with two push pieces recessed in the case flank at 8 and 10 o’clock. the date is corrected via the crown. Thanks to a fail-safe concept, such corrections can be performed at any time of day or night without risking damage to the movement.
The weekly calendar mechanism is not the only special feature of the Ref. 5212 – it is equipped with a completely new movement. It is based on the self-winding caliber 324 and sports several innovations and optimizations that improve its performance and dependability. Patek Philippe has also revised the automatic winding system.

The sapphire crystal case back reveals the refined architecture and meticulous finishing of the 26-330 S C J SE calibre.
The Calatrava Weekly Calendar Reference 5212A-001 is equipped by a light brown calfskin strap. 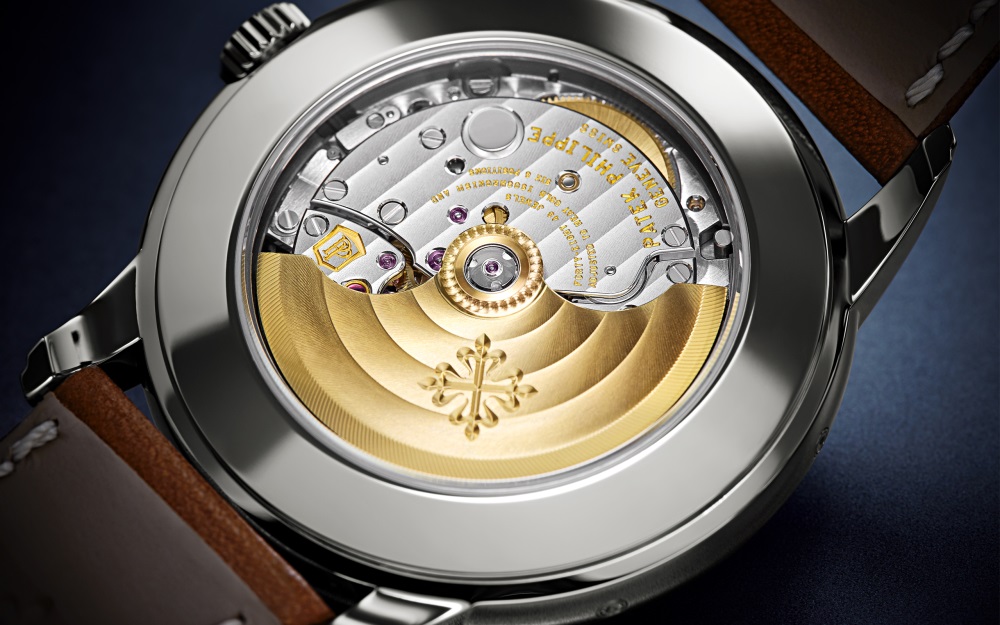 Ah, with one of its newest watches, Patek Philippe seduces all the ladies out there who want a beautiful, luxurious watch that simultaneously satisfies their needs for technical excellence. As early as 2009 the manufacturer introduced a chronograph exclusively for feminine wrists. It was the debut of a classic manufacture-made chronograph movement  (column wheel, horizontal clutch, manual winding) that had been developed entirely in-house. That was also expressed by the name of the watch: Ladies First Chronograph Ref. 7071, built until 2016. And now, the Genevan manufacture is enriching its collection with a new, captivating model. 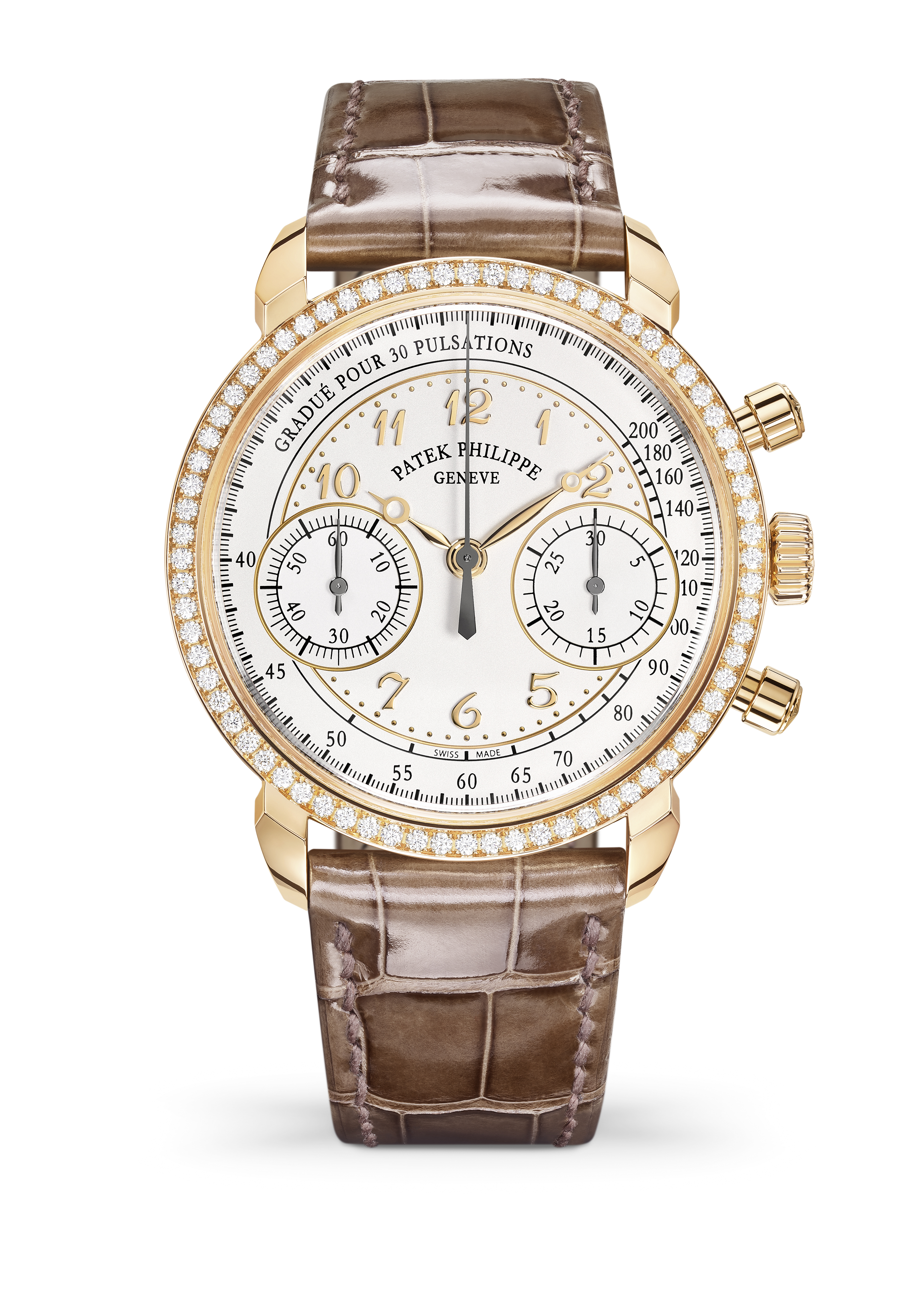 The new chronograph Ref. 7150/250R-001 is a technically sophisticated watch with a totally new face. The cushion-shaped case has been replaced with an elegant, round rose-gold case with a diameter of 38 mm featuring a bezel set with 72 diamonds. Its timelessly sleek design is emphasized by refined vintage looking details such as the fluted and curved lugs, the round chronograph pushers with guilloched faces, and the cambered sapphire-crystal “box” glass. The case is water-resistant up to 3 bar.

The silvery opaline dial also combines a contemporary style with classic aesthetics, showcasing sculpted Breguet hour and minute hands in rose gold and a display layout that makes it eminently legible. At 3.30 you’ll find the 30-minute-counter and the running seconds is placed at 9.30. The pulsometer scale of the new model pays tribute to the tradition of classic chronographs that can measure the cadence of an active lifestyle or slightly increased heart rate of its proud owner. 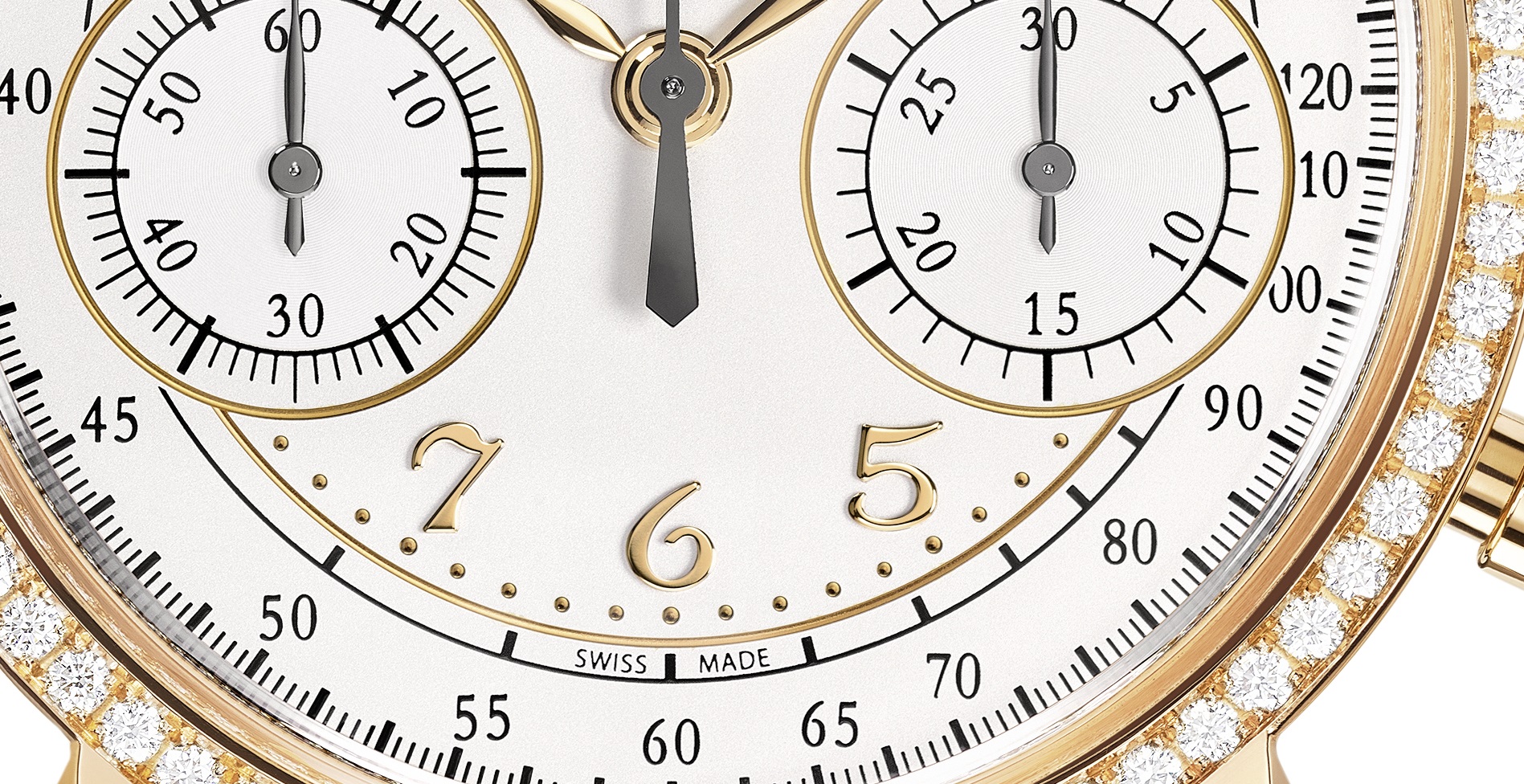 The compact case accommodates the manually winding calibre CH 29-535 PS movement with an instantaneous 30-minute counter. Patek Philippe has crowned its classic architecture with six patented innovations and its lavish finissage can be admired through the box-type sapphire-crystal case back that is slightly chamfered to echo the profil of the rear bezel. The movement works with 28.800 vph and boasts a power reserve of 65 hours.

The Ref. 7150/250R-001 is worn on a shiny mink gray alligator leather strap. Its rose gold buckle is encrusted with 27 diamonds.