The Doxa SUB 300 is the result of a partnership that reconnects tow legendary brands: Doxa and Aqua Lung. This watch builds a bridge between the past and the future, since it is the first time the SUB 300 comes in carbon.
In 1967, Doxa launched the revolutionary SUB concept with the SUB 300, considered to be the first truly purpose-designed watch that is also accessible to the general public. The radical innovations it introduced, quickly made it the benchmark for professionals, too. Rated to 30 atm, it marked the first with a patented rotating bezel that allowed the diver to calculate and monitor no-decompression dive times based on the official US Navy dive tables. Another first was the bright orange coloured dial which contrasted strongly with the traditional black or white dials of the time. This made the DOXA Sub 300 instantly recognizable and gave it the legendary status it still holds today.
More than 50 years after its launch, the SUB 300 is now reinterpreted in carbon. The SUB 300 Aqua Lung US Divers pays tribute to a rich past while reconnecting with Aqua Lung through an official partnership.

So light compared to its stainless steel peers, the SUB 300 in forged carbon gains an urban camouflage vibe. Jet black alternating with shades of charcoal: The iridescent effect plays with reflections that change with the intensity of ambient light, making for a more radical look.
Far from the conventional classic black cases, the texture and colors of forged carbon are simply unique. Matte, raw, high-tech, the material seems both very compact and irregular. This very particular non-homogenous pattern, achieved by working with randomly oriented carbon fibers, creates a subtle balance between the deference to its roots and the need to break new ground.
Thus, the SUB 300 Carbon Aqua Lung US Divers builds on its origins while cultivating an edgier, more technical but also urban look. This is also ensured by the discretion of black contrasts with the assertive presence of white and yellow on the dial. All dive-related markings have a Super-LumiNova luminescent coating to ensure optimum readability during dives under low visibility conditions. The white indeces are clearly visible, as is the dual indication of dive time in minutes and depth in feet on the famous unidirectional rotating bezel for calculating and monitoring no-decompression dive times. The inserts of the diving scale defined by the bezel are white, with a white dot at 12 o’clock. The depth indications in feet on the outer bezel ring are yellow for visual differentiation, with a yellow dot at 12 o’clock.
The bright yellow minute hand of the Doxa SUB 300 Carbon Aqua Lung US Divers is the same yellow as the Aqua Lung logo placed at 7 o’clock.

With a diameter of 42.5 mm, the SUB 300 Carbon Aqua Lung US Divers features a pressure-resistant titanium chamber and a screw-down crown to protect the movement. This watch is water-proof up to 30 bar and is equipped with a scratch-resistant, anti-reflective sapphire crystal which echoes the domed plexiglass of early SUB generations.

Precision, robustness, reliability: All the automatic movements that power the 300 units of the SUB 300 Carbon Aqua Lung US Divers are COSC certified. This guarantees highest standards in chronometric performance and scrupulous compliance with important quality features. The calibre ETA 2824-2 works at a frequency of 4 Hz and offers a power reserve of 40 hours minimum.

The watch is fitted with a black soft rubber strap.

It’s been two years since RJ has introduced its last Spider-Man watch. That’s why we were pretty euphoric when we heard about the latest collaboration with Marvel – all the more when it became clear that not just one, but two Spider-Man models came out of this association: The ARRAW Spider-Man and the ARRAW Spider-Man Tourbillon.

The RJ ARRAW Spider-Man is an openworked watch that features many references to the comic book hero on its dial. Below that works the skeleton movement, which comes in the form of a spider’s web. The small second, which lies between 8 and 9 o’clock, sits in it in the form of a bright red spider.
The automatic movement operates at a frequency of 4 Hz and offers a power reserve of at least 48 hours. RJ built all of this in a robust black carbon case that comes with a water-resistance of 10 atm.
The RJ ARRAW Spider-Man is a limited edition of 100 pieces.

The ARRAW Spider-Man Tourbillon is the first complication that RJ developed and manufactured in-house. The tourbillon construction is entirely co-axial, with a peripheral display of the hours and minutes. This central tourbillon was developed by RJ not only because the manufacturer wanted an in-home complication, but primarily to increase the power reserve to 150 hours (or 6 days).
In order to maintain perfect symmetry, the RJ decided to design the case without a crown. The winding process is done by lifting a hoop found on the case of the back, then turning it like a key. To set the time, a concealed push button at 6 o’clock must be pressed. In order to provide maximum insight into the openworked movement, RJ opted for a sapphire crystal case back.
The case has a diameter of 45 mm, is water-resistant up to 10 atm and is made of black carbon or, in a second version, a red glass fibre composite and carbon. And it is equipped with RJ bumpers in rubber.
The RJ ARRAW Spider-Man is limited to 99 pieces.

RJ offers only 10 models of every version of the ARRAW Spider-Man Tourbillon.

TAG Heuer has introduced its newest and simultaneously most modern interpretation of its famous Aquaracer. The watches – three different versions overall – combine an urban look that combines comfort, durability and sportiness.
The first models of this ultra-light, hard-wearing and modern special series are the first of a collection, TAG Heuer will extend over the next months. The Carbon series also comes with the appropriate name: Aquaracer Carbone. 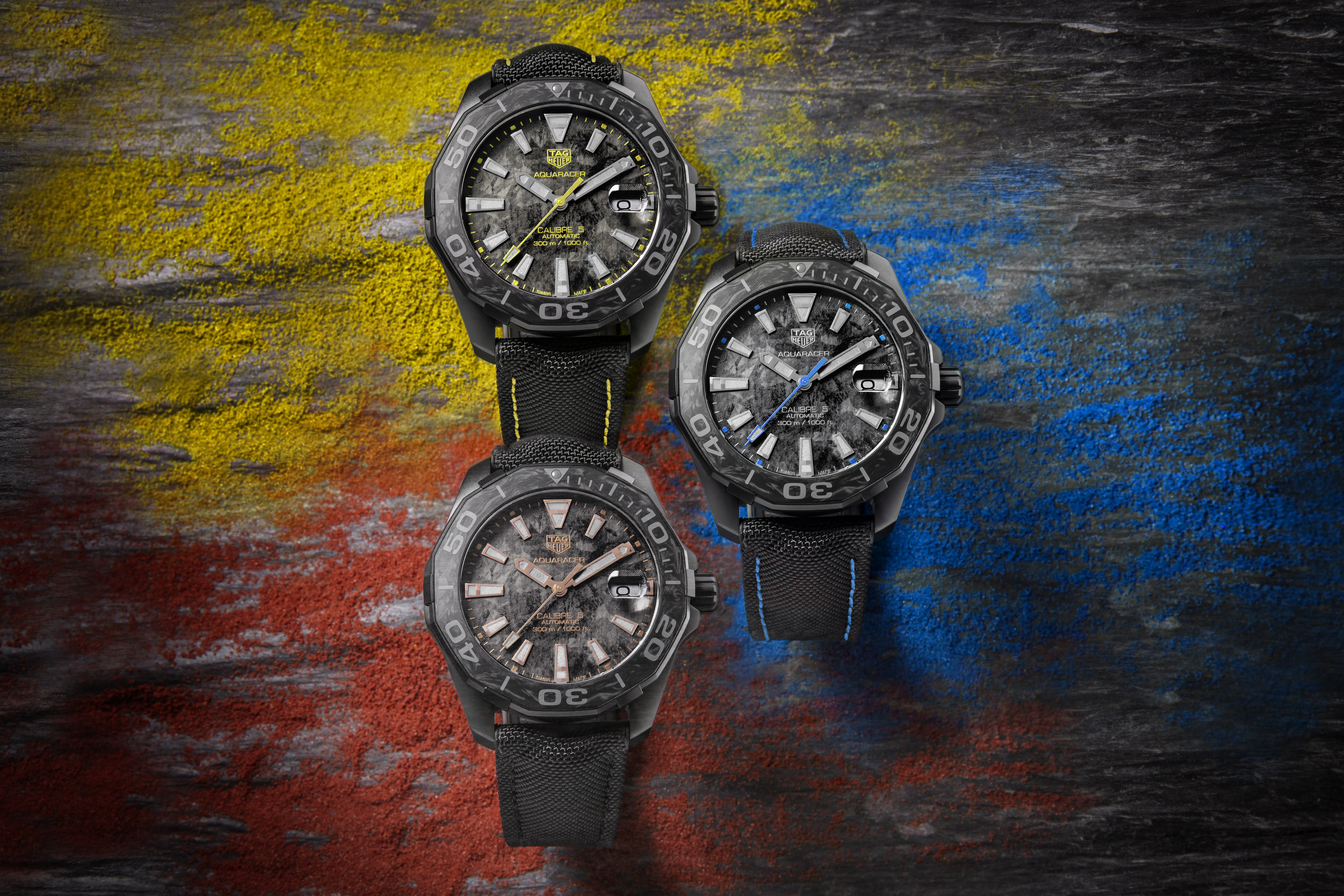 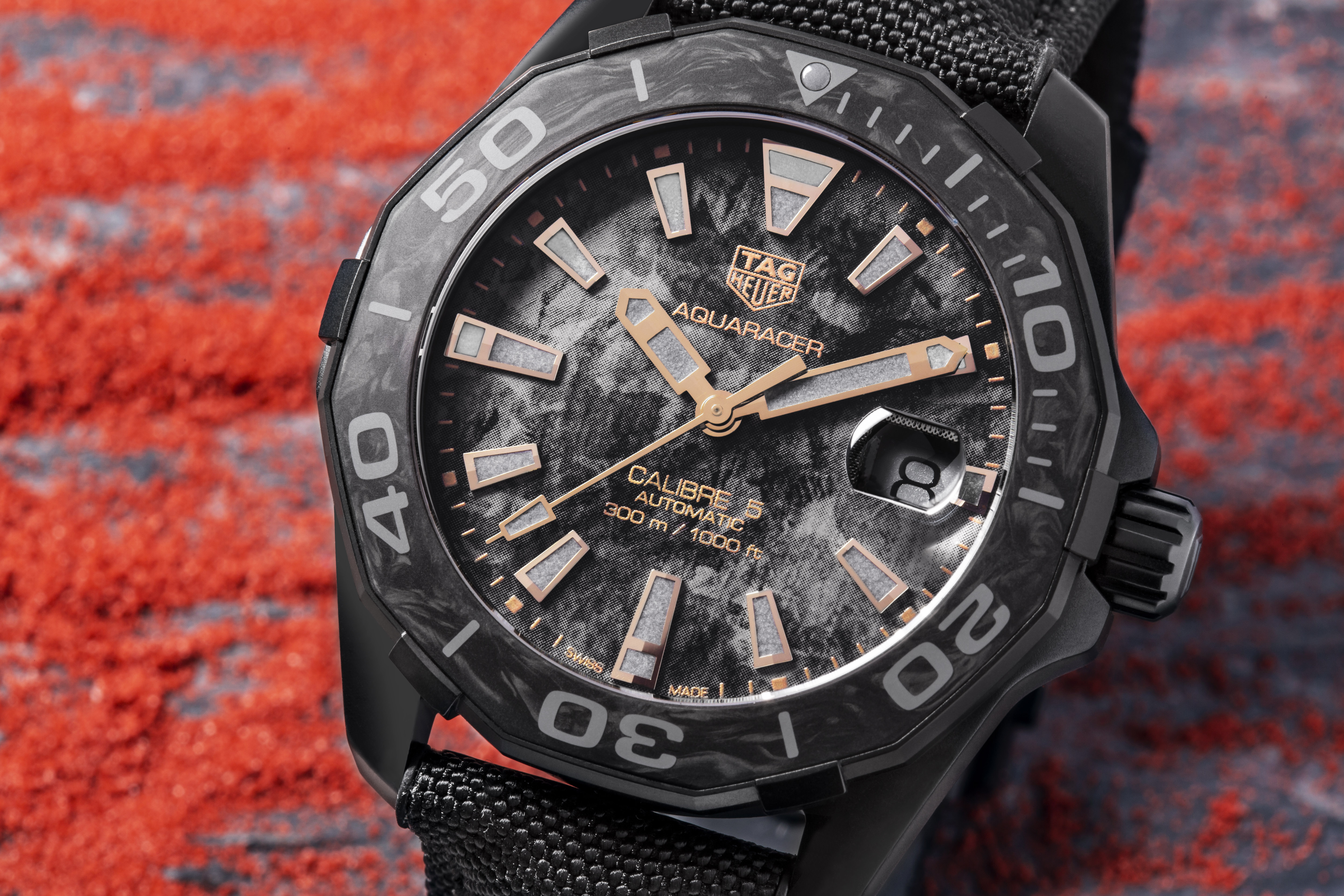 The dial boasts an imitation carbon effect. TAG Heuer offers the Aquaracer Cabone in three different versions, which are sporting accents in either blue, yellow or pink gold. But in these watches, black is clearly the dominating color which raises the issue of readabiltiy. But TAG Heuer didn’t skimp in terms of Super-LumiNova and yes, it’s deep grey in daylight. Which is pretty cool because it’s practically seamlessly blending into the background as long as it isn’t dark.
Over the dial lies a sapphire crystal, sporting an ingrained magnifier at the 3-o’clock position. These cyclops are always controversial and often crucial in terms of liking a timepiece or not. But that’s how it is, and may we say that the cyclops is integrating itself quite beautifully into the overall design of the Aquaracer Carbone.

The 41-mm-case is made from titanium with black PVD coating. Thanks to the random injection of carbon fibres into a resin pressed at high temperatures, each peace is unique, boasting an exclusive black and grey marbled motif. So, even if the case is not made from carbon, there is carbon in it – but I think we can all agree, the name might be a bit misleading.
Like one would expect from a diver’s watch, the TAG Heuer Aquaracer Carbone is water-resistant up to 30 atm. 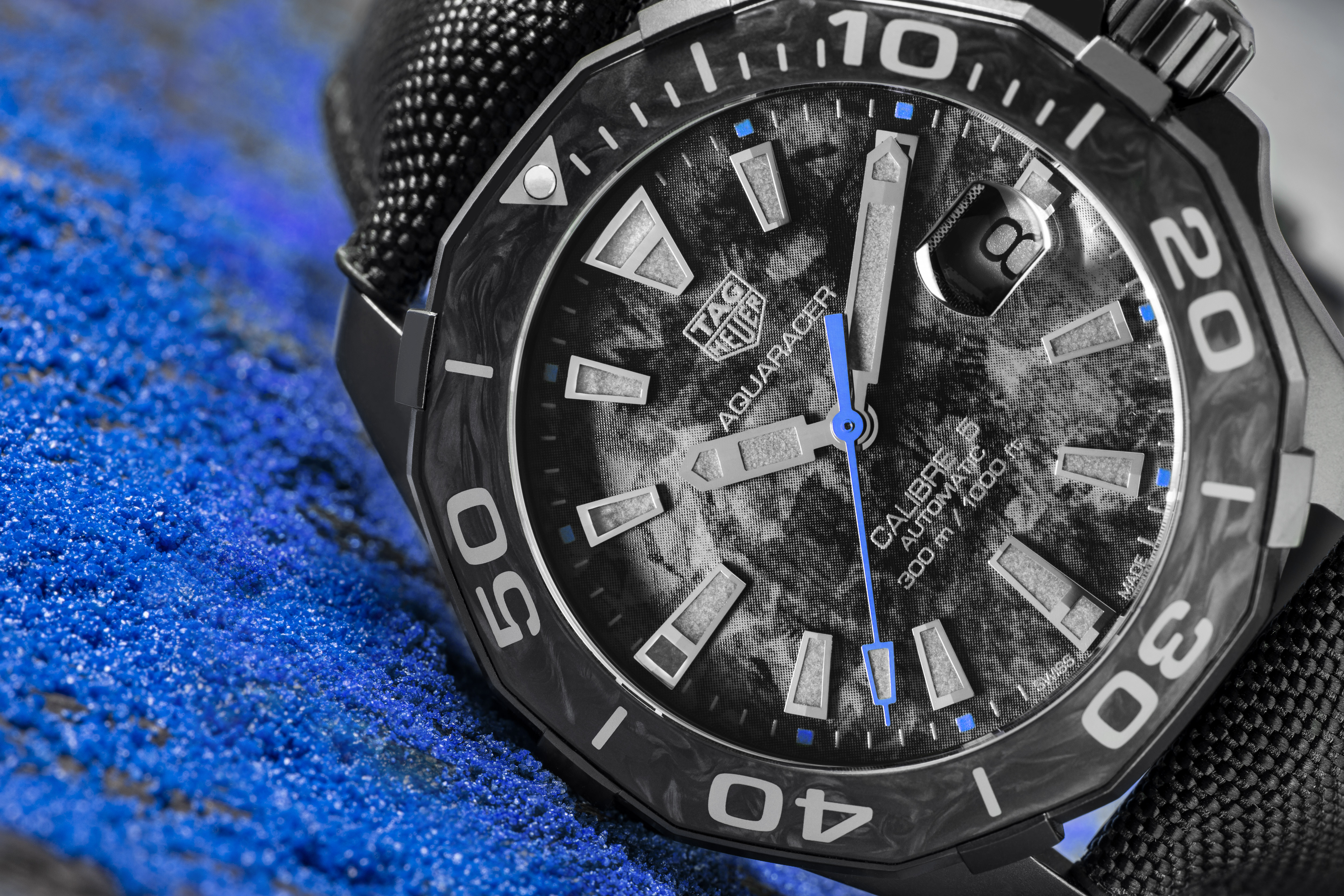 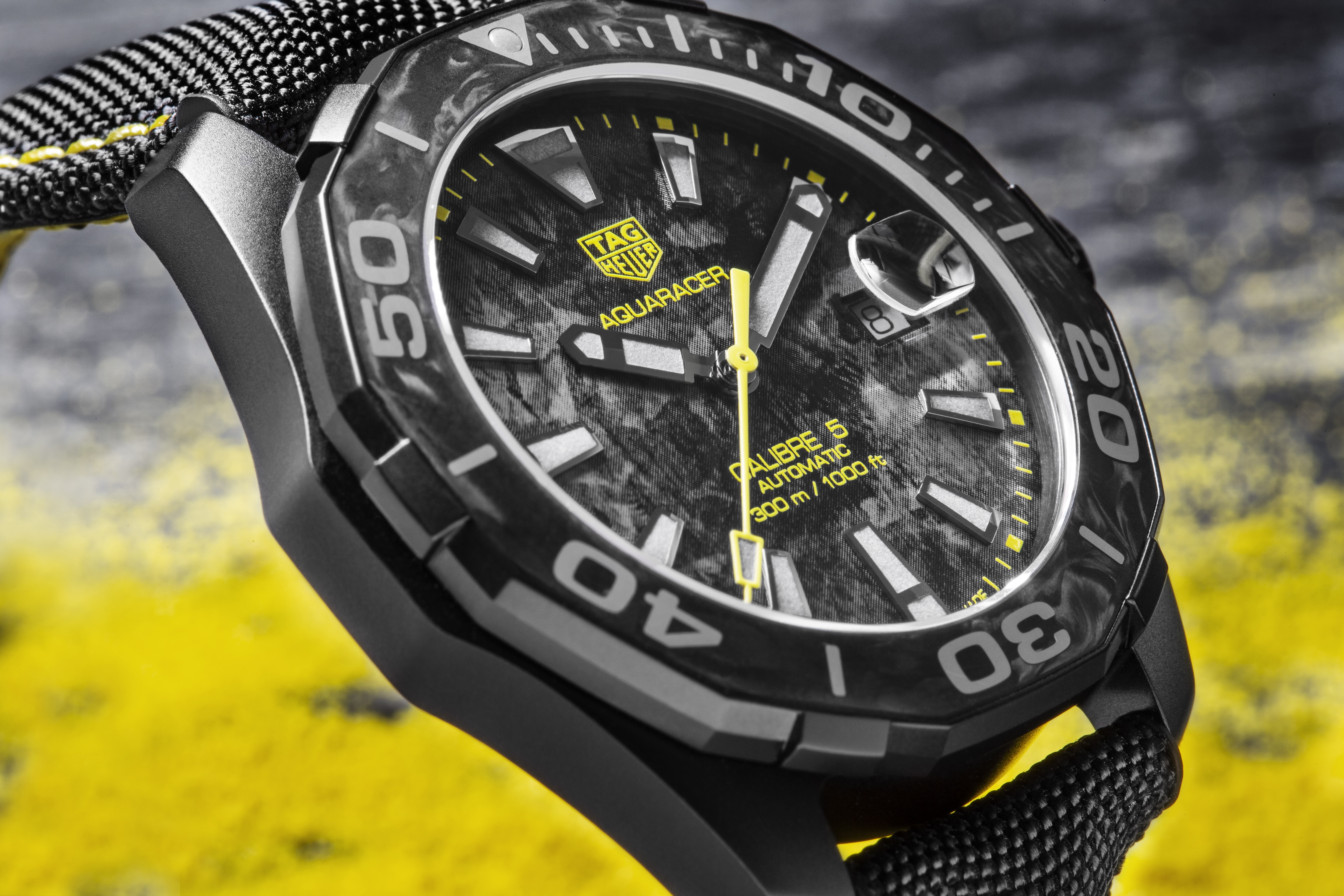 The technical details are the same as in the Aquaracer, TAG Heuer has incarnated three years earlier. All models are powered by the Calibre 5. The automatic movement is working at a frequency of 4 Hz and provides a power reserve of approximately 38 hours. Since the case back is solid (also made from PVD coated titanium), the movement cannot be observed.

All three models are completed by black nylon straps with black, yellow or blue topstitching, matching the colored accents on the dials.