The new Millenary Frosted Gold Philosophique is a statement of creative freedom and free-spirited individuality. This watch has made it its mission, despite the rush and frenzy of today’s world, to offer its wearer an entirely new view of the time available to them. With its single hand, this wristwatch stands against today’s conventions of timekeeping, against the constraints of the tireless quest for precision that characterizes not only our day-to-day lives but also modern industry. Inspired by the aesthetics of 17th-century single-hand timepieces, the new Millenary Frosted Gold Philosophique also tells time in a more philsoophical way.
Audemars Piguet introduced its first Philosophique watch in 1982, in the midst of the quartz crisis. The Manufacture responded to this severe shock to the watchmaking industry by producing more innovative mechanics.
The Millenary watches are also a tradition at Audemars Piguet. Since they first appeared in 1995, this line has been a canvas for creativity with its elliptical case, eccentric dials and visible hand-wound movement.

The Millenary Frosted Gold Philosphique has been meticulously hand-finished by Audemars Piguet’s watchmakers. The pink or white gold case presents alternating satin brushing and Frosted Gold finishing, a technique the manufacturer owes to Florentine jewellery designer Carolina Bucci. The diamond-dust it creates is the result from hours of meticulous micro-hammering.

Adding a sublte touch of color, the see-through caseback reveals the oscillating weight, which coloured plates recall the hand-crafted dimpled dial in shades of brown or blue. The single hour hand is polished and sand-blasted.

Adding to the current hand-wound collection, this watch is equipped with a new automatic movement, the calibre 3140. It is endowed with a patented mechanism which ticks the hand around the dial in an elliptical trajectory. The hour wheel directly corresponds with a transparent disc on the dial, on which the single hand is mounted. This enables the hand to follow a clear trajectory despite the elliptical case.

Both Millenary Frosted Gold Philosophique versions are equipped with an alligator leather strap. 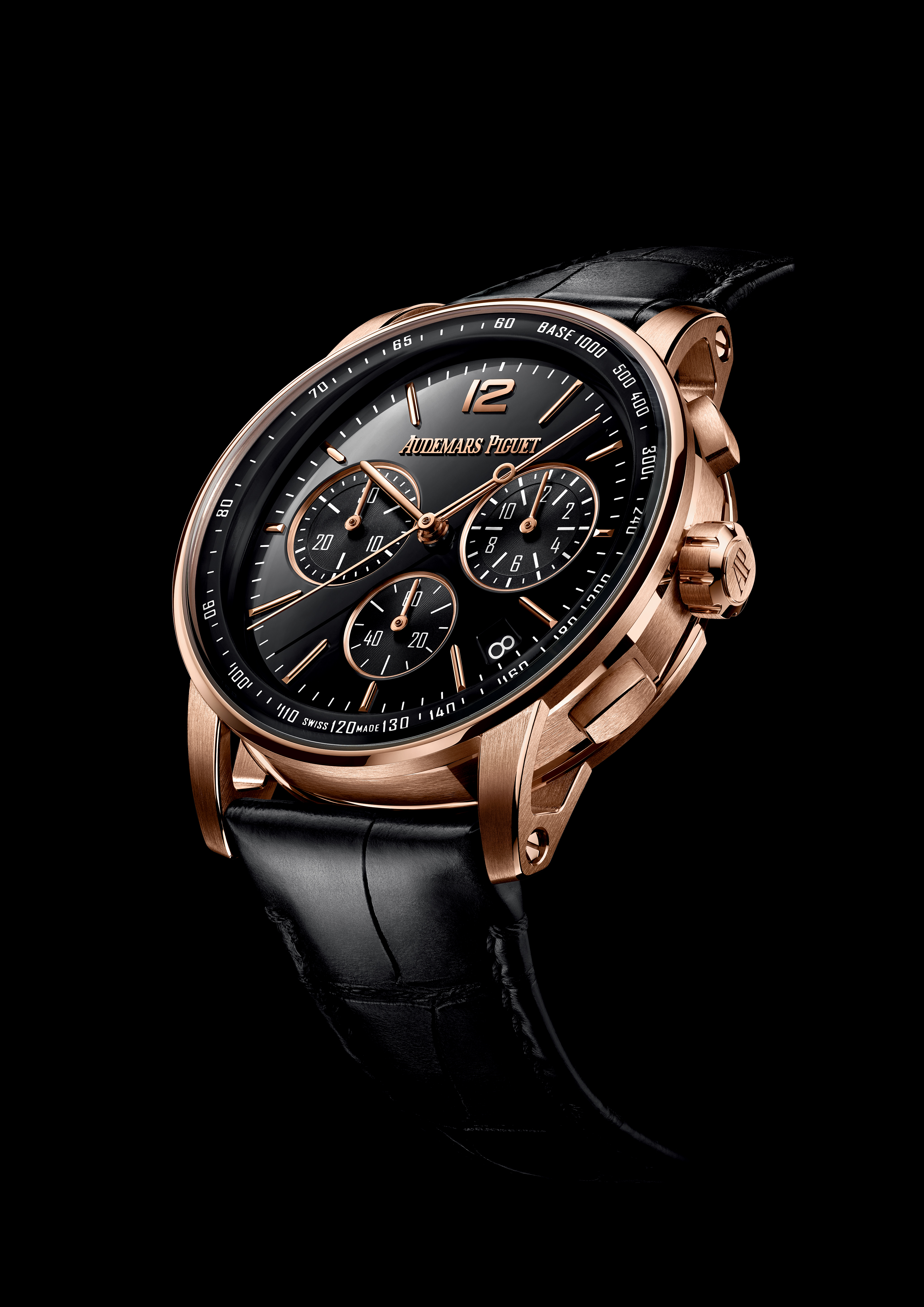 Audemars Piguet has introduced a new watch line called Code 11.59 at the beginning of this year. Once again, the watch manufacturer was faced with the challenge of setting new standards. From the very beginning, the company has been working with the best craftsmen, who perform their profession at the highest level. Nevertheless, Audemars Piguet is constantly trying to penetrate new fields of highest craftsmanship and to advance the technical perfection of its own procedures and production standards.
With 13 models, including four complications, code 11.59 represents one of the most comprehensive launches in the history of Audemars Piguet. Also, for the first time the Manufacture is presenting a collection designed for both men and women.

The selfwinding chronograph’s deep blue or black lacquered dial offers a perfect mirror finish. The pink or white gold case echoes the polished gold curved indexes and singular numeral at 12 o’clock as well as the raised logo and long stick hands. The chronograph counters are circled by gold threads with polished V angles, a difficult finishing on lacquered dials. At the 3 o’clock position you will find the subdial for the hours, at 9 o’clock the one for the minutes. The small second is placed at 6 o’clock and at 4.30 Audemars Piguet has lodged the date window. The latter blends in seamlessly in the background of the dial.
Audemars Piguet has lacquered the inner bezel – depending on the version – in blue or black. The dial is protected by a sapphire crystal which was specially designed for this collection. It is complex, double curved and glareproofed and with its arched profile it embodies the watch’s contemporary design. The glass’s internal surface is shaped like a dome, while its external surface is vertically curved from 6 to 12 o’clock. Its shape perfectly integrates the extra-thin bezel and extends from edge to edge. The play of depth, perspective and light creates a unique visual experience. 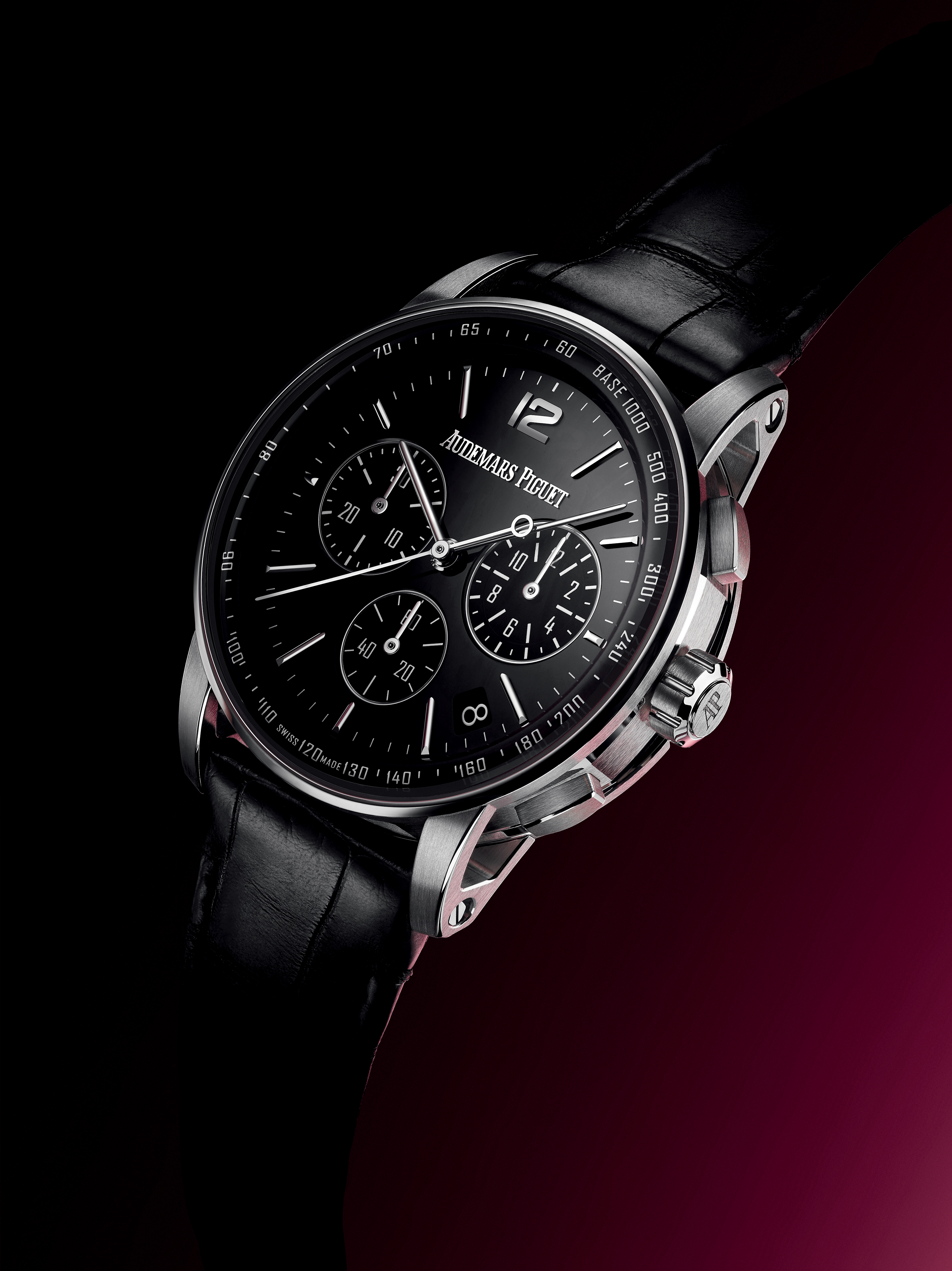 The new in-house calibre 4401 symbolizes Audemars Piguet’s constant quest for innovation. This calibre is endowed with an instant-jump date indication, integrated column wheel chronograph and flyback function that enables to re-start the chronograph without stopping and resetting it first. It has 70 hours of power reserve, as well as a dedicated pink gold beautifully openworked oscillating weight invisible through the sapphire crystal case back. This calibre also presents reinforced chronometry.
The movement operates at a frequency of 4 Hz or 28,800 vibrations per hour and consists of 367 individual parts.

The Selfwinding Chronograph is housed in a 41-mm-case with a water-resistance of 3 atm and is fitted with a hand-stitched large square scale blue or black alligator strap. 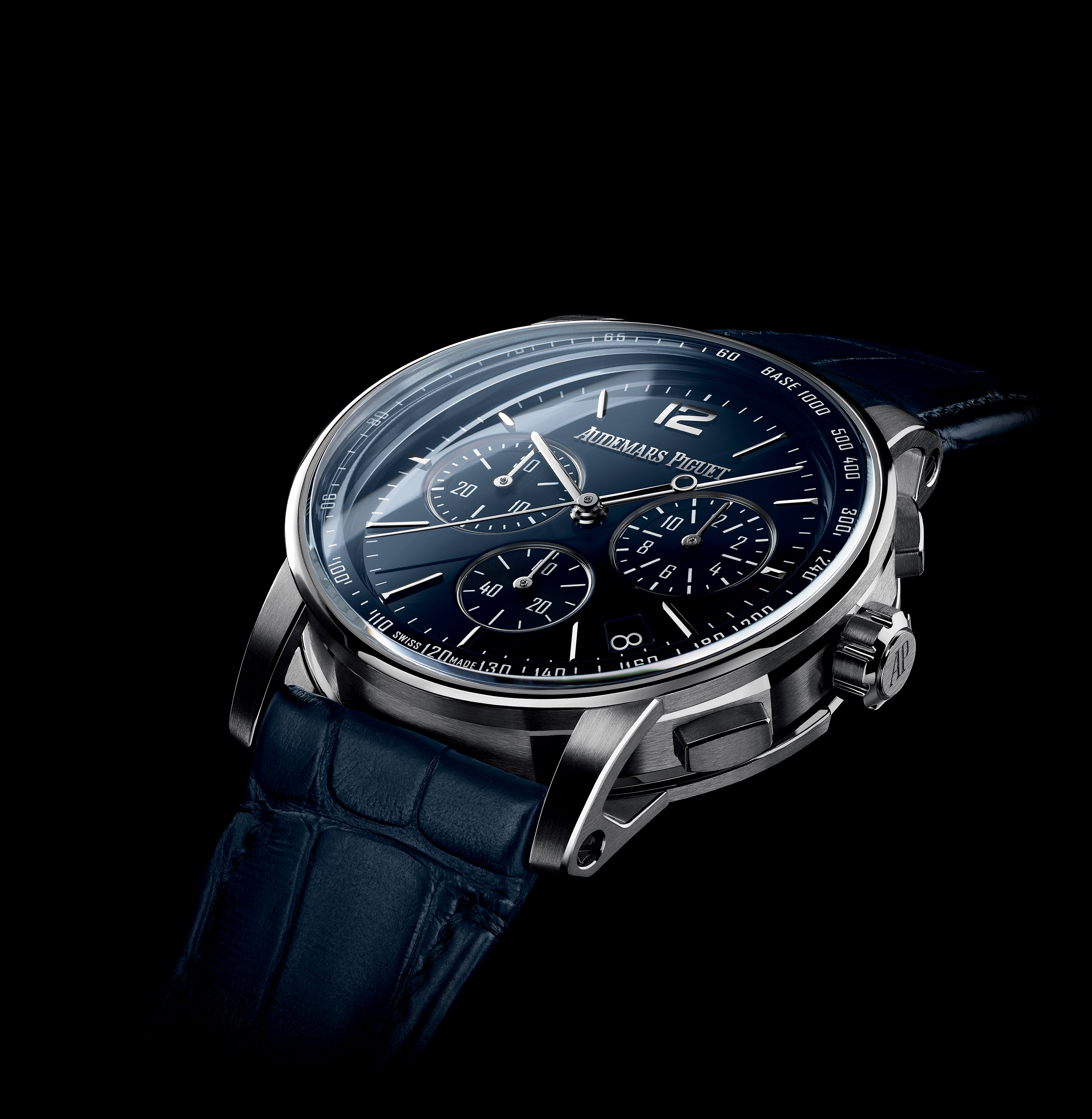