The new Gravity Equal Force is the newest timepiece from Armin Strom. This watch is not only demonstrating continuous innovation, one of the core principles of the manufacture, but also takes the traditional mainspring barrel and turns it on its head. The Gravity Equal Force also marks the launch of the new System 78 Collection, highlighting innovative watchmaking at a competitive price.

The inspiration behind Gravity Equal Force was a desire to transmit equal force to the balance, thereby increasing the consistency of rate. Building upon the classic stop-works mechanism, Armin Strom developed an ingenious stop-works declutch system that operates inside the mainspring barrell to limit the torque delivered to the balance, providing a smooth delivery. This represents the first time a stop-works declutch mechanism has been added to an automatic winding movement.
Not content with one innovation, Armin Strom found insight in a pocket watch in need of repair, which contained a motor barrel design showing clear advantages over the standard going barrel. So the watchmakers designed a barrel operating in the reverse of a traditional mainspring barrel driving the gong train via the barrel arbor and winding the barrel housing.
All of this is built into the new ASB19 calibre which works at a frequency of 3 Hz and provides a power reserve of up to 72 hours.

The new Gravity Equal Force also differs from previous models with a new off-center dial and slimmer case with a smaller diameter. The highlight of the watch is now the triplet of bridges. Moving to an off-center dial, the Gravity Equal Force is more legible to maximize the user experience.
The 41-mm-case is a first for Armin Strom. It is shaping a new aesthetic that showcases the reduction to the essential while maintaining the essence of the manufacture’s DNA.

Armin Strom is known for maintaining a pared-down approach when it comes to watches. This ensures the brand’s style of watchmaking remains focused on its essence. And with every new model Armin Strom heads further in that direction and the new Pure Resonance is no exception. This version too heads further in said direction, squarely placing emphasis on the watch’s most remarkable feature: the visible dual balances oscillating in resonance. 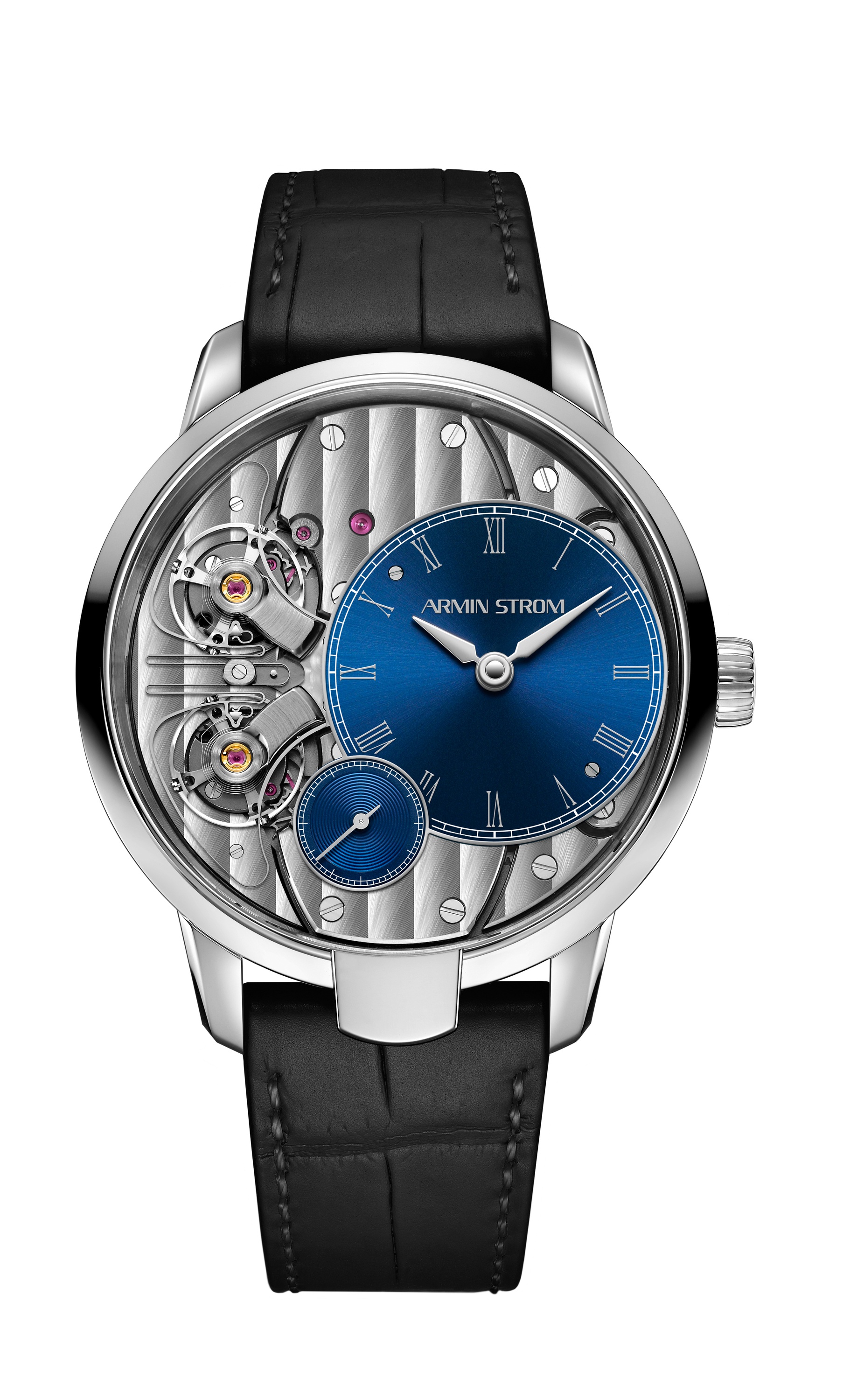 The goal of the Pure Resonance has not changed: to display the interesting resonant balances while improving overall precision. To this end, the twin seconds flyback mechanism of Caliber ARF15 was removed and replaced with one clear-cut subsidiary seconds subdial. The reason for this can be found in the straightforward approach to the movement: the fewer functions a timepiece must perform, the better it can concentrate on accuracy. In other words, with no superfluous functions the watch con focus fully on precisely providing the time.

The dial now offers just subdials for time displays. Roman numerals dominate the off-center subdial displaying hours and minutes in black and blue with blued steel hands, while a classic railroad track marks the exact minutes. The smaller subdial at 7 o’clock displays seconds using only a baton-styled white hand and a simple track.
The resonators are placed at the left side of the dial. The time displays receive their portioned energy from the lower regulator, while the upper regulator remains in place to create resonance. 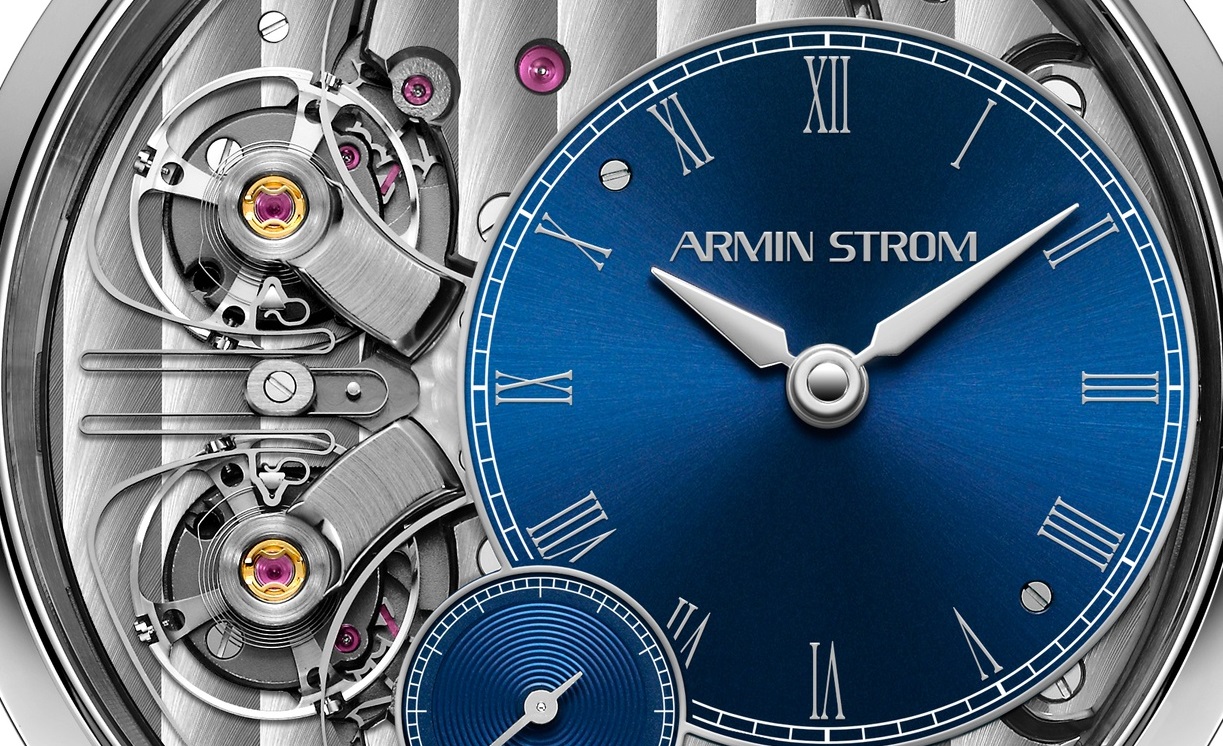 This conceptual forthrightness is reflected in the design of the movement: the basic calibre ARF16 showcases the resonant regulators and resonance clutch spring. New bridges are decorated with côtes de Genève. The mechanical movement beats at a frequency of 25,200 vph and provides a power reserve of 48 hours minimum.

The outward design of this new Pure Resonance has been kept also pure. The case has a diameter of 42 mm and comes in rose gold or stainless steel. It is 1.4 mm smaller than the original version, comes with reduced lugs and crown and practically no bezel. The characteristic lip at 6 o’clock remains, therefore it can be customized easily.
The case is water resistant up to 5 atm and comes with a leather bracelet. 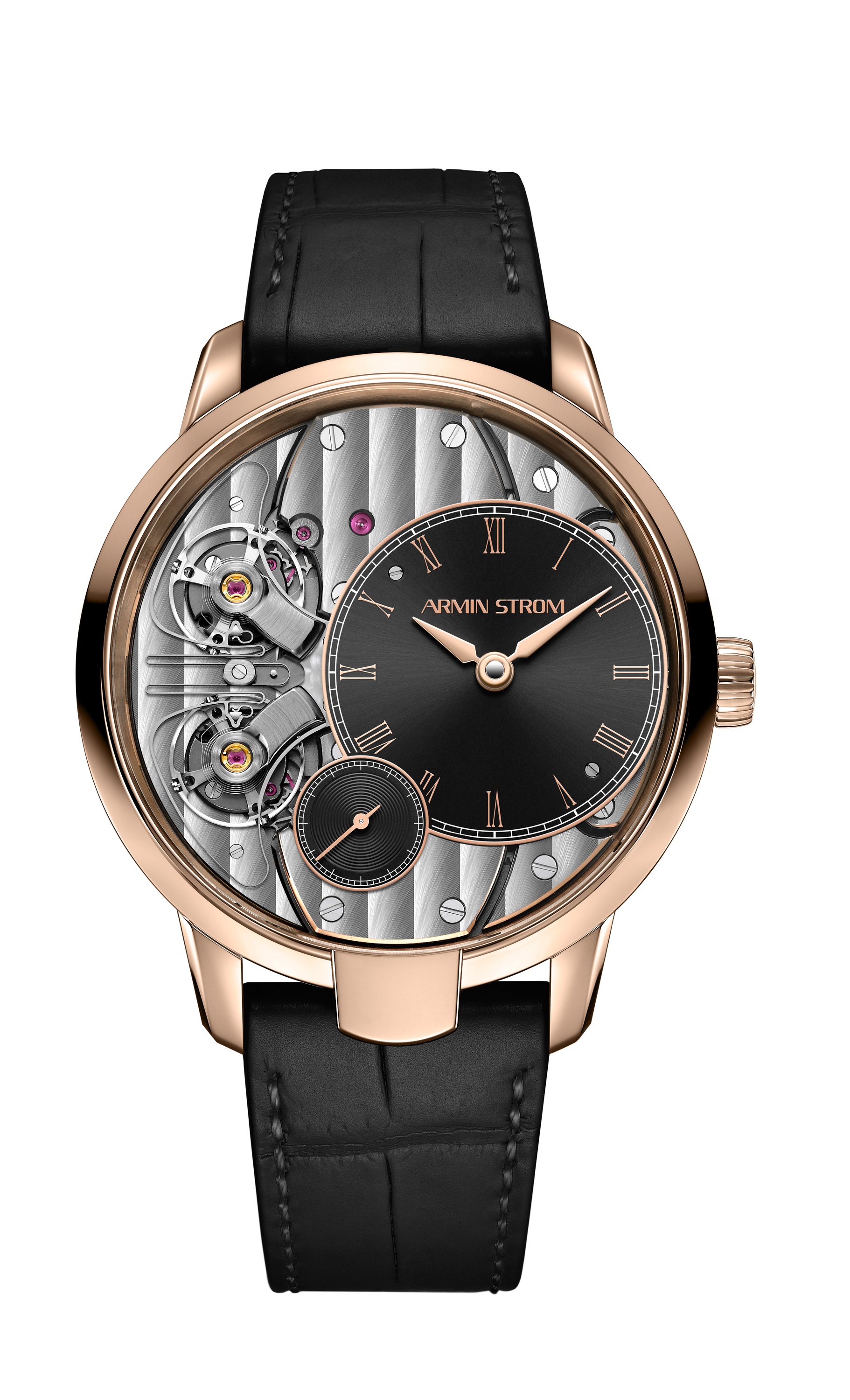 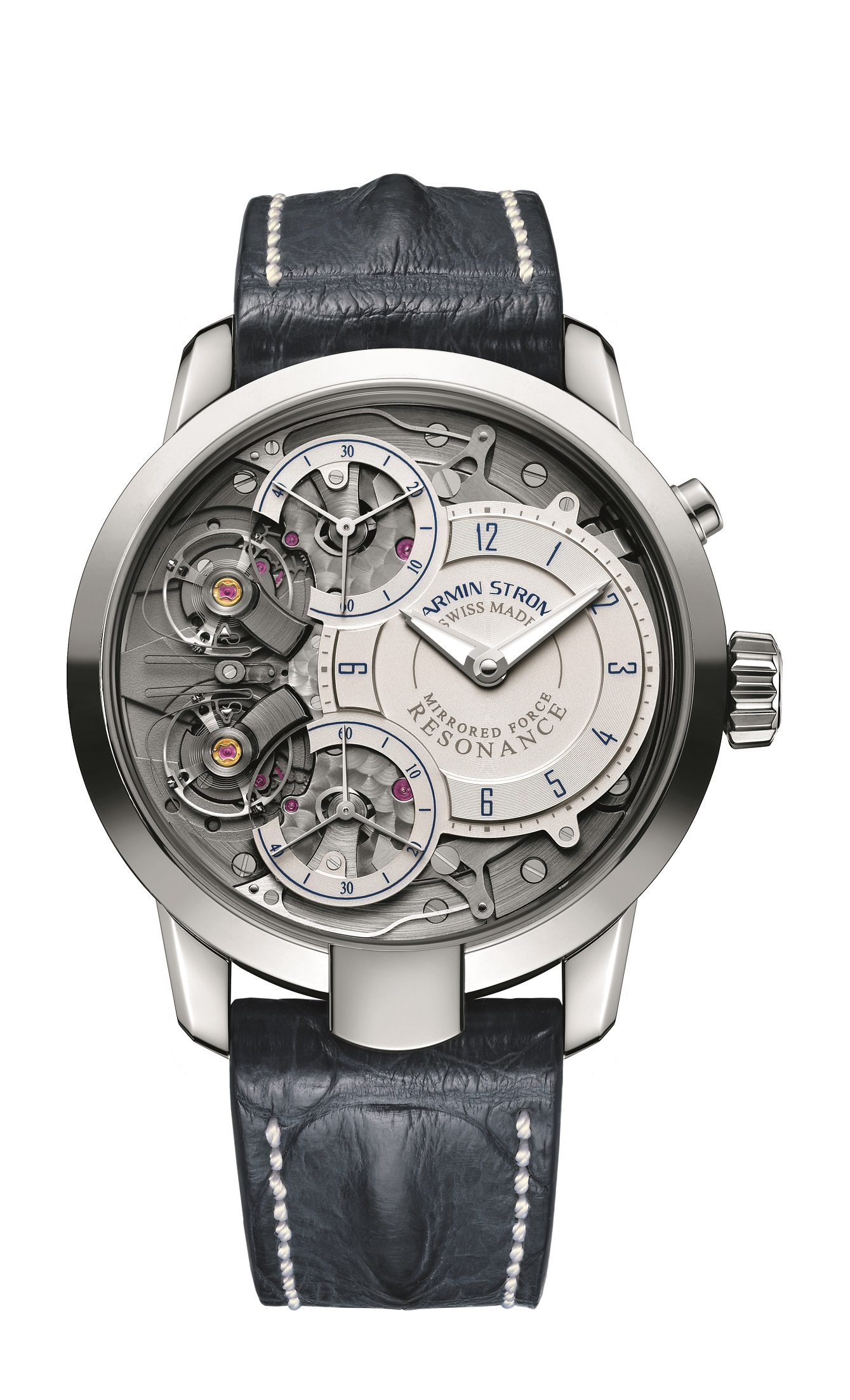 Two oscillating bodies in close proximity influence each other and eventually synchronize; this is a phenomenon of physics known as resonance. Towards the end of the year 2016, Armin Strom introduced the Mirrored Force Resonance, a resonating dual regulator developed for maximum precision with its whole captivating mechanism on full display dial side.
Since there are only very few wristwatches which use the principle of resonance, Armin Strom has joined an exclusive club with using – and mastering – this sophisticated horological technique.

The two connected oscillators of the ARF 15 Calibre make their revolutions in opposite directions, one rotating clockwise and the other counterclockwise. After winding, the twin balance wheels need approximately 10 minutes to become synchronous. The calibre works with 25.200 vph and provides a power reserve of  48 hours after being fully wound. 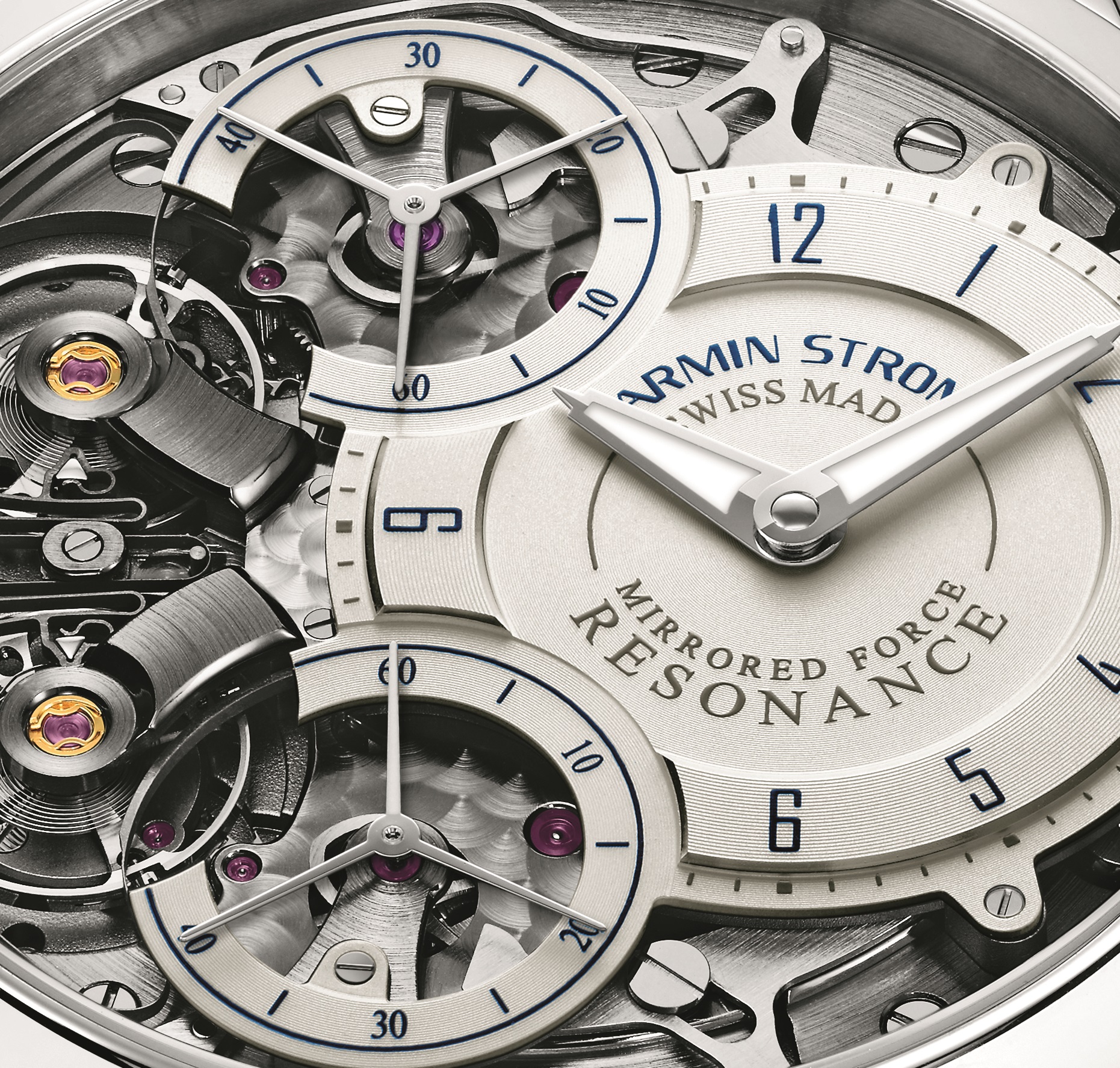 Apart from the material of the case, the style and size remained the same. The Mirrored Force Resonance in steel comes with a diameter of 43.4 mm and a height of 13 mm. It is water-resistant up to 50 metres.
At 2 o’clock you will find a case band pusher. it resets the twin seconds’ displays to zero, simultaneously resetting the twin balance wheels.

Armin Strom has equipped the Mirrored Force Resonance in Steel with a dark blue alligator strap, dedicated to the element of water.
The manufacturer is known for producing four versions of many of his watches, dedicated to the four elements. We are really looking forward to what will come next after fire and water and how these versions will not only look but fit in with the rest of the collection.