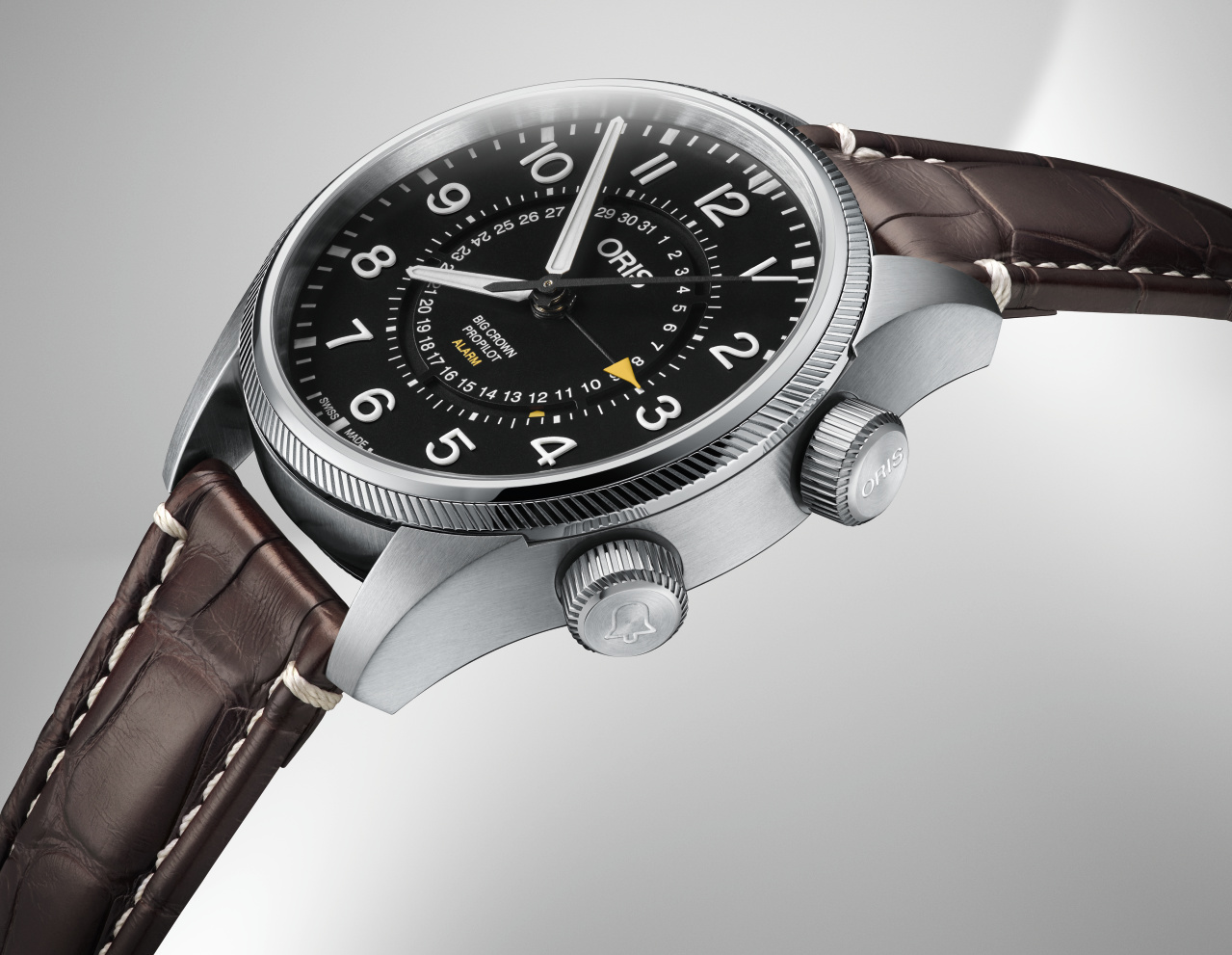 Oris revived one of its most hirstorc complications, the mechanical alarm. The new Big Crown ProPilot Alarm Limited Edition breathes new life into a complication that Oris first introduced in the 1940s. Fans of the manufacturer will be pleased that Oris has based the new Alarm on the Big Crown ProPilot, the company’s iconic pilot’s watch.
After all, the story of Oris is closely linked to that of the aviation. The company was founded in 1904, at the dawn of aviation, and made its first pilot’s pocket watch in the early 1910s. That was followed by the company’s first pilot’s wristwatch in 1917. The Oris Big Crown debuted in 1938 with its oversized crown that allowed gloved airmen to make adjustments quickly and easily. Today, Oris’s pilot’s watch collection is full of watches that delights pilots and watch enthusiasts equally. 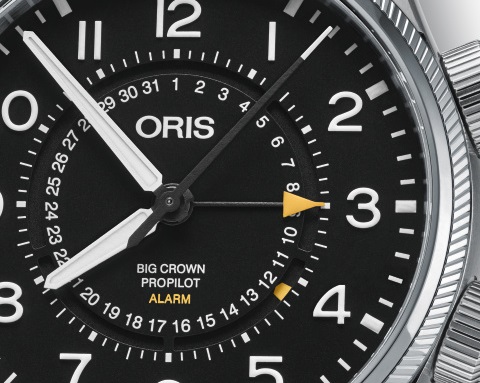 The Big Crown ProPilot Alarm Limited Edition is the latest expression of Oris’s pilot’s watch tradition. The watch has two distinctive features. The first is its alarm, indicated by a central pointer hand with a bright yellow tip. The alarm can be set to the nearest 10 minutes against a scale that runs around the outside of an aperture in the middle of the dial. That aperture houses the watch’s second key feature, a circular date display. Underneath it is a rotating disc with a yellow date marker that makes a full tour of the dial once every 31 days.
As mentioned before, the Big Crown ProPilot Alarm Limited Edition is aesthetically based on the familiar design of the Big Crown ProPilot. In this case, the watch has two stainless steel oversized crowns, one to set the time between 2 and 3 o’clock, and a second to set the alarm between 3 and 4 o’clock. Both crowns are made of stainless steel and screw to ensure the watch’s water resistance to 10 bar.
Otherwise, the watch retains the recognisable ProPilot look. Its signature bezel motif is inspired by jet engine turbine blades; the classic round stainless steel case and tapered lugs give the watch its stylish gait; and the fundamental dial design elements, such as the straight-edged hour and minute hands and large, luminescent Arabic numerals, remain clear and functional. 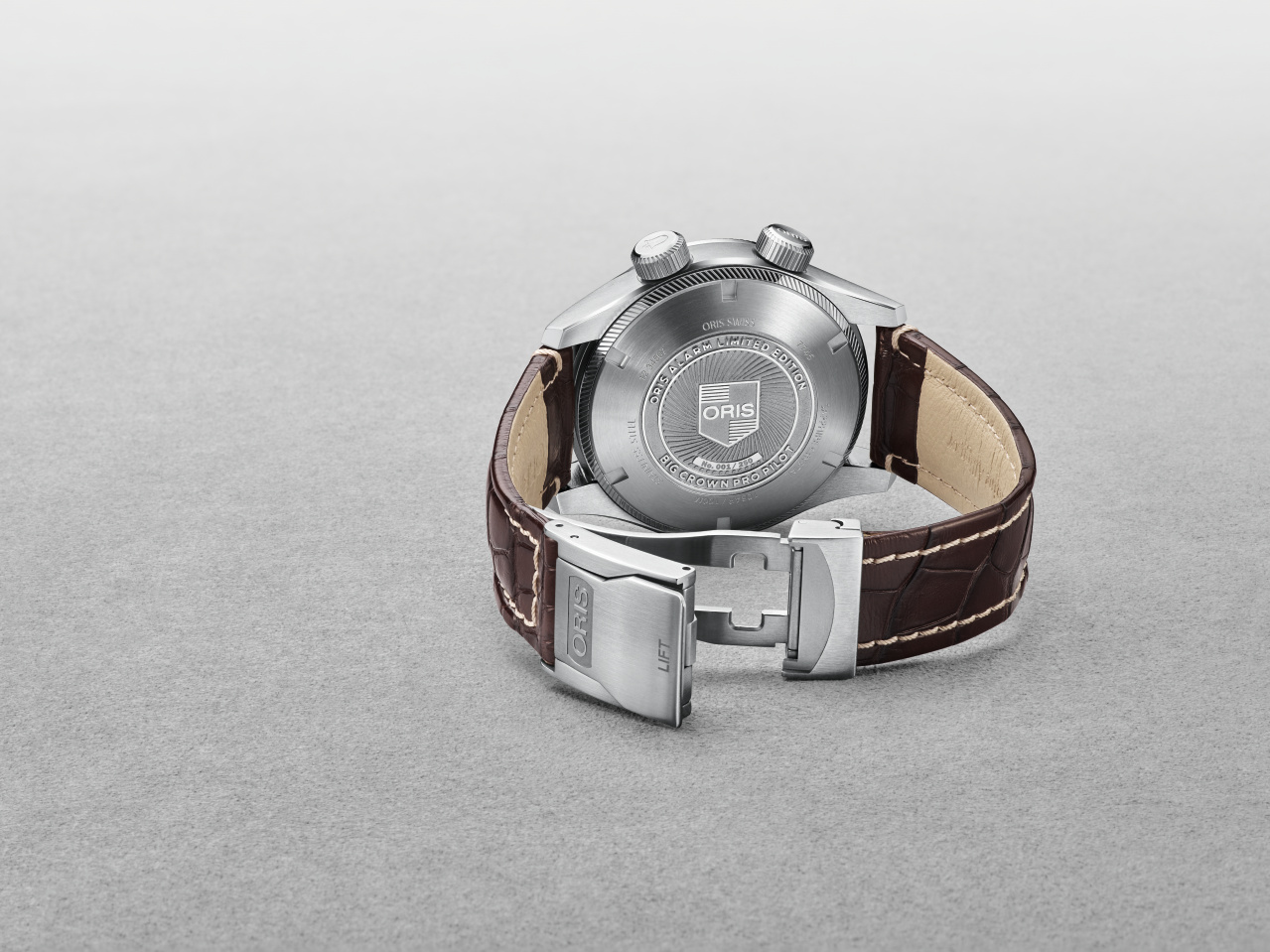 The case houses the Swiss Made automatic movement Oris Kal.910.

The Big Crown ProPilot Alarm Limited Edition comes on a dark brown croco leather strap with a stainless steel folding clasp.
Oris will only be making 250 pieces of this watch.