Urwerk, widely known for its unusual watches and exciting time displays just introduced a new version of its UR-210. Nobody can the deny the appeal – and the success – of this model.
Urwerk presents this masterpiece in a black platinum version, in keeping with a tradition held since its foundation. May we introduce: the UR-210 Black Platinum. 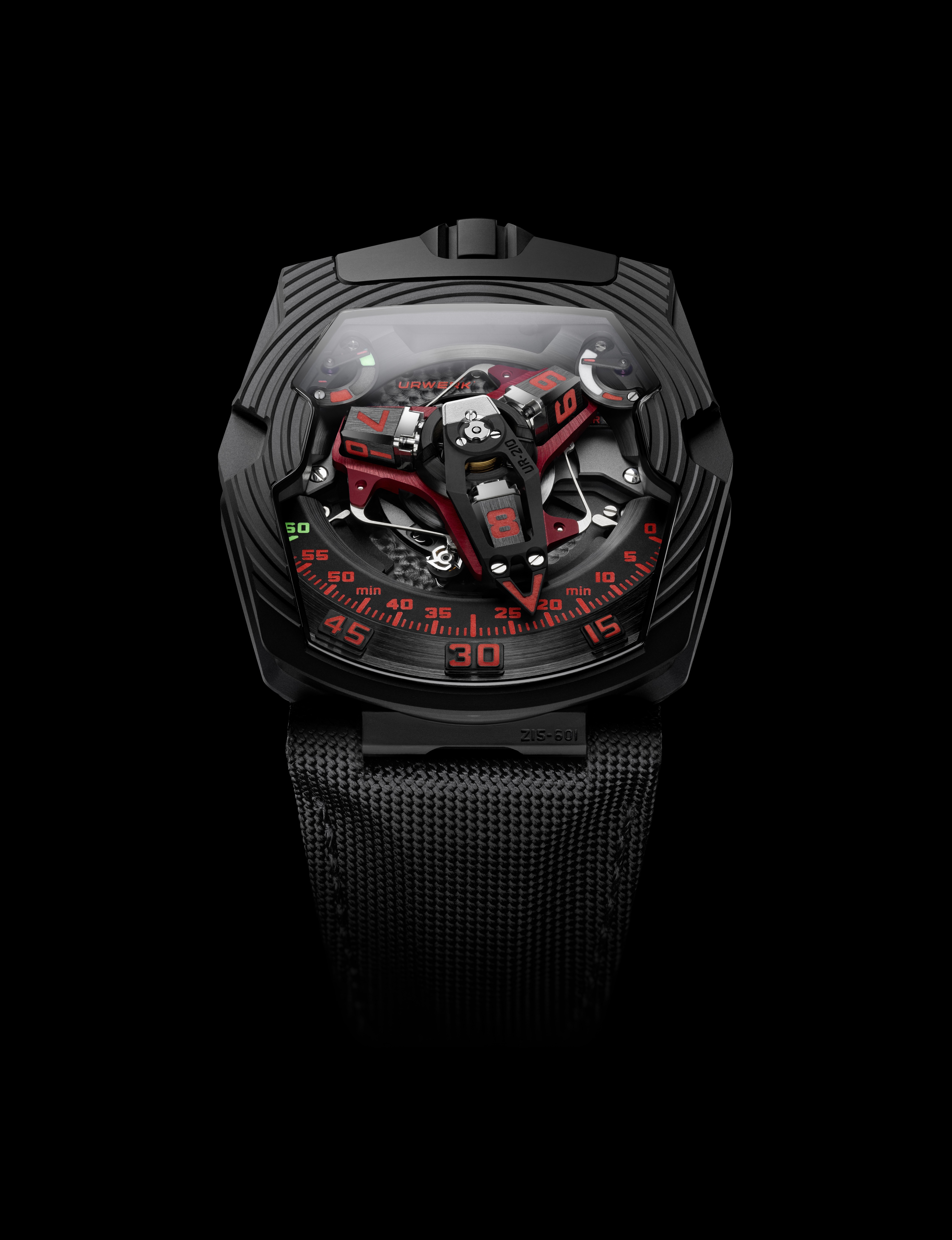 You have to keep your eyes glued to the dial as the minute hand approaches the end of its hour. Don’t blink our you’ll miss a display of controlled energy in the lighting return of the retrograde hand as it snaps back to the start of the next hour. The action is too swift for the eye but you hear the sharp click that announces the arrival of the hand on exactly zero. Raw power, masterful restrained and controlled.
The combination of the revolving satellite complication and retrograde minutes is seen nowhere as in the UR-210. The prominent three-dimensional minute hand acts as a high-tech cowling that encloses the hours and carries them in turn smoothly across the minute scale.

The speed of the flyback depends on three key factors: The central hub ensures that the mechanism remains stable and constitutes the rock on which the entire complication rests. A cylindrical spring along the shaft accumulates the power for the retrograde function. The unusual minute hand that acts as a cowling to transport the hours has equally uncommon dimensions. Machined in aluminium, it is perfectly balanced by a brass counterweight. A double co-axial cam in the shape of a star governs the retrograde action. Its gearing and its rotation determine the trajectory of the minute hand. 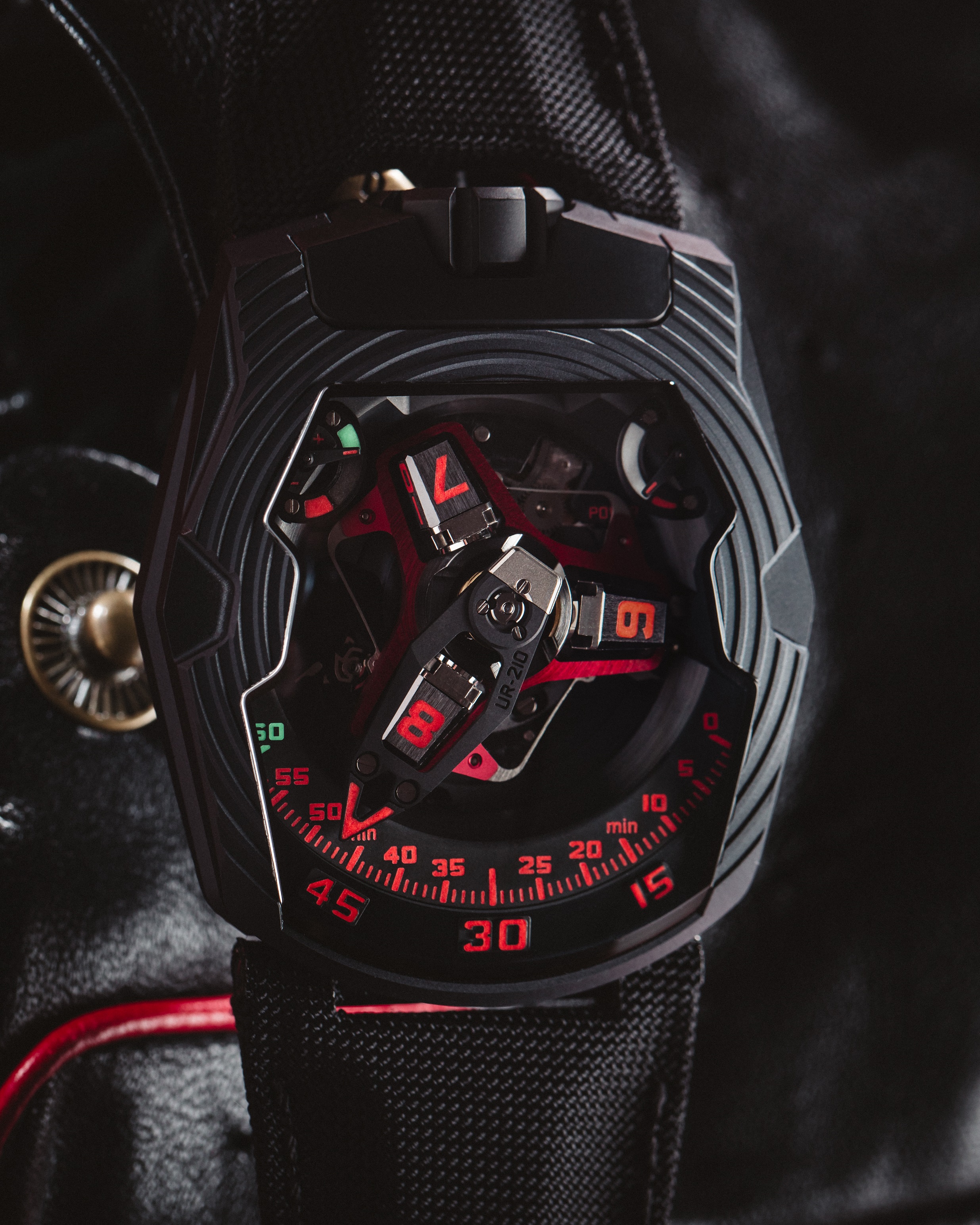 The dial of the UR-210 Black Platinum also features a power reserve indicator at 1 o’clock and opposite at 11 o’clock there seems to be a second one. But it is, in fact, a similar indication which is also very different. It shows the winding efficiency during the last two hours. This feature is the world’s first! It calculates the energy flow, the ratio between the energy generated and consumed. If you’re sitting comfortably in a chair, not moving much, you’ll see the hand of the winding efficiency indicator move slowly towards the red sector. Then it’s time to adjust the winding rate. The adjuster for this feature is on the back of the watch. If it’s switched to “Full” the rotor becomes sensitive to the slightest motion, on “reduced” it absorbs some of the energy created by the rotor. In the “Stop” position, the UR-210 becomes a manually wound watch.
The calibre UR-7.10 works at a frequency of 4 Hz.

The case is designed in a way that it appears to have reacted to the force of the flyback minutes, developing a series of regular shock waves radiating from the dial. The deep furrowed arcs also accentuate the beautiful hexagonal design of the case which is water resistant up to 3 atm.

The UR-210 Black Platinum is a limited edition of 25 watches. 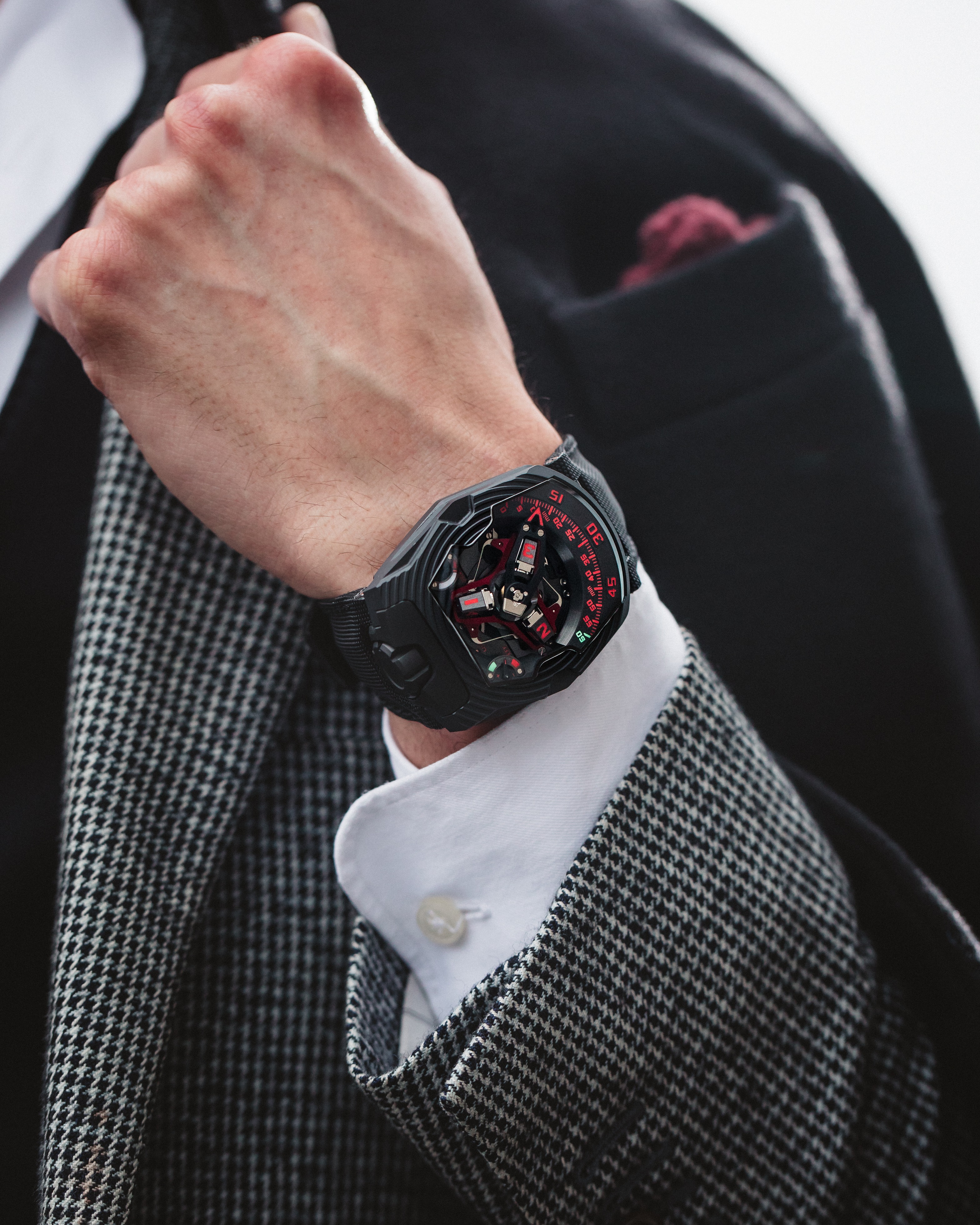