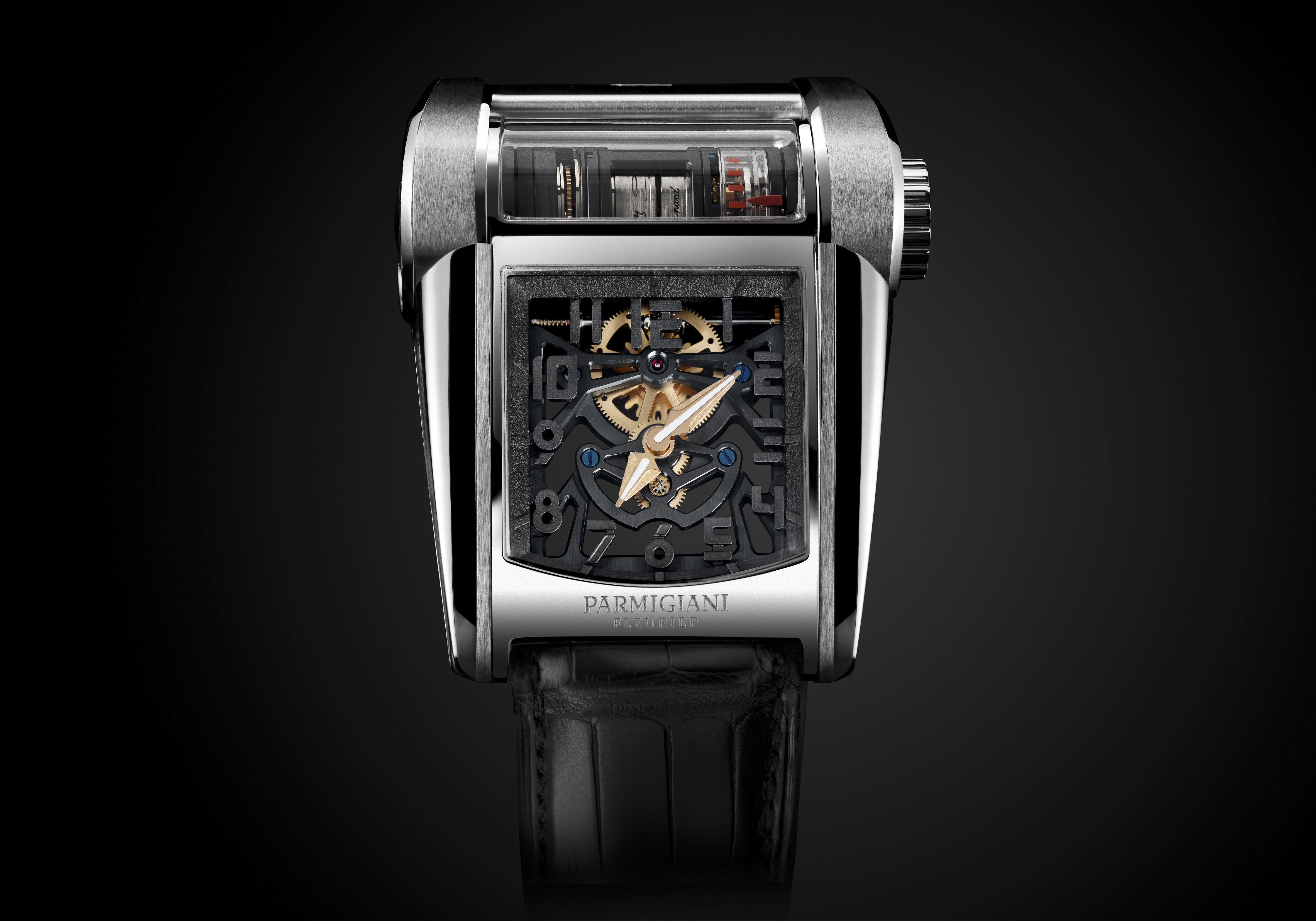 This month, Parmigiani Fleurier introduced a wristwatch inspired by a car – so fundamentally, that it comes with an engine, a driver’s cab and a bodywork. The Bugatti Typ 390 is a tribute to the Bugatti Chiron. This car stands out due to its extreme power, reliability and performance – could there be a better inspiration for a watch?
Parmigiani Fleurier has teamed up with Bugatti in 2004 and since then the watch manufacturer has challenged the traditional Haute Horlogerie with daring new models, each inspired by a luxurious car. It all began with the Bugatti Type 370 and Parmigiani Fleurier continued to stay on its pioneering path ever since. 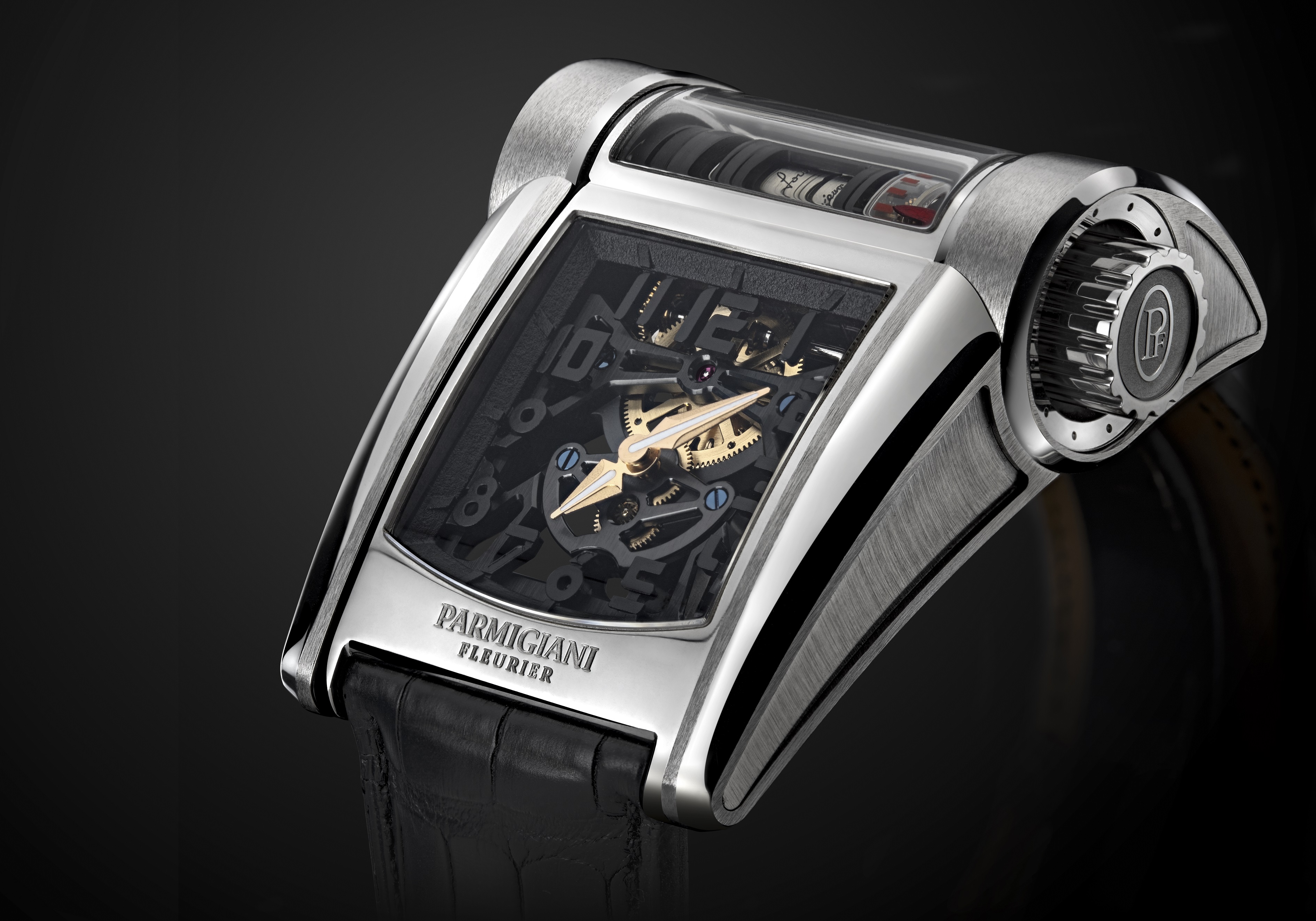 Inspired by the principles behind the construction of the Chiron, the designers chose an engine/interior/bodywork design. Specifically, the horizontal cylindrical movement (the engine) is connected by a worm screw to the dial and the displays (the interior) which are positioned perpendicularly. The entire assembly is enveloped in a gold and sapphire crystal case (the bodywork) through which the moving mechanism can be admired.
The black open-worked dial makes the Bugatti Type 390 a lightweight yet high-performance timepiece. The luminescent applique indices and hands create a stark contrast to ensure optimal legibility. The seconds can be read through the magnifying effect of the sapphire crystal at the end of the cylinder.

Inspired by the fluid curves of the Bugatti Chiron, the case of the Bugatti Type 390 is created from gold and engraved on the back with a serial number.The case was created by Les Artisans Boîtiers and is constructed around the cylindrical structure and is water resistant to 3 atm. It stands out thanks to its ability to pivot 12° around its drive shift (patent pending) to ensure perfect ergonomics around any wrist.
Large openings topped with sapphire crystal allow the wearer to admire the technical sophistication of the timepiece: via the top and the end of the tubular structure one can dive deep into the heart of the complex mechanisms – the “engine” and the flying tourbillon – while the openings over and under the dial reveal the watch’s many gears and enable the time to be read. 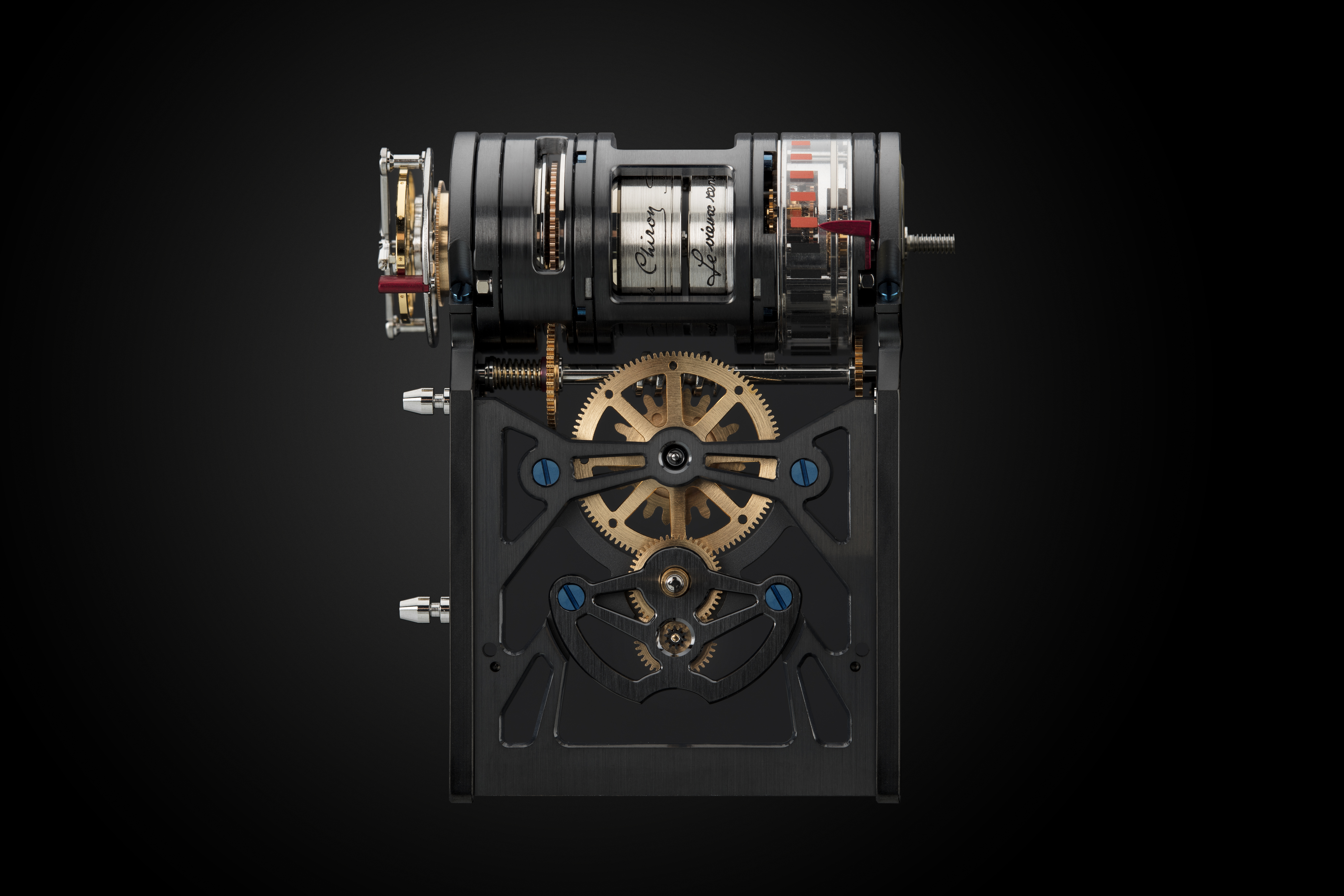 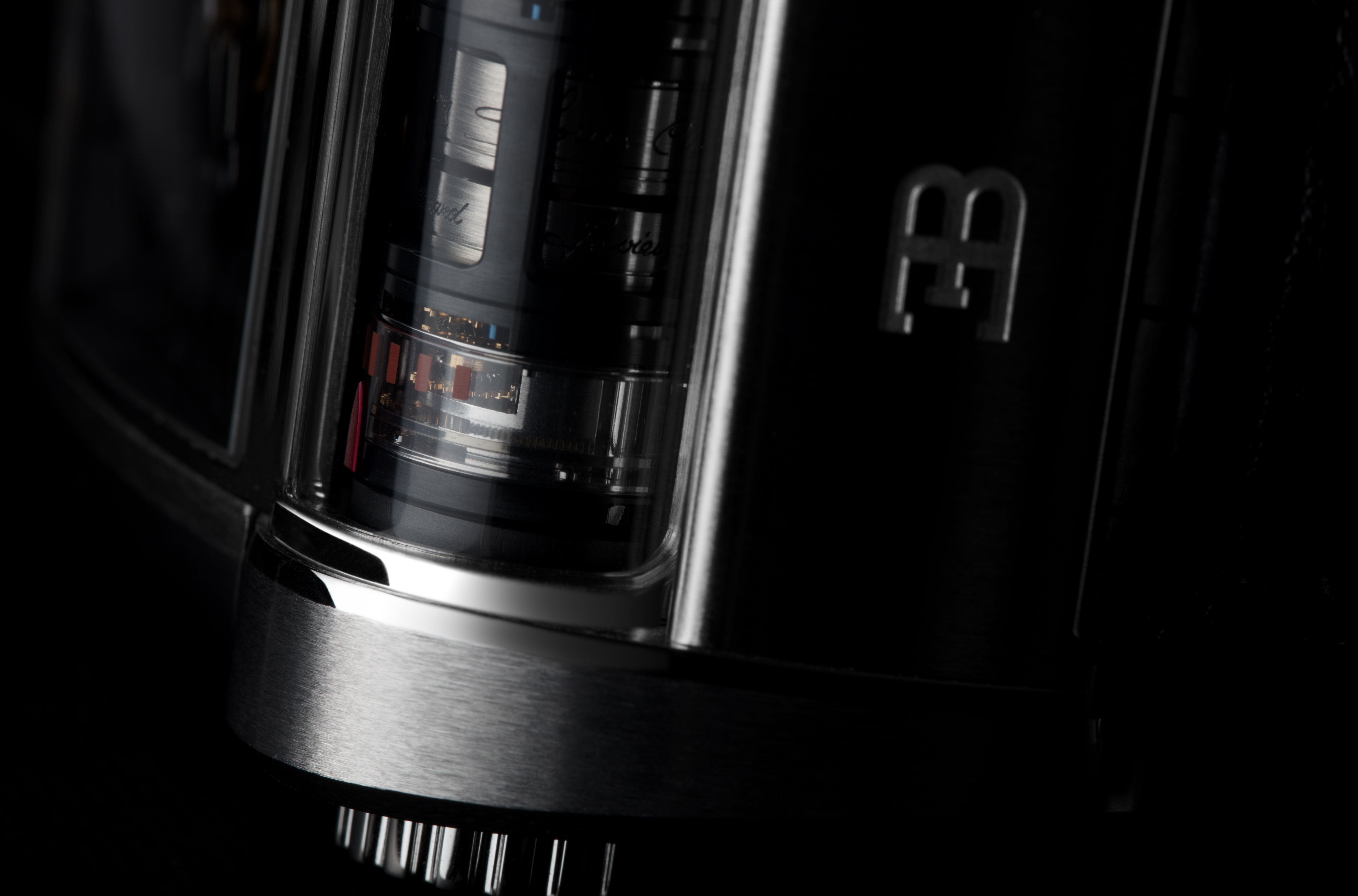 The mechanical, cylindrical PF390 movement is equipped with a flying tourbillon. Specially developed for this watch, the calibre is housed in a cylinder boasting an 80-hour power reserve thanks to its two series-mounted barrels.
Parmigiani has slimmed down the movement to a point where its diameter is no larger than the regulator of its 60-second tourbillon. In view of the cylindrical configuration of the movement, the usual wheel-pinion-wheel-pinion configuration is replaced by a transmission using three planetary gear trains. Each of these is equipped with a central train wheel. Another key point is the fact that the assembly requires no lubrication: a significant advantage in terms of reliability and maintenance. The series-type coupling of the two barrels guarantees a constant transfer of energy. The flying tourbillon oscillates at a frequency of 4 Hz.
In light of the watch’s innovative features and the unique solution it offers, the calibre PF390 heralds a new era in Parmigiani Fleurier’s Bugatti collection. It has been designed and created to become the platform for development of future Bugatti models.

The alligator leather strap is made by Hermès and fitted with a gold folding buckle. Parmigiani Fleurier has limited this watch to a edition of 20 pieces – 10 pink and 10 white gold versions.
It is clear that the Bugatti Type 390 is far more than a watch stamped with a car marque logo; it is the Bugatti Chiron reborn in watch form. 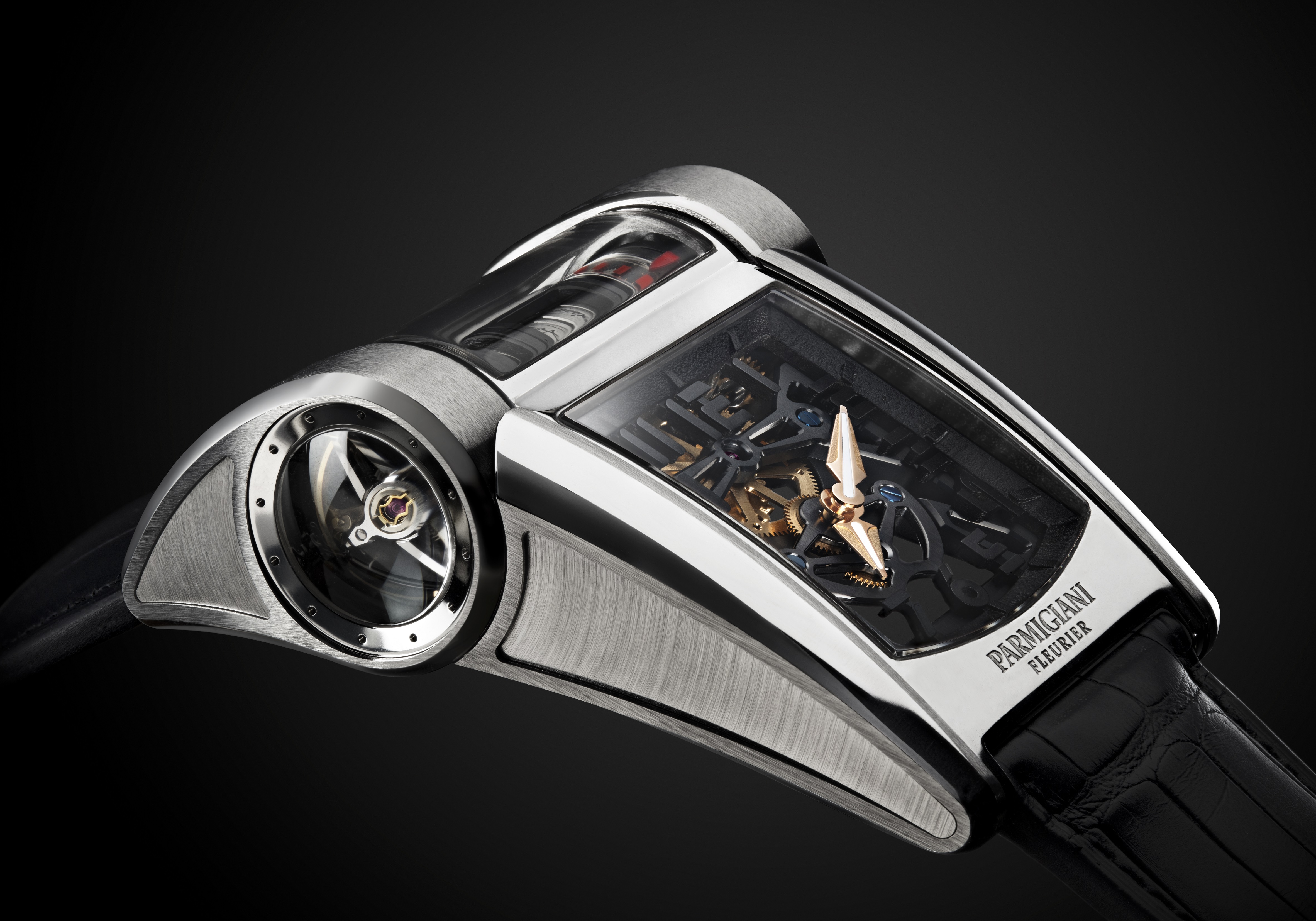